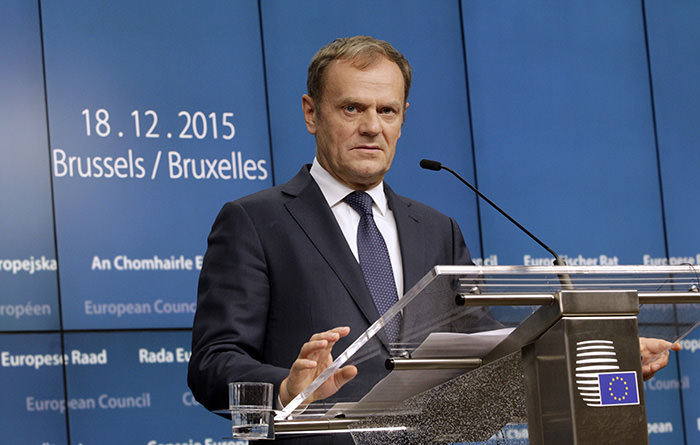 by Anadolu Agency Dec 21, 2015 12:00 am
European Union has prolonged economic sanctions on Russia by six months after the Minsk agreement, which aims to end the conflict in eastern Ukraine, remains unimplemented, it was announced Monday.

The Council of the European Union said in a statement on its website Monday that sanctions were supposed to come to an end on Jan. 31, 2016, but they were prolonged until July 31, 2016.

The council said that the duration of the sanctions was linked to the complete implementation of the Minsk agreements, which was foreseen to take place by Dec. 31, 2015.

"However, since the Minsk agreements will not be fully implemented by Dec. 31, 2015, the duration of the sanctions has been prolonged whilst the council continues its assessment of progress in implementation," the statement said.

About the sanctions, the council said: "They target certain exchanges with Russia in the financial, energy and defense sectors and in the area of dual-use goods".

EU sanctions were first imposed in July 2014 in response to Russia's annexation of the Crimean peninsula from Ukraine and over its support of pro-Russian separatists in eastern Ukraine.

"Suspension of sanctions, which were agreed after the annexation of Crimea in violation of the international law are of course not up for debate for the time being," Merkel said in her address at the parliament ahead of the EU leaders' summit Thursday.

Ukraine and Russia, with the mediation of France and Germany, signed the Minsk cease-fire agreement on Feb. 12, which includes the withdrawal of heavy weaponry from combat areas, and of all foreign armed formations; the release of all hostages and unlawfully detained persons as well as political reforms and decentralization in the eastern Ukrainian regions.

More than 9,000 people have lost their lives due to conflict between the Ukrainian government and pro-Russian rebels since mid-April 2014, according to the UN.
Last Update: Dec 21, 2015 5:50 pm
RELATED TOPICS