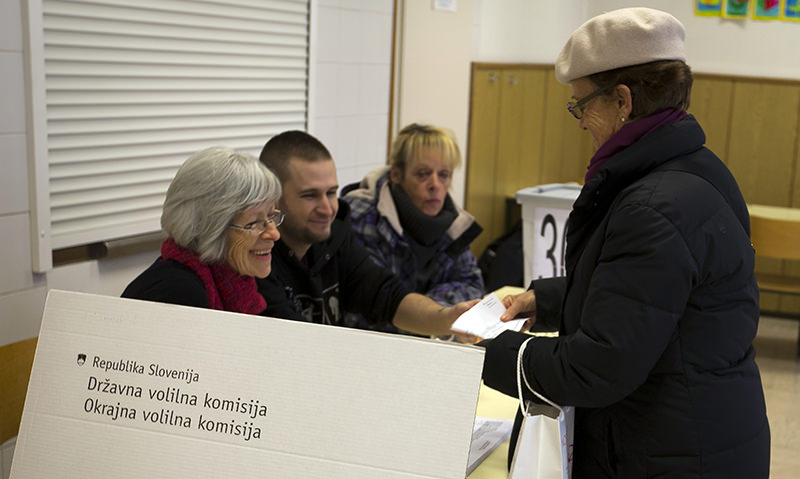 A voter is registered at a polling station in Ljubljana, Slovenia, Sunday, Dec. 20, 2015 (AP Photo)
by Dec 21, 2015 12:00 am
More than 60 percent of Slovenian voters opposed legalizing gay marriage in a referendum Sunday marked by low turnout, according to near-complete results from the electoral commission.

The outcome marked a setback for gay rights activists who had hoped to see the largely Catholic nation become Europe's first ex-communist country to give same-sex couples the right to marry and adopt.

With 99.9 percent of ballots counted, 63.48 percent of voters said 'no' to approving the legislation, which already passed in parliament earlier this year.

More than 1.7 million people were registered to vote on an issue that has stoked heated debate in the former Yugoslav republic, but turnout was low at just 36.18 percent.

For the outcome to be legally valid, opponents of the law needed to muster the support of at least 20 percent of registered voters -- the equivalent of at least 342,000 votes. They ended up garnering 391,818, the commission said.

According to Ljudmila Novak, a senior member of the conservative Nova Slovenija party, said the "message is clear".

"We need to protect the rights of children," she said. "We agree with providing the appropriate rights for homosexuals, while preserving the family as the primary environment for children."

In March, parliament approved legislation redefining marriage as a "union of two" instead of a "union of a man and a woman", granting homosexual couples the same rights as their heterosexual counterparts, including the right to adopt children.

But opponents immediately launched a campaign to reverse the changes, meaning the legislation never came into force and no same-sex couples were able to tie the knot.

A group called "Children Are At Stake" managed to gather the 40,000 signatures necessary to force a referendum.

He said last week he encouraged "everyone, especially those with public responsibility, to support the family, a structural reference point for the life of society".

Same-sex marriage has already been legalised in 18 countries, including 13 in Europe. Ireland last May became the first to approve gay marriage through a referendum.

"I voted yes. Love is love, regardless of everything," said a 24-year-old woman called Ida in the southwestern port city of Koper.

The issue had proved divisive among Slovenians, especially concerning adoption.

On the wall of a church centre near one polling station, someone had scrawled: "Would you take a homosexual donor's blood to save your child?"

Another pensioner said while gay couples should be given equality as far as marriage was concerned, that should not include the right to adopt children.

"They are people like us, they should be given all rights, but not (the right to adopt) children," said 76-year-old Ema.

Slovenian voters already rejected gay marriage once before, in a 2012 plebiscite.

Sunday's renewed rejection means the civil code will revert to limiting marriage to strictly between male and female couples, and parliament may not propose any new measures seeking to introduce same-sex marriages for the next 12 months.

Existing legislation which allows registered civil partnerships but not adoption will remain in force.

Slovenia has long been ahead of its peers, joining the EU in 2004 -- nine years before neighbouring Croatia -- and the eurozone in 2007 as its first ex-communist member, but its society retains a strong traditionalist streak.

Both Slovenia's president and prime minister had backed the 'yes' camp in the referendum.

Violeta Tomic, a lawmaker from the leftist United Left party that had first proposed the same-sex law, vowed to keep up the fight despite Sunday's setback.