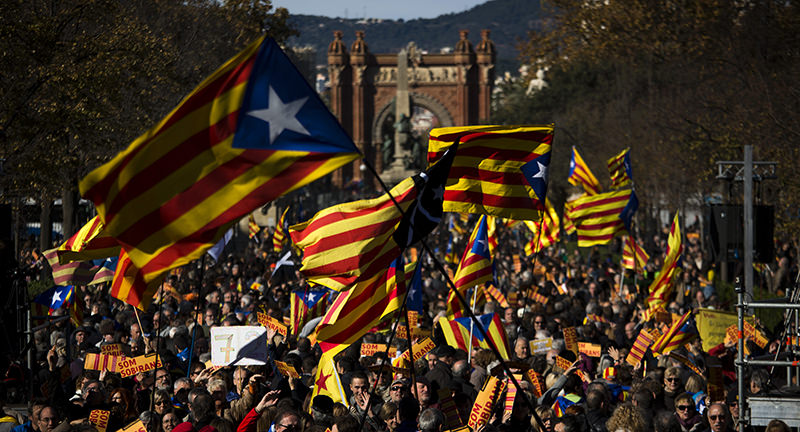 In this Nov. 22, 2015 file photo, pro Independence demonstrators wave ,esteladas, or pro independence flags, during a demonstrations to show public support for the Parliament of Catalonia, in Barcelona (AP Photo)
by Compiled from Wire Services Dec 22, 2015 12:00 am
Catalonia's separatists have reached a preliminary deal to form a pro-independence regional government, they said on Tuesday, creating a new headache for Spain's central government just as it is busy dealing with the fallout of an inconclusive election.

Parties Junts pel Si and CUP said the deal contemplated an economic plan as well as the investiture of acting regional head Artur Mas as the next president of Catalonia. The CUP party will have to rubber stamp the deal in an assembly on Sunday.

Sky-high unemployment, inequality, corruption and an ever-rising separatist drive in the northeastern region of Catalonia were just some of the issues at stake in a country deeply scarred by the financial crisis and fed up with what many considered a staid political scene.

After holding talks with the leaders of each party that has won seats in parliament, King Felipe VI, the head of state, will nominate a prime minister -- most likely Rajoy.
Last Update: Dec 22, 2015 3:01 pm
RELATED TOPICS