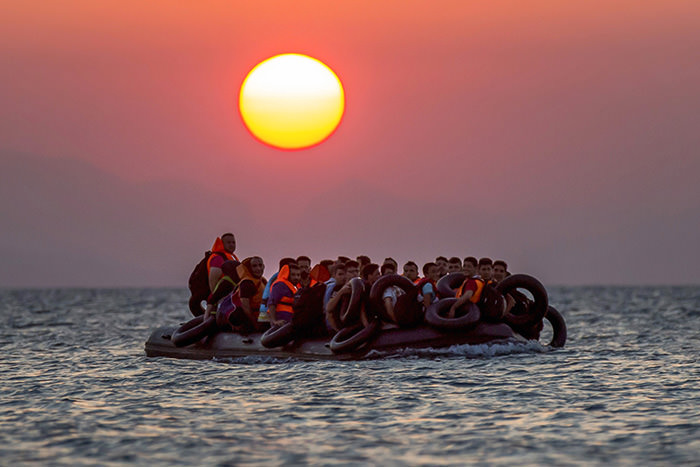 After the International Organization for Migration announced that more than 1 million refugees arrived in Europe in 2015, it also said people smugglers made at least $1 billion

More than 1 million refugees and migrants entered the European Union this year, while almost 3,700 died or went missing in perilous journeys that reaped huge profit for smugglers, the International Organization for Migration (IOM) said on Tuesday.

"This is three to four times as many migrants and refugees coming north as we had in 2014, and the deaths have already far surpassed the deaths last year," IOM chief William Lacy Swing told Reuters. Almost all those arriving came across the Mediterranean or the Aegean seas, and half were Syrians fleeing the war. Another 20 percent were Afghans, and 7 percent were Iraqis, IOM and the United Nations refugee agency UNHCR said in a joint statement.

People smuggling operations probably accounted for the majority of journeys and likely earned at least $1 billion, Swing said, taking "anywhere from $2,000 to maybe $6,000 depending on how many members of the family and depending on which smuggling ring it is." The IOM estimates people smugglers in Europe have made $10 billion or more since 2000, maybe much more. "They are certainly getting very well paid for their services," Swing said. Out of a total of 1,005,504 arrivals to Greece, Bulgaria, Italy, Spain, Malta and Cyprus by Dec. 21, the vast majority – 816,752 – arrived by sea in Greece, the IOM said.

IOM spokesman Joel Millman said it was impossible to forecast how the flow of migrants would evolve in 2016. "So much is in the balance, the resolution of the Syrian war, and the disposition of the European border protection moves that are being contemplated," he said. "We never thought it would reach this level. We just hope people are treated with dignity."

The record movement of people into Europe is a symptom of a record level of disruption around the globe, with the numbers of refugees and internally displaced people far surpassing 60 million, UNHCR said last week.

Swing said the war in Syria was only one among many causes, including Ebola and Boko Haram in West Africa, an earthquake in Nepal, conflicts in Libya, Yemen, South Sudan, Central African Republic, Afghanistan and Iraq. "No wonder you have such a large flux coming north. This is an unprecedented scale of simultaneous complex, protracted disasters from the western bulge of Africa to the Himalayas, with very few stable, peaceful spots in-between."

U.N. refugee chief Antonio Guterres called on Friday for a "massive resettlement" of Syrian and other refugees within Europe, to distribute many hundreds of thousands of people before the continent's asylum system crumbles.

Last month, arrivals dropped by more than a third when compared with October, making it the first month with a downward trend this year, according to the UNHCR. The decrease was due to colder temperatures and Turkish efforts to stop people smugglers, agency spokesman William Spindler said.

The turmoil in the Middle East and the five-year-long war in Syria have led many people to flee the conflict in an attempt to seek security and shelter in a more prosperous and peaceful country, such as those in the EU. The Syrian war has made the country the world's single-largest source of refugees and displaced people, as more than 4.3 million Syrians are now refugees and at least 7.6 million have been internally displaced since the war erupted in March 2011, according to U.N. figures. It has also claimed more than 250,000 lives. Neighboring Turkey, which is now has the largest refugee population in the world, has spent nearly $8 billion for more than 2 million Syrian refugees in the country.