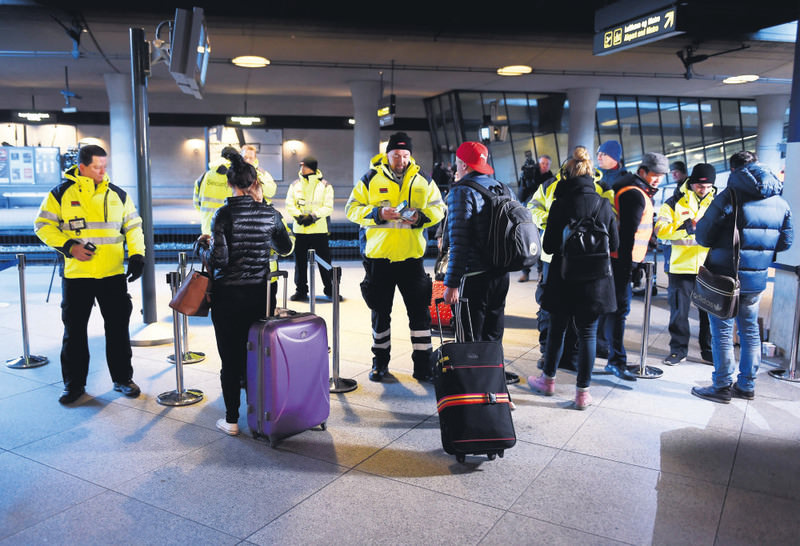 Sweden reintroduced border controls and identity checks went into effect for travelers from Denmark to Sweden for the first time in more than 50 years, another blow to Europe's passport-free Schengen zone

For the first time in half a century, Sweden was demanding photo identification for all travelers from Denmark in a drastic move to stem an unprecedented influx of refugees.

Extra security staff were on hand to oversee the new border controls on the Danish side of the Oresund bridge-and-tunnel link, a major entry point for migrants and refugees hoping to start a new life in Sweden. Marten Jegenstam, a 41-year-old consultant who lives in Denmark but works in Sweden, said that controls were needed. "I think we need some control (over our borders) but it needs to be very smooth, the commuting back and forth requires balance," he said.

Under the new rules, rail passengers will have to exit the train and clear checkpoints before boarding the train again. Those without valid ID will be refused entry. Travelers had been warned to expect long queues and delays in the afternoon when many commuters began returning to Sweden from their jobs in the Danish capital city. The measures aim to keep out undocumented migrants and come after Sweden - which has taken in more asylum seekers per capita than any other European nation - said it could no longer cope with the unregulated flow of new arrivals.

A temporary fence has already been erected at Copenhagen airport's Kastrup station, where trains will be stopped for mandatory controls. "It's as if we are building a Berlin Wall here. We are going several steps back in time," said Michael Randropp, a spokesman for the local Kystbanen commuters' association. The re-introduction of border controls means that travelers between the two Nordic countries will have to show photo ID for the first time in more than 50 years and deals yet another blow to Europe's cherished passport-free Schengen system.

Several other European Union countries, including Germany, Austria and France, also re-imposed border checks last year as the continent grappled with its biggest refugee crisis since World War II. More than 1 million migrants reached Europe in 2015, most of whom were refugees fleeing war and violence in Syria, Afghanistan and Iraq, according to the United Nations refugee agency.

Sweden, a country of 9.8 million people known for its generous asylum policies, took in an estimated 160,000 asylum seekers last year alone. But the inflow has strained the country's capacity to take care of the newcomers and authorities recently warned they would no longer be able to provide housing for everyone. As the public mood shifted, the government began reversing its open-door policy.

Some temporary border controls were already re-introduced on Nov. 12, after which the number of weekly arrivals dropped from a peak of 10,500 to some 3,500 by mid-December, according to Sweden's Migration Agency. In a further attempt to regain control over the flood of people arriving via Denmark, the Swedish parliament last month passed a temporary law making transport companies responsible for ensuring that those arriving via the eight-kilometer Oresund crossing carry valid photo ID. Anyone who fails to provide the necessary documents will be turned back, and travel operators who fail to comply risk a fine. "I believe that these ID checks will be effective. More will have to seek asylum in other countries," Migration Minister Morgan Johansson recently told the Swedish daily Dagens Nyheter.

Aside from the inconvenience the checks are expected to cause - especially for the roughly 8,600 daily commuters between Copenhagen and the southern Swedish city of Malmo - the new measures threaten to cause financial difficulties for Danish travel operators.

Danish train company DSB has already threatened to levy a supplementary charge on passengers crossing the strait to cover the costs of the checks. And the Danish HH Ferries Group said it had reported Sweden to the EU for unfair competition after being required to pay for identity checks.

The company argues that the consortium operating the Oresund Bridge, which is partly owned by the Swedish government, was given special treatment because it was not required to help fund the measures. The border controls have also irked the Danish authorities, who are waiting to see if they will end up with a build-up of migrants stuck at their border.

The migration crisis has been a major point of contention between the two neighbors, with Denmark's right-wing government actively discouraging migrants and refugees from settling in the country. It took in about 18,000 asylum seekers last year.

Europe is in the midst of its biggest migration crisis since World War II, according to the U.N. The number of people forcibly displaced worldwide is likely to have surpassed 60 million by the end of this year, the U.N. said. The majority of migrants come from the Middle East and Africa. The turmoil in the Middle East and the five-year war in Syria have led many people to flee the conflict in an attempt to seek security and shelter in a more prosperous and peaceful country, such as one in Europe. However, Europe has been slammed for lacking a collaborative response to the crisis.
RELATED TOPICS