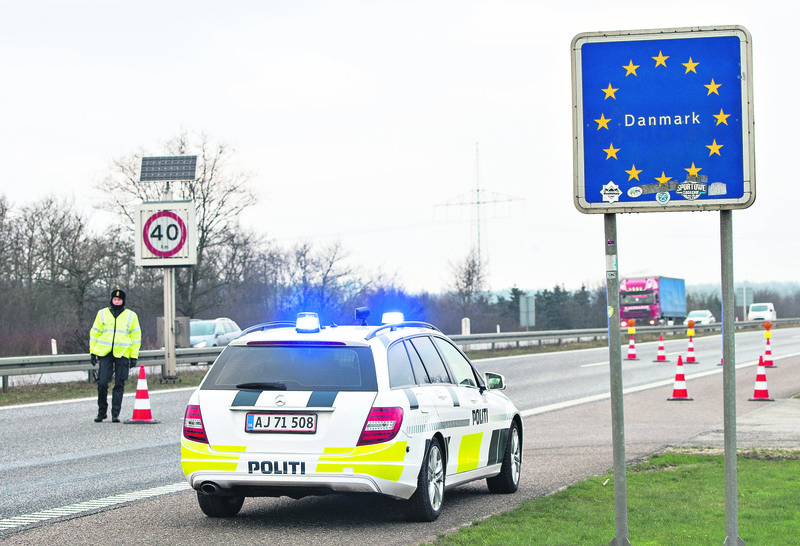 After Denmark announced new border checks at the German border and Sweden began checking travelers' documents from Denmark, Germany warned that the passport-free Schengen zone is in danger and said Europe needs a common strategy to stem the migrant influx

Germany warned on Monday that the passport-free Schengen zone was "in danger" after Nordic countries announced new controls at their borders to stem a refugee influx.

"Freedom of movement is an important principle - one of the biggest achievements (in the European Union) in recent years," foreign ministry spokesman Martin Schaefer told reporters. "Schengen is very important but it is in danger," he added when asked about Denmark's announcement of checks at the German border, on the same day Sweden introduced controls on its frontier with Denmark.

Sweden on Monday imposed controls on travelers arriving from Denmark in a bid to curb an unprecedented influx of refugees, prompting knock-on measures from Denmark. Hours after the Swedish controls on a major bridge-and-tunnel link with Denmark went into effect, the Danish government, which fears being saddled with large numbers of migrants, announced it would implement spot checks on its border with Germany.

Swedish Migration Minister Morgan Johansson defended his country's systematic controls, saying they were aimed at "preventing an acute situation where we can no longer welcome asylum seekers properly." The new measures mean travelers between the neighboring countries will have to show their ID cards for the first time since the late 1950s, when a Nordic agreement on passport-free travel came into force that predates the 20-year-old Schengen zone.

Last week Norway, which is not an EU member but does belong to the Schengen area, said it would start turning back refugees without visas arriving from elsewhere in the Schengen zone, particularly Sweden. Schaefer said it was "crucial that we in Europe find common solutions" to the worst refugee crisis since World War II, and said the EU must now focus on ensuring the security of its external borders.

Chancellor Angela Merkel's spokesman, Steffen Seibert, said that the Schengen accord, which provides borderless travel across most of the 28-nation EU, was dependent on better protection of the EU's frontiers. "We need a common strategy," he said.

Seibert said that Danish Prime Minister Lars Lokke Rasmussen had informed Merkel of his decision before making the announcement. The migrant crisis, which saw some 1 million people flooding into Europe in 2015, mostly via Greece and Italy, has sorely tested Europe's commitment to free movement, with several EU members temporarily re-imposing border controls as they try to slow the influx.

Rasmussen warned that Sweden's controls could have a domino effect on Denmark, which received just 21,000 asylum requests in 2015, compared to Sweden's 163,000. "It's clear the EU is not able to protect its outer borders and other countries are going to be forced to introduce ... border controls," he said, adding: "Europe's leaders must react to this."

Seibert said that Germany, which took in around 1 million migrants in 2015, had in September also implemented such measures and acknowledged that the Schengen rules allowed such steps in extraordinary circumstances. Up to 300 asylum seekers leave Germany each day for Denmark, according to Berlin, many of them headed for Sweden, which has received more migrants per capita than any other EU state.

Six countries in Europe's document-free travel area now have wide-ranging border checks in place following Denmark's decision on Monday to tighten controls on its southern border with Germany. In addition to Denmark and Sweden, others to reintroduce checks to cope with mass flows of migrants are Austria, Germany and Norway, which is not a European Union member. France has them in place due to the attacks in Paris.

The EU estimates that more than 1.5 million people crossed Schengen area borders in an "irregular" way last year. The arrival of hundreds of thousands of people in Greece and Italy totally overwhelmed their border authorities, leaving many free to try to move further north to preferred destinations like Germany and Sweden. As those nations feel the pressure, they have sometimes tightened their southern borders, creating a domino-like effect back down the line.

Countries fearing for public safety due to unpredictable migrant movements must give notice of their intentions to the European Commission, which supervises the Schengen rulebook. They can introduce checks for up to 30 days at a time for a maximum of six months. If they want to move faster and don't give enough notice, like Denmark, they can initially introduce checks for 10 days then extend that for periods of up to 20 days for two months. The Commission says the actions by Austria, France, Germany, Norway and Sweden are acceptable, as they are proportionate to the public security threat these countries might face. It is still assessing Denmark's decision and has not indicated when that assessment might be complete.
RELATED TOPICS