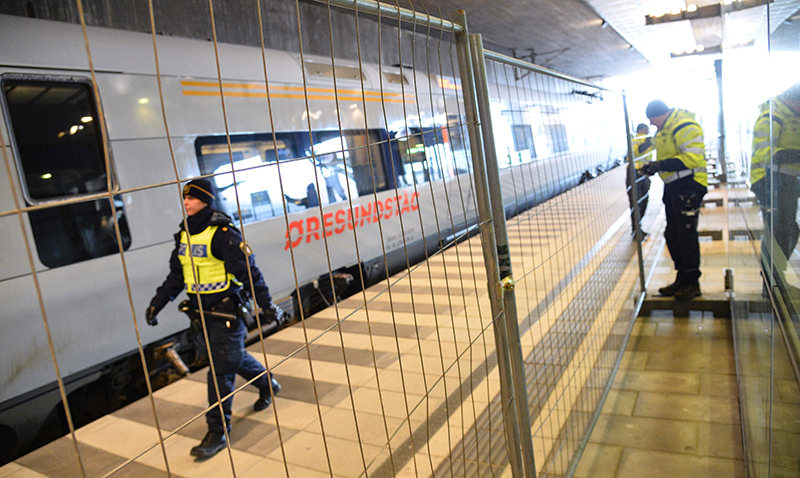 A temporary fence is erected between domestic and international tracks at Hyllie train station in southern Malmo, Sweden, on January 3, 2016 (AFP Photo)
by German Press Agency - DPA Jan 07, 2016 12:00 am
Swedish taxi drivers have been urged to check the identities of passengers they pick up in neighbouring Denmark to avoid potential charges of trafficking people, Swedish Radio reported Thursday.

The move followed Monday's decision to introduce identity checks for travellers from Denmark as part of measures to reduce the flow of refugees into Sweden.

Passengers boarding trains, ferries or buses bound for Sweden have this week had to show a passport or other form of valid ID card to be allowed onboard under the new rules. Transport companies are responsible for conducting the checks.

Taxis had until now been exempt.

Since Stockholm introduced temprorary border controls in November, police in the south have been conducting spot checks on vehicles at the Oresund rail and road bridge, which connects Sweden to Denmark.

The measures have since been extended until February 8.

Swedish Radio reported that five taxis arriving from Denmark have been stopped at the Swedish border in recent days, with patrons believed to be refugees.

"We have seen an increase in taxis with customers that may lack proper documents for entry to Sweden," border police spokesman Leif Fransson said. "We have to adjust to changes in the flows."

Claudio Scubla, head of the Swedish taxi drivers' association, criticized the move, saying that ID checks are a task for police and other authorities.

The association, like its Danish counterpart, will however recommend members to be more restrictive, to avoid trafficking allegations.

Sweden has been one of the main destinations sought out by refugees entering the European Union. The country registered about 160,000 asylum bids last year - double that of 2014.