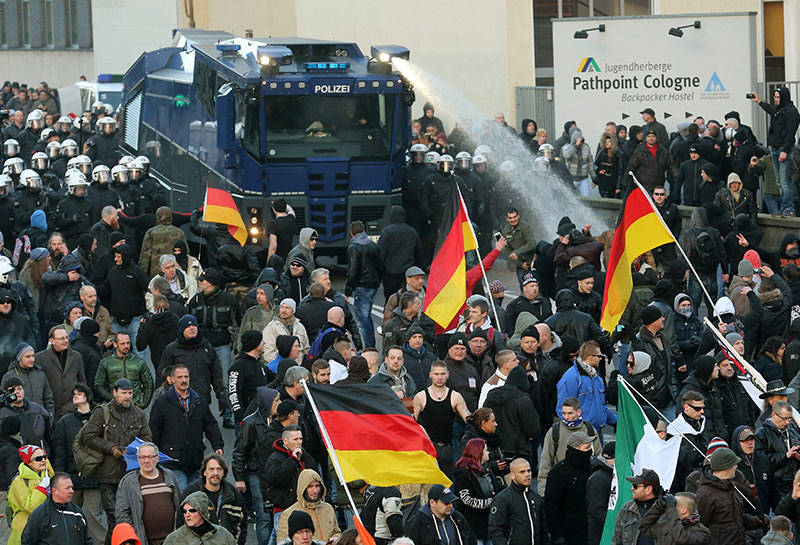 Despite warnings against refugee scapegoating in the aftermath of mass sexual assaults against women in Cologne, far-right protests briefly turned violent as protestors threw bottles at officers and chanted anti-refugee slogans

German Chancellor Angela Merkel on Saturday backed stricter laws to expel migrants convicted of crimes, as clashes erupted at far-right protests in Cologne over a rash of sexual assaults blamed on asylum seekers.

Cologne police said they have now recorded 379 cases of New Year's Eve violence, ranging from groping to theft to two reported rapes, with asylum seekers and illegal migrants making up the majority of suspects.

With anger growing at the scale of the attacks, supporters of the xenophobic Patriotic Europeans Against the Islamization of the West (PEGIDA) movement marched in protests that briefly turned violent in the western city. Police used tear gas and water cannon to clear the rally of far-right supporters after protesters threw firecrackers and bottles at officers they said had failed to prevent the New Year's attacks on women.

Vowing tough action, Merkel declared that any migrant handed a jail term, even a suspended sentence, should be kicked out of the country. "If the law does not suffice, then the law must be changed," she said, pledging action to protect not just German citizens, but innocent refugees, too.

Witnesses described terrifying scenes of hundreds of women running a gauntlet of groping hands, lewd insults and robberies in the mob violence. Of the cases reported so far, 40 percent related to sexual violence, Cologne police said in a statement. "Those in focus of criminal police investigations are mostly people from North African countries. The majority of them are asylum seekers and people who are in Germany illegally," police added, confirming witness accounts.

The allegations have stoked criticism of Merkel's liberal open-door policy, which brought 1.1 million new asylum seekers to Germany last year, and migrants still fear scapegoating. As questions grew over the country's ability to integrate the newcomers, it emerged late Saturday that a man who was killed trying to attack a police station in Paris on Thursday had lived in a migrant shelter in Germany. Revealing that they had raided the man's apartment, German police did not specify if he was an asylum seeker.

In Cologne, hundreds of PEGIDA supporters waved German flags and signs saying "Rapefugees not welcome," as they shouted: "Merkel raus" (Merkel out). The rattle of a helicopter circling in the sky and the occasional bang of a firecracker added to tensions as counter-protesters, separated from the PEGIDA crowd by police, chanted "Nazis raus."

Earlier, hundreds of women's rights activists gathered outside Cologne's landmark cathedral to rally against the New Year's Eve violence. "It's about making clear that we will not stop moving around freely here in Cologne, and to protest against victim bashing and the abuse of women," 50-year-old city resident Ina Wolf said.

The populist right-wing Alternative for Germany (AfD) party, which polls show as having 10 percent support ahead of state elections this year, claimed the violence gave a "taste of the looming collapse of culture and civilization."

Playing on popular fears about Europe's migrant influx, the mob violence threatens to cloud what had been a broadly welcoming mood in Germany where crowds cheered as Syrian refugees arrived by train in September. "Cologne has changed everything, people now are doubting," said Volker Bouffier, vice president of Merkel's Christian Democrat Union (CDU) party.

Details remain hazy of what happened in the frenzied crush on what was supposed to be a night of New Year's celebration. It was unclear how many of the suspects had been in Germany long term or belonged to a scene of drug dealers and pickpockets known to lurk around the railway station and how many were newly arrived asylum seekers.

On Friday, the Interior Ministry said Germany's federal police had identified 32 suspects, 22 of whom were asylum seekers, in connection with 76 offences, 12 of which had a sexual nature.

Merkel has so far refused to abandon her welcoming stance toward war refugees, but on Saturday had tough words for law breakers. "If a refugee flouts the rules, then there must be consequences, that means that they can lose their residence right here regardless of whether they have a suspended sentence or a prison sentence," she said after a meeting with the top ranks of her party in the southwestern city of Mainz. Under current laws, asylum seekers are only deported if they have been sentenced to jail terms of at least three years, and if their lives are not at risk in their countries of origin. However, she also reiterated her mantra on the refugee issue, insisting again: "We will manage it."

Recently, European countries have witnessed a shift toward far-right, anti-migrant parties, which have been gaining popularity amid rising public fears regarding the migrant influx. Polls showed a rise in support for right-wing parties in Austria, Poland and Switzerland. Similarly, anti-migrant and anti-Islam movements such as PEGIDA have been on the rise.
Last Update: Jan 10, 2016 4:13 pm
RELATED TOPICS