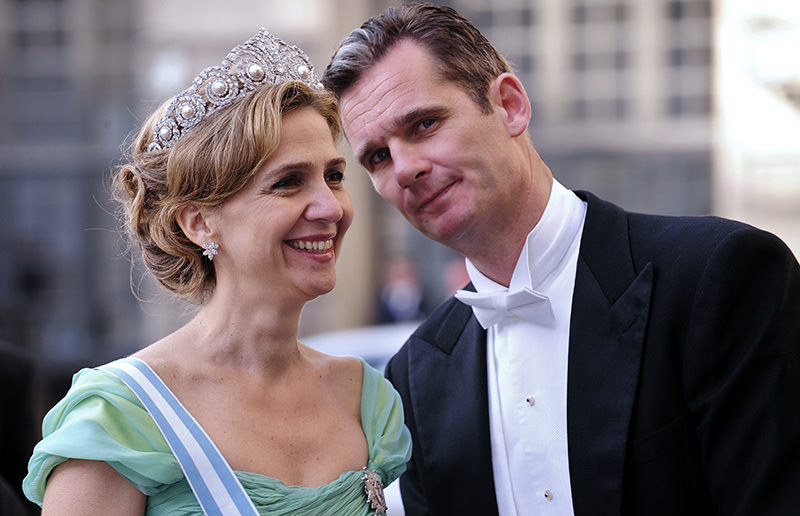 A file picture taken on June 19, 2010 shows Infanta Cristina of Spain (L) and her husband Inaki Urdangarin arriving at the wedding banquet of newly-wed Swedish royal couple (AFP Photo)
by Associated Press
Jan 10, 2016 12:00 am
Visits to the palm-dotted Mediterranean island of Mallorca for Spain's Princess Cristina used to mean luxurious stays at the seaside Marivent Palace but the sister of King Felipe VI won't get anywhere near the royal family's official summer residence in a trip this week.

Instead, the 50-year-old princess and her husband are set to face anti-monarchy protesters and hordes of media Monday as they enter a makeshift courtroom and she makes history in front of millions of Spanish TV viewers as the first royal family member to face criminal charges since the monarchy was restored in 1975.

Following the tax fraud trial expected to last six months, the princess could face up to eight years in prison if a three-member panel of judges agrees the couple abused a real estate consulting firm described in court papers as a "front company" to bankroll a lavish lifestyle including parties at their modernist Barcelona mansion, salsa dancing classes and vacations at expensive hotels.

Cristina and her husband, Olympic handball medalist turned businessman Inaki Urdangarin, will sit in the dock alongside 16 others in the case centering on allegations that Urdangarin used his Duke of Palma title to embezzle about 6 million euros ($6.5 million) in public contracts through the Noos Institute. It was the nonprofit foundation he set up with a business partner to broker seminars and sports events as a tourism lure.

The alleged scheming involved some events that never happened or were billed at unusually high rates at the height of Spain's economic boom before the onset of the financial crisis in 2008. Some money went to the Aizoon real estate company that paid for personal expenses for the couple a perk they should have declared as an income to tax authorities but allegedly didn't.

The suspects stand accused of being "greedy in a time when it wasn't seen as being that bad," said Ana Romero, the royalty reporter for the El Espanol digital publication. "There was a lot of money around, and it's a country where connections are very important."

There are so many defendants and lawyers plus reporters covering the case that judicial officials were forced to move the trial from a courthouse to a sprawling building complex on the outskirts of Palma de Mallorca normally used to hold mass training courses for public servants. The case is being heard in the regional capital of Spain's Balearic Islands because many of Urdangarin's deals were for the islands.

The princess and her husband are not expected to utter a word during the first few days of the trial as judges read out the 89 alleged crimes committed by the suspects, and lawyers including Cristina's make arguments aimed at having their clients removed from the case.

She denied knowledge of her husband's activities during a 2014 closed door court appearance and a prosecutor recommended she should be fined but a judge decided Cristina could be charged with tax fraud in 2007 and 2008 because Spanish law allows groups to file charges when state prosecutors don't. Her case was driven forward by the anti-corruption group Manos Limpias (Clean Hands).

"They're saying she knew about it," said Ignacio Sanchez, a Madrid-based lawyer for Hogan Lovells International LLP who specializes in white collar crime and fraud. "They are saying she cooperated with it, knew that her husband was doing it and allowed him to do it."

Details about the lavish life the couple enjoyed dribbled out in court paperwork released during the pre-trial investigation from 2011 to 2013, outraging Spaniards as the country teetered on the edge of financial chaos at the height of Europe's debt crisis. The case made for a steady stream of bad headlines for Cristina's father, former King Juan Carlos already smarting from a big backlash after he broke his hip during a 2012 elephant hunting trip seen as an extreme example of royal excess.

Juan Carlos ended up abdicating in 2014, not mentioning the scandals bearing down on his reign but saying Spain needed fresh royal blood. Cristina's brother Felipe has never mentioned his sister's troubles directly but pledged to restore public trust in Spain's monarchy.

Shortly after taking over, he invoked a palace reshuffle that stripped Cristina and her older sister Princess Elena of their roles as official members of the royal family though they have not given up their slots of succession in line for the throne.

And six months after Felipe became king, a prosecutor recommended charges for Urdangarin carrying a possible sentence of 19Â½ years in prison while saying Cristina should not be indicted but ordered to pay 580,000 euros ($711,000) to cover the amount she could have profited because of her husband's alleged illegal dealings.

But the judge disagreed, saying in court documents that many company expenses appeared personal in nature, honing in on household examples with bills for work or services at the mansion charged to Aizoon.

"As royal misdemeanors go, things don't get much worse than this," said Joe Little, managing editor of Britain's Majesty magazine.

Just as Felipe and his wife Queen Letizia are making their mark as Spain's new royal couple and "repairing damage to the monarchy, this thing is coming back and biting them. It's not guilt by association, but it's an unhelpful situation just when they have turned the corner," Little added.

Cristina's royal role of appearing in public was reduced as her legal troubles mounted during her father's reign, and it's been completely eliminated by her brother Felipe. She moved to Switzerland in 2013 and hasn't been seen for years at the summer palace in Mallorca, after being photographed there annually during Juan Carlos' reign in summer visits with her husband and their four children.

The princess was allowed to attend a royal-studded October funeral for a cousin of Juan Carlos, but her husband was nowhere in sight and she did not appear in any pictures with King Felipe or Letizia, who were present.

"There is nothing about them that helps Felipe, and what would help him most is for them not to exist," said Romero, also the author of the book "End Game" about the abdication of Juan Carlos. "You will never, ever see a picture of him as king with her again."

The trial is expected to create an unwelcome sideshow for Felipe as he and his wife try to boost their public image in official state trips this year to Britain, Japan and Saudi Arabia. Among witnesses expected to testify are former palace officials who will presumably be questioned on whether Juan Carlos knew and approved of his son-in-law's business dealings.

Cristina herself has a chance of avoiding the trial if the judges agree with her lawyers that a Spanish legal precedent should be applied to her case that allows tax fraud cases to be dropped when they are not initiated by prosecutors.

But the same tactic can't be used by her husband to avoid trial, meaning it's all but inevitable that details about the couple's everyday life behind the high walls of the mansion they were forced to sell during the investigation come out during the proceedings.

And that will make for a constant stream of high-profile news in Spain, which is in an economic recovery but still has sky-high unemployment of 21 percent.

"Felipe and Letizia are protected because they were not there and in power when this happened, but it will be a mirror on a very embarrassing time that people do not feel proud of," Romero said.
Last Update: Jan 10, 2016 2:54 pm