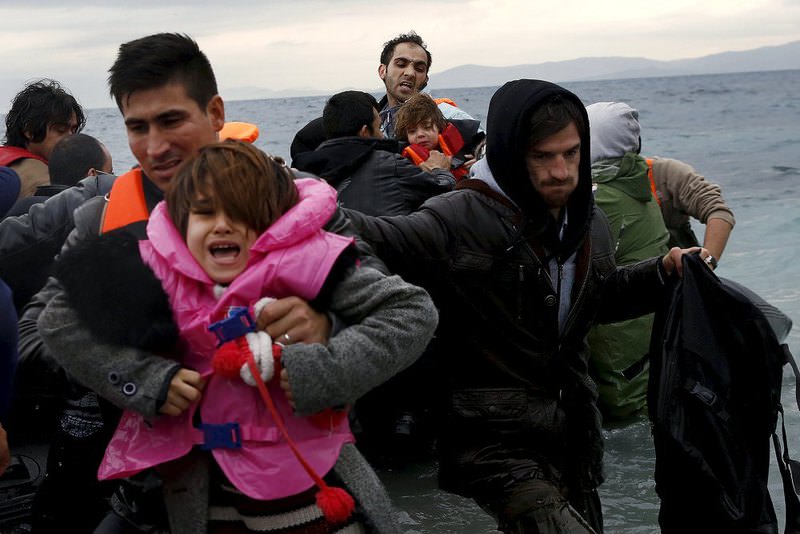 Refugees and migrants arrive on an inflattable raft at the Greek island of Lesbos.
by Daily Sabah with Wires Jan 16, 2016 12:00 am

European Commission President Juncker said the EU's reputation has been damaged by the failure to handle the refugee crisis, and warned the European economy would suffer should the Schengen zone collapse under the pressure of the migration crisis

European Commission President Jean-Claude Juncker said EU member states have "failed to deliver" on efforts to resolve the migrant crisis, including a deal to relocate thousands of asylum seekers from Italy and Greece. He added that the EU's reputation is being damaged worldwide by the failure of member countries to manage the refugee crisis. Juncker on Friday called on EU member states to take in more refugees arriving on Europe's shores, after more than 1 million migrants entered Europe in 2015. He said it is unacceptable "that certain member states say they are not going to accept refugees in their countries. That is not possible."

Juncker said Europe was considered world-wide as a wealthy, admirable continent, but that "now we do appear as being the weakest part, and the poorest part of the world." He said he was embarrassed explaining Europe's migrant problems to leaders of countries that have taken in more than 2 million refugees.

So far 272 refugees have been moved to other countries out of the 160,000 that European Union nations agreed to relocate, as the has continent faced a wave of people fleeing conflict in Syria, Afghanistan and North Africa. "It's not the commission that has not delivered," Juncker, the head of the executive branch of the 28-nation union and the driving force behind the plans, told a press conference. "But a number of member states have failed to fully deliver on what we need to do and what needs to be done," he added.

Juncker vowed to not abandon the relocation scheme, which was finally approved in October over the opposition of several Eastern European capitals, to move some asylum seekers from frontline countries Greece and Italy. He said he was "getting a little tired" that the commission was coming under fire for not doing enough to resolve the worst migrant crisis since World War II, when it has spent months drawing up joint relocation and other plans.

He excoriated member states for struggling to implement plans that they had themselves agreed to, warning that the EU was "moving toward a serious crisis in terms of credibility" if member states don't assume their legal and political responsibilities.

He alsosaid EU citizens would have a harder time finding jobs and the economy would suffer should Europe's internal passport-free zone collapse under the pressure of the migration crisis.

Juncker also conceded it would not be easy to curb the mass influx of migrants and refugees, a top priority for Germany – the 28-nation bloc's biggest economy and the main destination for those arriving. The migration crisis, Europe's worst since World War II, has exposed bitter disagreements between EU members and has put the Schengen zone of passport-free travel on the verge of collapse, a prospect Juncker fears.

"Less Schengen means less employment, less economic growth," he told a news conference in Brussels. "Schengen is one of the biggest achievements of the European integration process." "Without Schengen, without the free movement of workers, without freedom of European citizens to travel, the euro makes no sense. And the same applies to the link between Schengen, freedom of movement and the internal market. … If anybody wants to kill off Schengen, then ultimately what they are going to do is do away with the single market as well. And that's going to lead to unemployment issues in Europe."

Juncker said the brake-up of the Schengen zone would also make freight and business travel much more expensive as he urged member states to deliver on measures the bloc has already adopted to mitigate the crisis but largely failed to deliver on. EU members have traded accusations over who is to blame for the crisis, with Brussels and Germany accusing Italy and Greece of letting too many people in. The southern states lambasted Berlin for its open-door policy that encouraged more arrivals.

More than 1 million refugees arrived in the EU in 2015. Juncker said he would not give up seeking a European solution to prevent member states from resorting to national fixes, like reintroducing border controls within the Schengen zone. But he admitted that would continue to be an uphill battle. "I don't have too many illusions about the year ahead because everything is going to be difficult. But I'm not going to give up, I reject the idea that this is somehow the beginning of an end," he said.

The majority of migrants arriving in Europe come from the Middle East and Africa. The turmoil in the Middle East and the five-year war in Syria have led many people to flee conflicts in an attempt to seek security and shelter in more prosperous and peaceful countries such as those in Europe. However, Europe has been criticized for lacking a collaborative and effective response to the crisis.

Europe's human rights and democracy body said on Friday it was "deeply concerned" at proposed changes to Danish immigration laws that make it harder for migrants to stay in Denmark.

The proposals include using migrants' valuables to pay for their stay, delaying family members joining migrants for three years, allowing detention in some cases and adding "integration potential" as a condition for accepting asylum claims. Parliament is expected to vote on Jan. 26 on the proposals, which the United Nations has also criticised.

In a letter to Immigration Minister Inger Stojberg, Council of Europe Commissioner for Human Rights, Nils Muiznieks, said, "I have repeatedly stressed that asylum seekers and immigrants should not be considered as criminals," he wrote, in reference to proposals to detain migrants in "special circumstances".

Referring to the plan to use migrants' assets to pay for their stay in Denmark, he wrote, "I believe that such a measure could amount to an infringement of the human dignity of the persons concerned." On Thursday, Swiss broadcaster SRF reported that migrants arriving in Switzerland are obliged to give authorities any assets worth over 1,000 Swiss francs ($995). It showed a photograph of a receipt one refugee received for his cash.
Last Update: Jan 16, 2016 6:42 pm
RELATED TOPICS