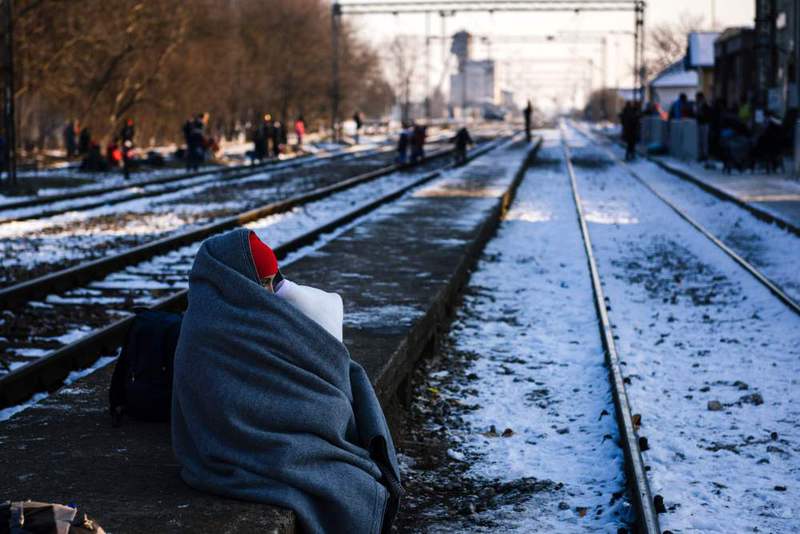 A woman hugs her baby as she sits on a platform and waits with other migrants for a train in the southern Serbian town of Presevo.
by Daily Sabah with Wires
Jan 22, 2016 12:00 am

Austria has decided to cap the number of new migrants while Macedonia and Serbia have implemented new restrictions on migrants. Recent decisions have prompted reactions from politicians across Europe and highlight the deepening rift among EU countries

The ranks of EU countries closing their doors to migrants grew on Wednesday, with hotspot Austria announcing it would "drastically" cap the number of asylum-seekers accepted this year.

Chancellor Werner Faymann called the move a "wake-up call for the EU," which he accused of failing to protect the bloc's external borders, which forced individual members to take matters into their own hands.

Non-EU member Macedonia said it had temporarily closed its border with Greece to migrants on Wednesday, blocking the path of hundreds trying to reach northern Europe. It reopened its border with Greece yesterday morning to migrants, but only those seeking refuge in Austria and Germany were allowed to pass, police said, refusing those who would seek asylum in Macedonia.

The announcements reflect an ever-deepening rift between EU countries opting to tackle the continent's worst migrant crisis since 1945 on a national level, and those calling for a joint European solution.

Sweden, Denmark, Germany and Austria have imposed entry restrictions for migrants to reduce the influx. Serbia and Croatia followed suit on Wednesday, saying they would only allow migrants to pass through their respective countries if the refugees were seeking asylum in Austria or Germany.

European Council President Donald Tusk issued a stark warning on Tuesday that the European Union had "no more than two months" to tackle the migration crisis engulfing the 28-nation bloc, or else face the collapse of its passport-free Schengen zone.

Human rights groups have expressed fears that the restrictions' knock-on effect risked leaving migrants – including many children – stranded in icy temperatures along the western Balkans route.

German and Turkish police on Wednesday separately announced major coordinated raids against a criminal trafficking network, which used unseaworthy ships to send more than 1,700 refugees to Europe. The joint operation was a major strike against international organized crime fueling the record migrant wave to Europe, police chiefs from both countries told a press conference at Potsdam outside Berlin.

Governments are worried that the onset of spring, and with it warmer temperatures, will herald a fresh spike in arrivals in the coming months. "We are running out of time. We need a sharp reduction in the coming six to eight weeks," warned Dutch Prime Minister Mark Rutte, whose country holds the bloc's rotating presidency.

In 2015, more than one million refugees and migrants made the perilous journey by sea to Europe, according to the United Nations. Half of the new arrivals were Syrians fleeing civil war. Many also came from Iraq and Afghanistan. But the crisis shows no signs of abating, with latest figures revealing that Greece has already seen 21 times more migrants arrive on its shores so far this month, than in January 2015.

Grasping for solutions, the European Commission is set to unveil a major overhaul of its refugee system, known as the "Dublin Regulation," in March. Current rules require a migrant's claim to be processed in the EU country in which they first arrive. But the EU's executive body intends to replace the regulation with a permanent quota system, which would require each bloc member to accept a set number of refugees based on population size and other factors.

Several countries, including Hungary and Poland, remain fervently opposed to such a quota system. Austria, which last year received one of the highest asylum claims per capita in the bloc, said Wednesday it could not cope with another huge influx. It said it had decided to accept only 37,500 asylum claims in 2016 – less than half of the 90,000 applications received last year. "We can't take in all asylum-seekers in Austria," warned Faymann, whose small nation of 8.1 million people has become a key transit country for migrants.

The sentiment was echoed by German President Joachim Gauck, who said it was "morally and politically necessary" to limit Europe's refugee influx, and avoid ceding ground to populists and extremists.

German Chancellor Angela Merkel has been facing increasingly strong criticism even from within her own camp over her open-door policy. Spurned by Austria's announcement, the Bavarian sister party of Merkel's Christian Democrats (CDU) on Wednesday reiterated calls for a cap on migrant numbers. "The Austrians do. So we have to do it too," said the party's secretary general Andreas Scheuer.

Leading children's charities this week warned that young refugees crossing through the Balkans were at serious risk from the bitterly freezing weather, and lacking adequate shelter from the snowy conditions. A five-year-old girl and a woman died of cold on Wednesday as they tried to reach Greece by sea, as the flow of migrants heading for Europe resumed, following a lull due to high winds.

More than one million refugees and migrants came to the European Union in 2015, half of them Syrians fleeing civil war in an attempt to seek security and shelter in a more prosperous and peaceful country, such as those in Europe. However, Europe has been slammed for lacking a collaborative response to the crisis. Compared to Syria's neighboring countries, the U.N. refugee agency encouraged European countries to do more to share the burden of the international community in the migrant crisis. Turkey is the country hosting the most refugees in the world with more than two million refugees in the country. Jordan hosts more than 630,000 Syrian refugees while Lebanon hosts more than one million.