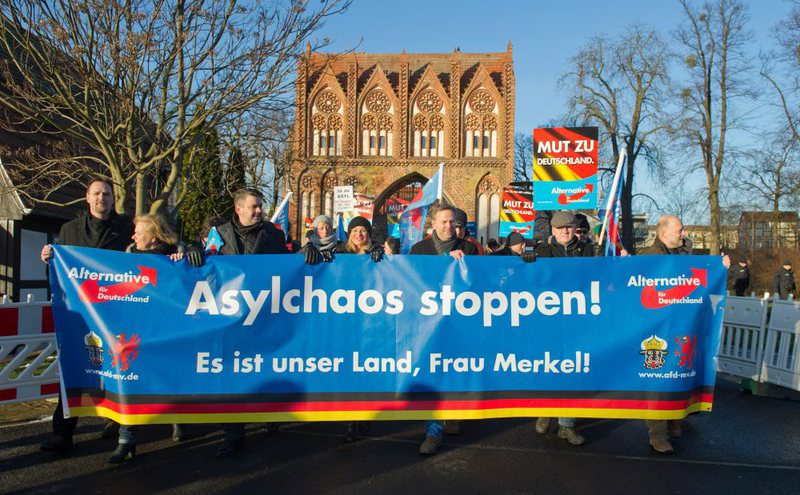 by Daily Sabah with Wires
Jan 26, 2016 12:00 am
Immigration-critical Alternative for Germany (AfD) has become the third-strongest party in the country following the parties in Chancellor Angela Merkel's ruling coalition, according to market research company TNS Emnid.

AfD had the backing of 10 percent of potential German voters, up 1 percent from last week, making it the third-strongest party in the country, according to the weekly Sonntagstrend survey, which is conducted for German newspaper Bild am Sonntag.

The Christian Democratic Union (CDU) along with Bavarian sister party Christian Social Union (CSU), which generally operate as a single entity in the federal government, fell two percentage points to 36 percent, while the Social Democratic Party (SPD) gained one percentage point to 25 percent.

Merkel has stuck to an open immigration policy, even as other European countries have built fences to keep migrants out and set limits to the number of incoming refugees.

The AfD, which emerged in 2013 out of opposition to the euro currency, has placed much of its focus on the migration debate as it campaigns for tougher restrictions on entering the country. Support for the AfD has been grown since its inception, despite attempts by established parties to keep the newcomers from joining the political debate.

Support among potential voters for the environmental Greens party fell 1 percent to 9 percent. The far-left Die Linke and liberal Free Democratic Party (FDP) remained stable at 9 percent and five percent, respectively. The AfD is almost entirely supported by men, according to the Emnid survey. Only 2 percent of women support AfD, while 17 percent of men do, Bild am Sonntag said. For the Sonntagstrend survey, Emnid interviewed 1,875 people between Jan. 14 and Jan. 20.

The influx of refugees into Europe has led to calls from across the political spectrum for a change in Germany's and the European Union's handling of the number of refugees escaping war and poverty in Syria, Afghanistan and elsewhere. Growing concern about Germany's ability to cope with the influx and worries about crime and security after assaults on women on New Year's Eve in Cologne are weighing on support for the CDU and the CSU.

Merkel, despite appearing increasingly isolated over her open-door policy on refugees, has resisted pressure from some conservatives to cap the influx or to close Germany's borders. Instead, she has tried to convince other European countries to take in quotas of refugees and pushed for reception centers to be built on Europe's external borders.