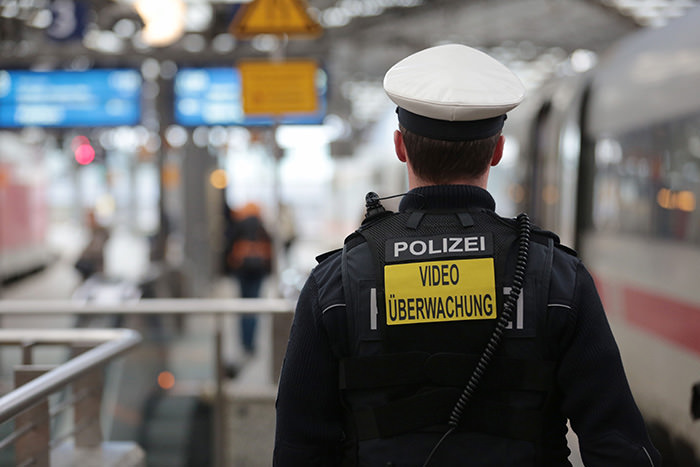 An officer of the German federal police patrols the main railway station equipped with a body video camera in Cologne, Germany, 01 February 2016 (EPA Photo)
by Feb 01, 2016 12:00 am
"Everyone should be able to party in Cologne without danger," Mayor Henriette Reker said, as police presented their safety concept ahead of the five-day celebrations, which start on Thursday.

On the first day, 2,500 police officers are to patrol the streets in a bid to prevent a repeat of New Year's Eve, when women reported being encircled, sexually harassed and robbed by gangs of drunken men. Among the hundreds of complaints made to police were at least three allegations of rape.

The city is mobilizing its entire police force and investing about 475,000 euros (517,000 dollars) into personnel and resources. An estimated 830 members of the fire and rescue service are to provide extra support to law enforcement.

The Cologne Carnival Festival Committee has said it will deploy 200 helpers with walkie-talkies to oversee the parade on Rose Monday.

Additional lighting masts will be erected at 30 points throughout the city to keep watch over the millions of revellers, many of who travel from abroad to take part in the celebrations.

But Mathies said the police could not guarantee 100-per-cent safety. An average of 50 cases of sex assaults have been reported each year at the festival, in which many people dress in costumes and parties run late into the night.

For the first time this year, a so-called "women's security point" will offer support and assistance, stationed amid celebrations near the city cathedral.