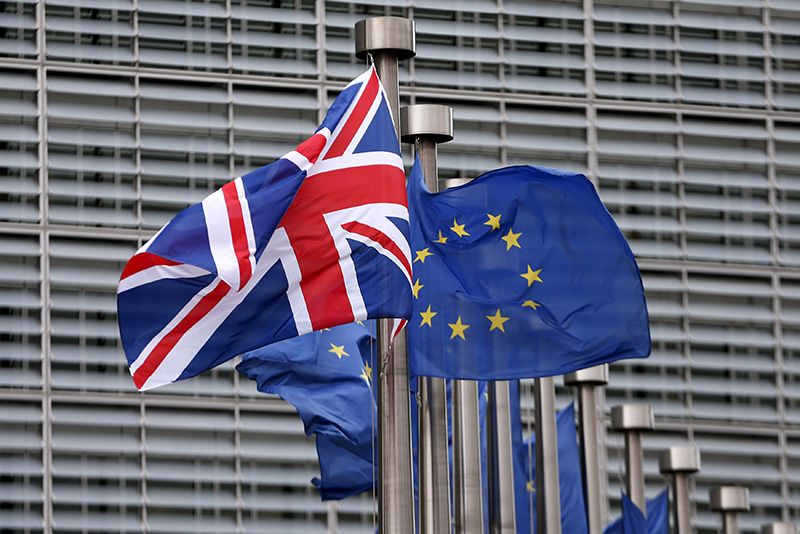 Union Jack flag flutters next to EU flags ahead of a visit from Britain's Prime Minister David Cameron at EU Commission headquarters in Brussels (Reuters)
by Feb 02, 2016 12:00 am
EU president Donald Tusk on Tuesday unveiled key proposals to keep Britain in the bloc, including a four-year brake on benefit payments for migrant workers and protection for counties that do not use the euro currency.

Tusk sent the proposals for a "new settlement" to European capitals, firing the starting gun for two weeks of frantic negotiations with the other 27 European Union leaders to secure a deal at a summit on February 18-19.

British Prime Minister David Cameron, who wants a deal so he can hold a referendum in June on his country's membership of the EU, said Tusk's proposal "shows real progress" but added that "more work" was needed.

"To be, or not to be together, that is the question... My proposal for a new settlement for #UKinEU," Tusk tweeted, adapting a famous quote from English playwright William Shakespeare's "Hamlet".

The proposals will not take effect until Britain avoids a so-called "Brexit" and votes to stay in the EU in the referendum, the draft adds.

European Commission spokesman Margaritis Schinas said the proposals took into account all issues that Cameron raised in a letter to Brussels last year, and also took into account the concerns of other EU states.

The proposals include an "emergency brake" to stop EU migrants claiming benefits -- such as income top-ups for low-paid workers -- for up to four years after their arrival if a country can prove that its welfare system and public services are being overwhelmed.

It says they would have to prove that an "exceptional situation exists on a scale that affects essential aspects of its social security system" to get the limit approved by the European Commission.

It would then have to be voted for by a qualified majority of EU states.

But the question of how long Britain could apply this for is left blank in the draft circulated to EU leaders, where the issue will be one of the most contentious points.

The plan has angered the so-called Visegrad Four -- the central European states of Poland, the Czech Republic, Hungary and Slovakia -- which have thousands of citizens working in Britain.

They say it breaches the EU's principles of free movement and is discriminatory.

Cameron will hold talks in Poland on Friday with Polish leaders aiming to win them over to the changes. He is also set to hold talks with German Chancellor Angela Merkel in Hamburg on February 12.

Despite concerns from France, Tusk's plan also includes a "mechanism" by which the nine countries that are not in the euro can raise concerns and be given "necessary reassurances" about decisions by the eurozone.

But he stressed that the mechanism "cannot constitute a veto nor delay urgent decisions" -- adding that the conditions for triggering the mechanism had to be discussed before the summit.

The proposals further include a "red card" system that would allow a group of 55 percent of the EU's national parliaments to stop or change draft EU laws.

The current "yellow card" system -- using a term taken from football disciplinary infractions -- only allows parliaments to demand an explanation of laws from Brussels.

British eurosceptics were unconvinced, with UKIP head Nigel Farage dismissing it as "frankly ludicrous" and no change on the current situation.

Britain will be further exempted from the EU's stated goal of "ever closer union" because of its "special status" in the bloc's treaties -- including its staying out of the euro and the passport-free Schengen area.

Although Cameron has set a deadline of end-2017 to hold the referendum and insists he is in "no hurry" for a deal, sources have said he is keen to push a vote through by June.

That would avoid any new flare-up in Europe's migration crisis this summer and before British eurosceptics, particularly in Cameron's own Conservative Party, become even more unruly.

Opinion polls are largely split on whether Britons would vote to leave the EU.

It will be the British public's first vote on the country's EU membership since 1975, two years after it joined what was then the European Economic Community.
Last Update: Feb 02, 2016 2:43 pm
RELATED TOPICS