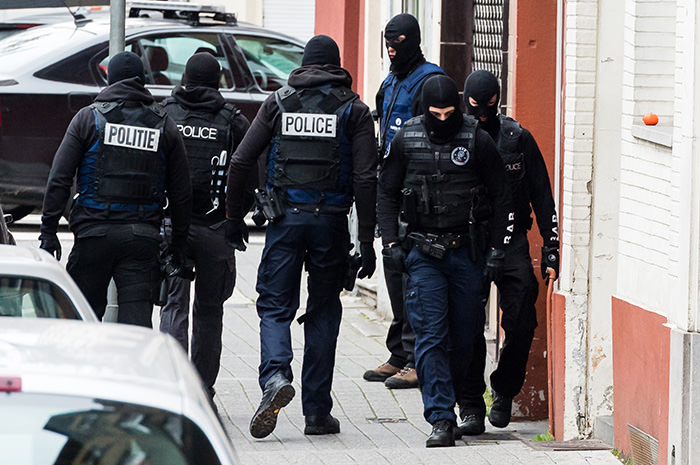 In this Monday, Nov. 16, 2015 file photo, armed police guard a street in Brussels (AP Photo)
by Associated Press Feb 17, 2016 12:00 am
Belgian authorities say that searches in the wake of last year's deadly attacks in Paris have uncovered video linked to a person working in Belgium's nuclear industry.

The federal prosecutor's office said in a statement on Wednesday that an "investigation is actively ongoing."

Belgian media reported that several hours of video was filmed near the home of a man thought to be a senior official at the Mol nuclear waste facility in the Flanders region. The house of the unidentified man was apparently filmed from a nearby wood.

Prosecutors declined to confirm that information or provide details.

Security services have long feared that extremists might get their hands on radioactive material.

It comes as a cloud hangs over some Belgium's nuclear plants after a number of unplanned shutdowns.

The November 13 attacks in Paris and Saint Denis targeted a music club, bars, restaurants and a football stadium, killing 130 people. They were carried out by three groups of Daesh terrorists.
Last Update: Feb 17, 2016 5:00 pm
RELATED TOPICS