Thousands of migrants stranded in Greece after new border controls 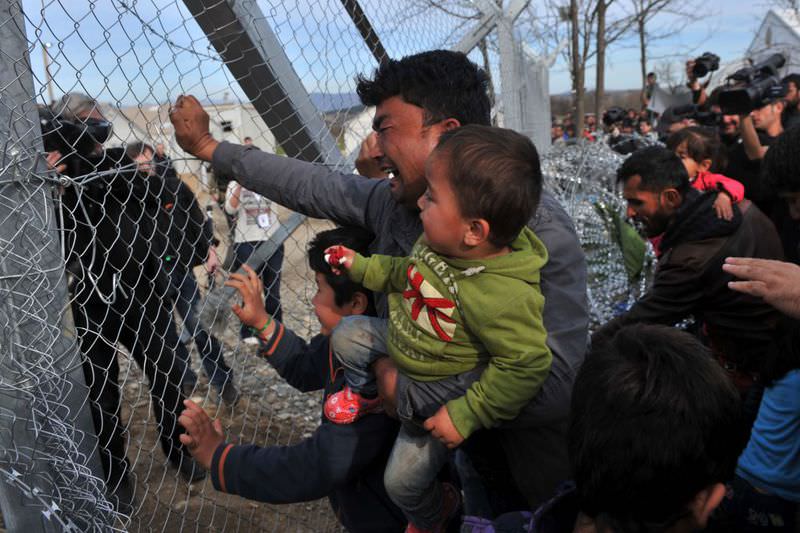 Thousands of migrants have been stranded in Greece as more border controls have been introduced in Europe, Meanwhile, Amnesty International slammed Austria for capping the number of asylum requests it accepts per day

Thousands of migrants were left stranded in Greece on Monday after Macedonia abruptly closed its border to Afghans, creating a fresh bottleneck as European countries scrambled to respond to the continent's refugee crisis.

About 8,000 people were trapped on Greece's northern frontier and at the port of Piraeus after Macedonia introduced the measure on Sunday, following decisions by countries further up the migrant route to turn back groups of Afghans. On Monday afternoon, Macedonia suspended all migrant crossings as tensions rose at the border, where hundreds of Afghans staged a sit-down protest in an area of no-man's land and occupied the railway line connecting the two countries.

Desperate to get through, they held signs that read: "We can't go back" and "Why racism?" while dozens of Afghan children also carried signs with the words: "Help us cross border."

A statement from Macedonia's police said they were restricting Afghans "because Serbia, Croatia and Slovenia decided to reduce their number". More than 600 Afghan refugees have been sent back to Macedonia in recent days, the statement said.

Greek police removed a crowd of stranded migrants blocking a railroad on the border with Macedonia, an official said. Around 900 people had been blocking the track since Monday, protesting Macedonia's migration policy to allow only Syrian and Iraqi refugees through.

Since November, countries on the Balkan route have allowed only Syrians, Iraqis and Afghans to continue their journey up towards Germany, Sweden and other European nations where they plan to apply for asylum. Macedonia's decision to stop letting Afghans through came just two days after Austria controversially introduced a daily limit on asylum applications. "We cannot go back. We will either die here or go on," said 20-year-old Afghan Mohamed Asif on the Greek side of the border. In Croatia, a police spokeswoman said they were still allowing some Afghans entry but that "most migrants who do not meet the criteria to continue their journey" were from Afghanistan - including some who had been sent back from Slovenia to Croatia.

Greek Junior Interior Minister for Migration Yiannis Mouzalas said Athens was racing to negotiate an end the deadlock, telling Vima radio that Athens was trying to exert pressure at the "European and bilateral level." The arrival last year of more than 1 million refugees and migrants on Europe's shores, many fleeing war, poverty and persecution, has caused a chain reaction of border clampdowns, in a blow to the EU's border-free Schengen zone. As the main gateway into the bloc, Greece has been struggling to cope with the inflow and fears new restrictions by other members will leave tens of thousands stranded on its territory.