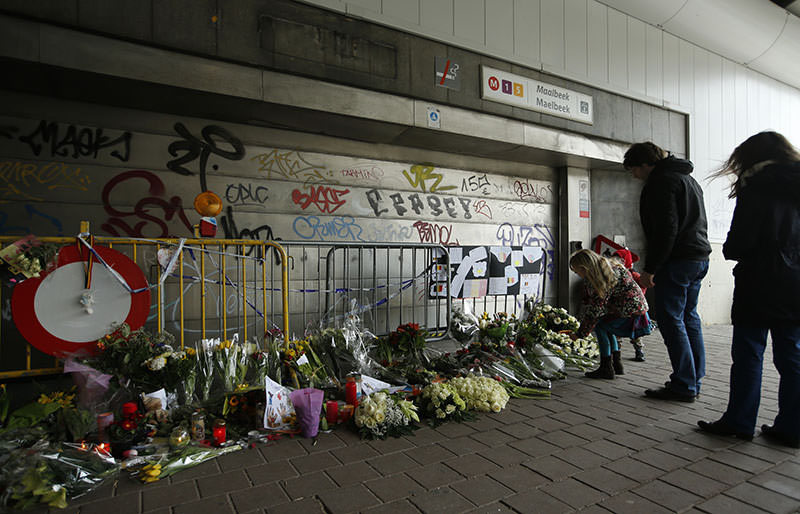 People stop, look at floral tributes placed outside the Maelbeek metro station, the scene of one of the bomb attacks on the Belgian capital, in Brussels, March 26, 2016 (AP)
by Compiled from Wire Services Mar 26, 2016 12:00 am

The organizers of a "March Against Fear" planned for Sunday to mark the Brussels terror attacks said they had cancelled the event after the authorities asked them to do so because of security fears.

"We understand this request. The security of our citizens is an absolute priority. We join the authorities in proposing a delay and ask people not to come this Sunday," the organizers said in a statement on Saturday.

Meanwhile, Brussels airport said it will not resume passenger flights before Tuesday, following a judicial investigation into the terrorist attacks at the airport.

Brussels Airport Company said Saturday it is working on a temporary solution to partially resume flights amid new security measures imposed by the Belgian government.

The airport has granted access to a team of engineers to assess damage to the terminal building where two bombs were detonated on Tuesday.

Greek police said they had found plans for a potential attack on Brussels airport in two Athens flats back in January 2015 and informed the Belgian authorities, Skai news broadcaster reported Saturday, citing the police.

Among other documents, a map of Brussels airport was found. Greek police have not yet issued an official statement on the report.

Germany said it is not ruling out the possibility of terrorist strikes on Germany following the Brussels attacks.

"We shouldn't count on the fact that international terrorism will continue to avoid Germany," German Justice Minister Heiko Maas said in a newspaper report Saturday.

Germany has been a potential target for an attack for a long time, Maas told the Saarbruecker Zeitung.

The minister called on Germans not to panic. "If we now become frozen stiff with fear and horror, then the terrorists have achieved their goal," he said.