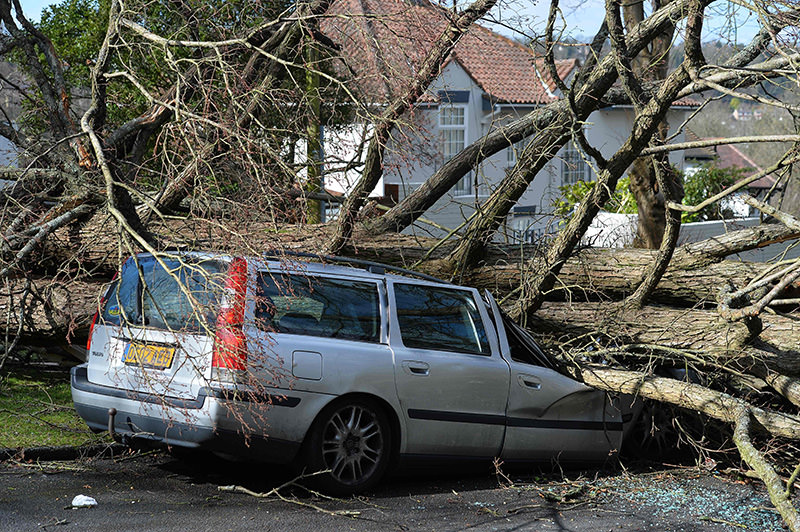 Winds gusting to hurricane force caused havoc in parts of western Europe Monday leaving tens of thousands of homes without power, forcing flight cancellations and the closure of roads and bridges.

In France, at least 60,000 homes were without power at one point, more than half of them in the western provinces of Brittany and Normandy, which later dropped to around 15,000 outages by the late afternoon, electricity grid operator ERDF said.

The strongest gusts were recorded on the Breton tourist island of Belle-Ile, where the wind reached 150 kilometres per hour (93 miles per hour).

In Britain, the same weather system -- dubbed "Storm Katie" -- left a trail of disruption in its wake as it swept across southern England overnight, leaving debris and roadwork barriers strewn across London's streets.

Police in Surrey were searching for a missing person after his kayak capsized in the river Wey.

Winds gusting to 170 kph (105 mph) forced the cancellation of around 150 flights in and out of Britain and cut power in more than 100,000 homes, with around 60,000 still without electricity by late afternoon, local utilities reported.

Heathrow, one of the world's busiest airports, reported around 130 cancellations with other flights delayed or diverted to other airports on the busy Easter holiday weekend.

Around 20 flights in and out of London's Gatwick Airport were cancelled and another four diverted.

Some airline passengers took to Twitter to describe their experience, with Michele Grant tweeting that she was grateful to have landed at Stansted airport after "terrifying and fruitless attempts to land at Gatwick".

A bridge crossing the River Thames in southeast England and the Severn Bridge which connects England and Wales were also closed, according to Highways England.

"It is particularly southern parts of England bearing the brunt of Storm Katie but also into parts of East Anglia as well, with these potentially damaging and disruptive gusts of wind of 60 to 70 mph -- but possibly more in the most exposed areas," said BBC weather forecaster Nick Miller.

In the Netherlands, winds gusting to 113 kph threatened to rip the roof off a complex of 28 apartments which had to be evacuated, public television NOS reported.

Easter holiday events were cancelled due to the bad weather, and fallen trees damaged cars and forced a brief closing of an autoroute.

High winds in Belgium also knocked down trees and led environment officials to close public parks in Brussels, which they said should reopen Tuesday after inspection and cleaning up the debris.