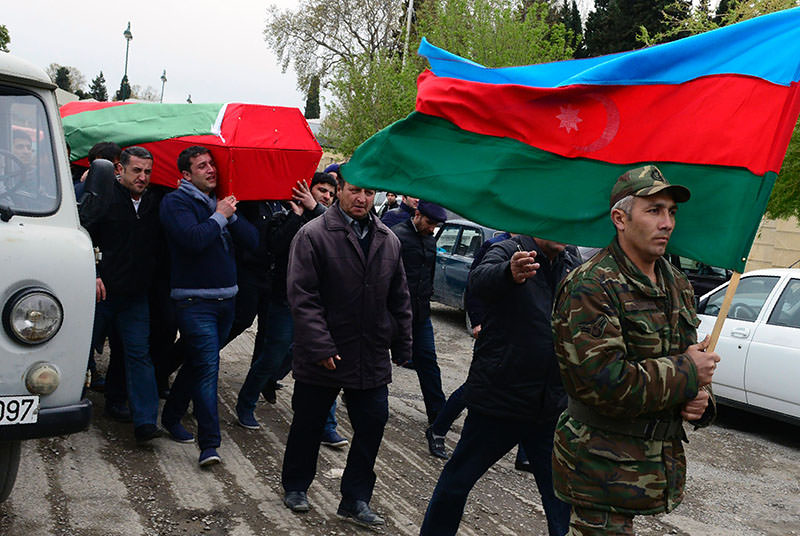 Men carry coffin of Azerbaijan's serviceman, who was killed on April 2 during clashes between Armenian, Azeri forces in Armenian-seized Azerbaijani region of Karabakh (AFP)
by Daily Sabah with Agencies Apr 03, 2016 12:00 am

A statement released by the Ministry of Defense said that upon calls from international organizations and as a sign of Azerbaijan's peaceful policy, all counter attack and retaliation operations were unilaterally halted and efforts began to fortify new positions and defenses of its territories. "If the Armenian armed forces do not stop provocative actions and continue shelling the residential areas and combat positions, the Azerbaijani armed forces will continue offensive operations to destroy the Armenian forces to liberate the occupied lands," said the statement.

"The offensive operations will continue to ensure Azerbaijan's territorial integrity by using all available military equipment."

A separate statement released Saturday said that Armenian forces have broken the ceasefire 130 times on Sunday through mortar, rocket-propelled grenades and large-caliber machine guns, and Azerbaijani forces fired back 137 times in response.

Meanwhile on Sunday, Iran announced that three mortar rounds fired from conflict zones landed on its soil. According to a statement released by the governorate of East Azerbaijan province which borders Armenia and Azerbaijan, the rounds landed in a village located in Khoda Afarin county, without causing casualties or injuries. One high voltage transmission line pylon was knocked down, causing blackouts in the area. Border officials of two countries were summoned and official warnings were given, the statement said.

Azerbaijan is ready to declare a cease-fire if Armenia first does the same, President Recep Tayyip Erdoğan said Sunday after speaking on the telephone with his Azerbaijani counterpart Ilham Aliyev. His remarks came at Istanbul Atatürk Airport after returning from the Nuclear Security Summit in Washington, D.C., which Aliyev also attended.

"When I heard about the issue, I called my brother Ilham Aliyev. He was on way to the airport to return to Azerbaijan. We extended our condolences and at that time, the clashes were continuing. However, I just learned that Azerbaijan is ready to declare a cease-fire if Armenia first declares a cease-fire," Erdoğan told reporters. He also praised an Azerbaijani woman reporter who cried when she asked him his response to the news of 12 Azerbaijani soldiers killed in occupied Karabakh, calling the encounter a unique example for all journalists.

On Saturday, the OSCE's Minsk Group expressed their concerns over the latest border hostilities between Azerbaijan and Armenia. "The co-chairs call upon the sides to stop shooting and take all necessary measures to stabilize the situation on the ground. They reiterate that there is no alternative to a peaceful negotiated solution of the conflict and that war is not an option," said an OSCE statement.

Dozens of soldiers and at least two civilians were killed in renewed fighting began on Friday. "Twelve Azeri servicemen were killed in action and a Mi-24 helicopter was shot down by Armenian forces," Azerbaijan's defense ministry said in a statement on Saturday, also claiming that Azeri forces took control of "two strategic heights and a village" in Karabakh. One Azeri tank also went out of service due to land mine explosion. The statement added that six Armenian tanks, 15 artillery positions and supporting engineer positions were destroyed, and thus it is estimated that more than 100 Armenian soldiers were either killed or wounded in action.

Nagorno-Karabakh and its surrounding territories in the west and south, which is roughly one-fifths of Azerbaijan's territory, have been under occupation of Armenian forces and local militia from Karabakh since a six-year long war over the control of the region ended in 1994, similar to how pro-Russian militia have illegally occupied parts of Ukraine (the Donbass region) since 2014.

Azerbaijan's Defense Ministry said that its army had launched the operations in the Agdere, Terter, Agdam, Hocavend and Fuzuli regions to protect civilian lives.

Three UN Security Council Resolutions (853, 874 and 884) and United Nations General Assembly Resolutions 19/13 and 57/298 refer to Karabakh as being part of Azerbaijan. However, none of them are legally binding.

The Parliamentary Assembly of the Council of Europe (PACE) refers to the territory (Resolution 1416) as being occupied by Armenian forces.