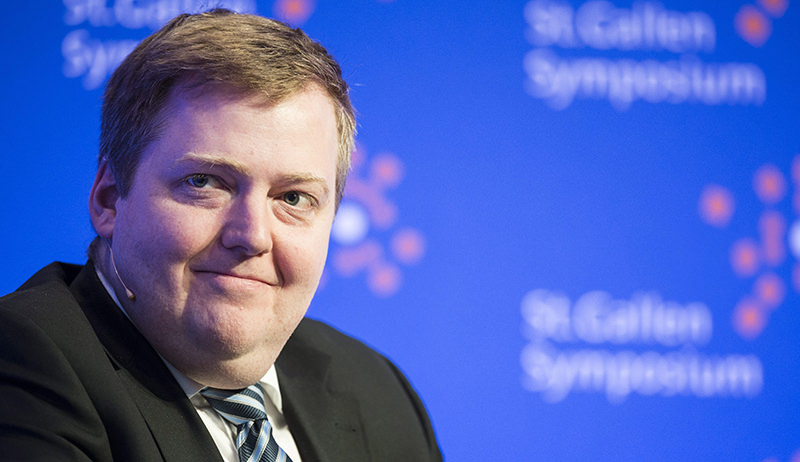 A file picture dated 07 May 2015 of Iceland's Prime Minister Sigmundur David Gunnlaugsson at the first day of the St. Gallen Symposium, in St. Gallen, Switzerland (EPA Photo)
by Compiled from Wire Services Apr 04, 2016 12:00 am
The political future of Iceland's prime minister is in danger because of his reported links to an offshore account in the British Virgin Islands.

Sigmundur David Gunnlaugsson faces a vote of no confidence in parliament Monday after news reports linked him and his wife to an account that was created with the help of a Panamanian law firm at the center of a massive tax evasion leak.

The revelation concerns offshore company Wintris Inc., which Gunnlaugsson allegedly set up in 2007 along with his wife Anna Sigurlaug Palsdottir.

Gunnlaugsson secretly owned millions of dollars of bank bonds during his country's financial crisis when the country's financial system collapsed and banks had to be bailed out. The irritated premier denied wrongdoing in a television interview, which he cut short, but faces calls to resign and a no-confidence vote in parliament this week.

The opposition has called for a vote against the center-right government.

Gunnlaugsson, the head of the center-right Progressive Party, began his four-year term in 2013, five years after Iceland's financial collapse.

One of the biggest document leaks in history snared world leaders, celebrities and sports stars in a snowballing worldwide scandal Monday over their secretive offshore financial dealings.

A year-long worldwide media investigation into a trove of 11.5 million documents, leaked from a Panama-based law firm with offices in 35 countries, exposed a tangle of confidential financial dealings by the elite, from aides of Russian President Vladimir Putin to relatives of Chinese President Xi Jinping, sports celebrities and screen stars.