Leaders warn of return to nationalism unless EU protects borders 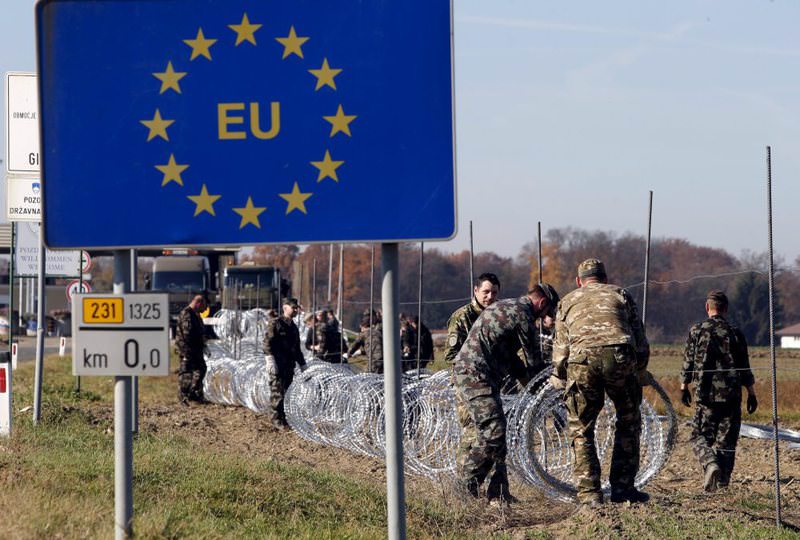 German Chancellor Merkel has warned of the risk of a 'return to nationalism' in Europe and European Council President Tusk said the idea of an EU state was an illusion, as the continent battles its worst migration crisis since World War II

The presidents of Europe's three main institutions on Thursday painted a bleak picture of the European Union, saying the 28-nation bloc lacked leadership and was descending into petty, nationalistic politics.

"We have a lot of salesmen in the European Council and only a few statesmen," said Martin Schulz, the president of European Parliament, bemoaning the current crop of EU government chiefs who are struggling to overcome a string of crises.

Schulz joined European Commission President Jean-Claude Juncker and European Council President Donald Tusk for a debate on the future of the EU in the room where the Treaty of Rome was signed in 1957, which laid the foundations of today's European Union. "The idea of one EU state, one vision ... was an illusion," said Tusk, a former Polish prime minister who is now tasked with finding consensus and cohesion among EU leaders.

Such unity has become an almost impossible mission at a time when hundreds of thousands of migrants are fleeing to Europe in search of a better life, sending a shockwave through the staid continent.

Britain, the EU's second-biggest economy, is due to hold a referendum in June on whether to withdrawal from the bloc. Years of economic underperformance, particularly in the continent's southern rim, have also frayed the fabric of European solidarity.

Without giving names, Tusk also said that the newcomers were often the most opposed to finding a common policy on the migration crisis, "sometimes in a very irritating fashion." Italy and Greece are the main ports of entry for the migrants but say they should then be sent on to other European countries to share the burden. However, Poland, the Czech Republic, Slovakia and Hungary have rejected European Commission plans to introduce mandatory quotas of refugees and have accused Brussels of trying to blackmail them.

Juncker, a former prime minister for Luxembourg who has been at the heart of EU policymaking for three decades, reminisced about the time when Europe moved toward economic union and created the single euro currency.

"In former times we were working together ... we were in charge of a big piece of history. This has totally gone," he said, complaining that EU citizens did not understand what the European Union was trying to do. "This is fertile ground for the populists." Tusk, Juncker and Schulz were in Rome for the presentation of the Charlemagne Prize to Pope Francis on Friday. The prize is awarded to people who are seen to have furthered the cause of European unification.

An urgent goal for Brussels, Tusk said, must be to "convince our citizens that we are able to provide this feeling of security and stability" by "re-establishing effective control of our external borders." That strategy, Tusk contended, can "stop the radicals in their march for power."

Nationalists and anti-European sentiment have gained ground in elections in several EU nations. Fears of being overwhelmed by migrants are testing a major EU accomplishment – the Schengen zone's border-free travel – as several countries erect or plan physical barriers.

As Italian Prime Minister Matteo Renzi kicked off two days of talks in Rome with Merkel and senior EU officials, the German leader said Europe must defend its borders "from the Mediterranean to the North Pole" or suffer the political consequences.

Support for far-right and anti-immigrant parties is on the rise in several countries on the continent, which saw more than a million people arrive on its shores last year. In Austria, Norbert Hofer of the far-right Freedom Party is expected to win a presidential run-off on May 22 after romping to victory in the first round on an anti-immigration platform.

Merkel told a press conference with Renzi that Europe's cherished freedom of movement is at threat, with ramped-up border controls in response to the crisis raising questions over whether the passport-free Schengen zone can survive.

In previous years, many migrants landing in Italy have headed on to other countries, but with Austria planning to reinstate border controls at the Brenner pass in the Alps, a key transport corridor, Rome fears it could be stuck hosting masses of new arrivals. Renzi lashed out at Austria on Thursday, describing Vienna's position as "anachronistic." "This is the wrong attitude even if there is a migrant crisis," he said.

Renzi also hosted Juncker, Tusk and Schulz at a debate about the state of Europe on Thursday.

Merkel, whose country took in more than a million asylum-seekers last year, on Thursday insisted on the need to "respect the human dignity" of immigrants and to "share the burden" of the influx. Bulgarian Prime Minister Boyko Borisov, in an interview with Agence France-Presse (AFP), took a stance unusual among Central and Eastern European leaders in agreeing with her.

In Austria, far-right presidential candidate Hofer was meanwhile attempting to woo more mainstream voters by saying he believed it was possible to integrate migrants. "I think that if we do everything we can to make sure the people who are already in Austria integrate themselves, it's still possible," he told the Austria Press Agency (APA).

Europe has been witnessing a shift toward right-wing parties, which have been gaining popularity over fear of a refugee influx. Recently, polls noted a rise in support for right-wing parties in Austria, Denmark, Germany, Poland, the Netherlands, France and Switzerland.
Last Update: May 07, 2016 1:24 pm
RELATED TOPICS