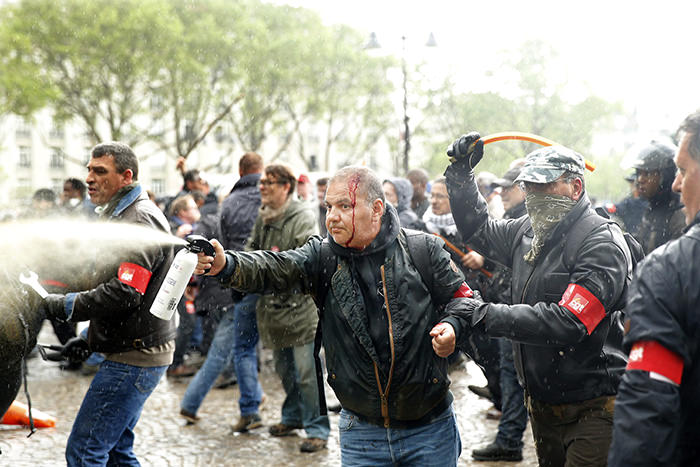 French President Francois Hollande on Thursday faced a wave of labor strikes and festering street protests even as his government survived a vote of no-confidence over plans to deregulate the labor market without a parliamentary vote.

Thousands of demonstrators took to the streets in cities across France on Thursday, including Nantes where protesters ransacked the main train station. In Paris, police used teargas to disperse hooded and masked stone-throwers at the tail-end of an afternoon street march.

The no-confidence motion tabled by opposition conservatives fell 42 votes short of the 288 required for a majority, handing the government a widely expected reprieve.

It came after the government this week said it would deny the National Assembly a vote on proposals to make it simpler to lay off staff in hard times and allow employers to apply in-house rules on pay and conditions, instead of national ones.

With the government emerging unscathed from the no-confidence vote, the bill now passes to the upper house of parliament where the opposition Les Republicains party has a majority, setting the stage for the legislation to be sent back and forth.

Raising the stakes for Hollande, who is pondering whether to run for re-election next year, the powerful CGT union announced fresh strikes from next week, and truck drivers are poised to do the same.

Philippe Martinez, head of the CGT, said it was time to "move up a gear", declaring Thursday's protest a warm-up ahead of demonstrations and walkouts next week.

"It's just the beginning," he said.

The CGT said it was calling for rolling strikes of more than two days each week. The official reason for the strike call is a standoff with management over conditions, but the timetable dovetails with the broader protests against government policy.

Prime Minister Manuel Valls said there was no question of withdrawing the labor reforms, which the government says are key to driving down an unemployment rate stuck stubbornly above 10 percent.

A rebellion over the bill highlighted the deep rifts within the ruling party. Opponents said the government's recourse to pushing the bill through by decree demonstrated its impotence.

"You no longer have power, you only have the appearance of power," said Christian Jacob, head of the conservative bloc in the lower house. "Francois Hollande's record of achievement is damning. France lags on all indicators. It is the poor performing student of Europe."

Valls fired back: "I'm looking, but I don't see on these benches anyone else with a majority."

Rebel Socialist lawmakers who oppose making it easier to hire and fire workers failed on Wednesday to gather enough votes from among the party and left-wing allies to table their own no-confidence motion against the government. On Thursday they refused to vote across the party divide in support of the opposition.