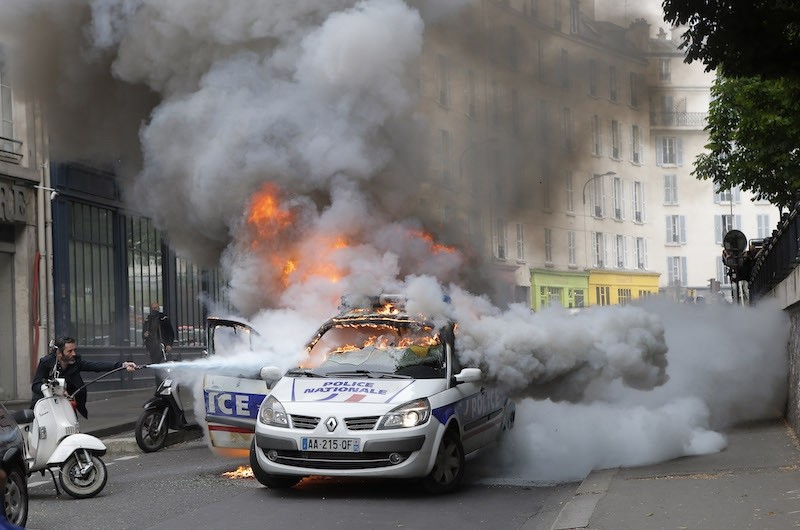 Four suspects accused of setting ablaze a police car with two officers inside during recent anti-government demonstrations in Paris will be charged with attempted murder, the Paris Prosecutor's Office said late Saturday. The incident, which was caught on camera and widely shared on social media, occurred on Wednesday on the sidelines of a rare demonstration by French police against "anti-cop hatred."

The footage shows a small group of masked protesters hammering the police vehicle with iron bars, smashing its windows, before hurling in an explosive device that quickly fills the car with smoke and engulfs it in flames. The policeman and policewoman inside were able to escape unharmed.

According to the office, four suspects aged between18 and 32 were remanded in custody Saturday night. They are also accused of carrying out an armed attack against public officers, destroying public property and of participating in an armed group. "Investigations are continuing to determine their exact roles in the incident and whether any other possible suspects should be arrested," the prosecutor's office in Paris said after the charges were read by an investigating judge. Prime Minister Manuel Valls earlier this week strongly condemned the police car attack, saying the punishment "must be harsh."

Violence has marred a number of protests across France in recent weeks – often against controversial labor reforms proposed by the deeply unpopular government of President Francois Hollande. Much of the unrest has been blamed on small groups of troublemakers who appear bent on targeting the security services. Over the past two months, some 350 members of the security forces have been injured and dozens of protestors were detained during protests against the proposed labor reforms, which were forced through the lower house of parliament last week without a vote.

Last week, Valls threatened to use force to break up protests that interfered with the operation of ports, refineries and airports; however, strikes continued to disrupt dozens of flights and trains. The labor reform, which would make it easier for employers to hire and fire workers, is likely the last major piece of legislation to be put forward by Hollande's government. Hollande, whose poll ratings are among the lowest of any post-war French president, has said he will decide by the end of the year whether to run for re-election next May.