France dragged into chaos by labor reforms as protests escalate, Euro 2016 under threat 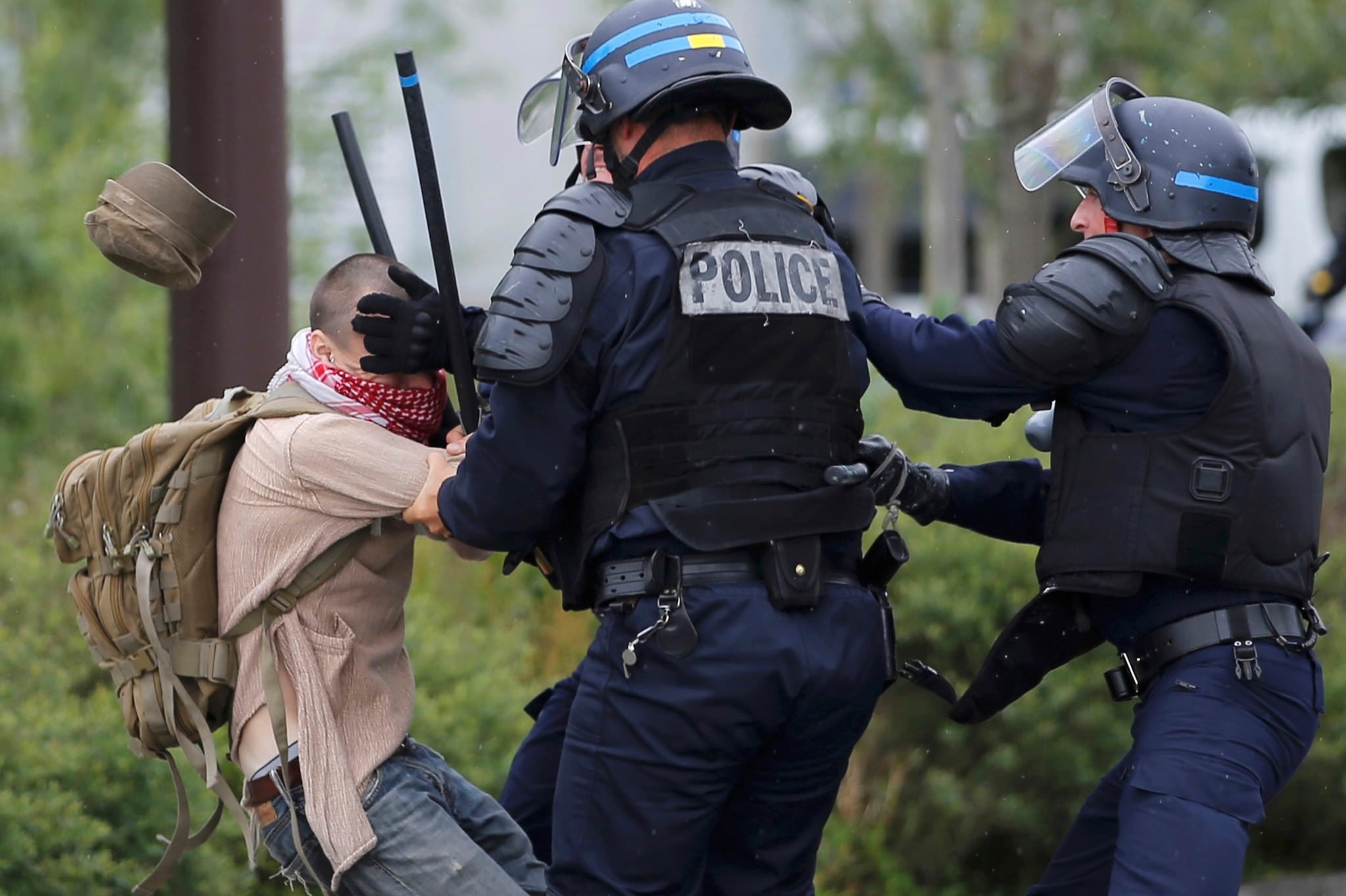 French police apprehend a man during a demonstration to protest the government's proposed labour law reforms in Nantes, France, May 26, 2016. (Reuters Photo)
by Daily Sabah with AP May 26, 2016 12:00 am

Volley after volley of tear gas poisoned Paris air on Thursday, as French authorities struggled against nationwide strikes and a groundswell of public anger at a high-stakes government attempt to change the way France views work. With the country being dragged into chaos, protests against President François Hollande's socialist government escalates day by day, putting the upcoming Euro 2016 football championship under severe threat. After France announced its plan to extend the state of emergency to maintain security throughout Euro 2016, the UEFA said games could be moved to different venues in France, played without fans or even rescheduled.

With the lingering anarchy throughout the country, the government took serious steps: oil refineries were shut, nuclear plants were put on hold. Yet the protests continued to escalate; dock workers hurled firecrackers, union activists cranked up the tensions to try and force President Hollande to abandon a labor bill that gives employers more flexibility and weakens the power of unions.

The big question is whether Thursday's burst of labor action fizzles out after the one-day strikes end, or inspires lasting unrest.

Prime Minister Manuel Valls opened the door to possible changes in the labor bill that's triggering all the anger — but said the government wouldn't abandon it. Union activists said it's too late to compromise. Posters at a protest in the port of Le Havre bore a blood red tombstone representing the bill reading: "Not amendable, not negotiable: Withdraw the El Khomri Law" — referring to Labor Minister Myriam El Khomri.

The draft law, aimed at boosting hiring after a decade of nearly 10-percent unemployment and slow but corrosive economic decline, relaxes rules around the 35-hour work week and leaves workers less protected from layoffs.

"There could be improvements and modifications" in the bill, Valls said on BFM television Thursday. He didn't elaborate on what might be changed, and insisted that the "heart" of the bill — Article 2, which weakens the power of unions over workplace rules — should remain.

Withdrawing the bill "is not possible," he said.

Protesters took to the streets in several cities — and in Paris, met with waves of tear gas as police fought bands of violent masked marchers. Police detained 77 people as tens of thousands marched from the Bastille plaza through eastern Paris.

Members of the firmly leftist CGT union, leading the protests, remain angry that the government forced the bill through the lower house of parliament without a vote because of division in the Socialist majority.

"Valls is hardening his tone? Well we're hardening our tone, too!" an organizer shouted into a loudspeaker at the Normandy Bridge, in northern France, where some 200 to 300 trade unionists and other protesters gathered to block traffic.

Union activists then made their way into the port city of Le Havre, waving red flags, a percussion band leading the way. At least 10,000 dock workers and others poured into an esplanade in front of Le Havre city hall, setting off smoke bombs and threatening bystanders. They tossed powerful fireworks into the fountains, sending plumes of water rising into the air as the square reverberated with explosions.

Fabien Gloaguen, an activist with the militant Worker's Force movement, said the government would have to back down.

Valls insisted the bill is "good for workers" and small businesses, and argued that many of its critics are ill-informed of its contents.

In addition to loosening rules about the 35-hour work week, the bill makes it easier to fire workers in times of economic downturn, and weakens the power of unions to set working conditions across an entire sector.

The stakes are high for both Hollande and the unions. The president is hopeful of getting re-elected next year, despite being deeply unpopular, and needs to show he has the strength to push through reforms. The unions are fighting for relevance, having lost membership in recent years.

"We're at an interesting juncture. If the movement finishes once more in failure, it might make further mobilization more complicated," said Stephane Sirot, a historian of the French union movement at the University of Cergy-Pontoise.

He said it's been decades since a left-wing government has been confronted with a nationwide strike of this magnitude.

Two months of protests escalated over the past week as unions targeted the sensitive oil industry, blocking fuel depots and refineries.

The government has started using its strategic fuel reserves and forcing depots to reopen, but supplies remained spotty Thursday, with long lines and caps on purchases.

Drivers endured long waits to reach gas pumps, railing at the strikes, the government and the overall funk in France. Prices have risen noticeably at gas pumps and some stations are rationing.

But at the blocked Normandy Bridge, at least one pair of travelers said they didn't mind.

"It's for us that they're doing this," said Jean-Luc Geraert, whose battered white van was caught behind the makeshift barricade. Geraert, a 55-year-old industrial painter, said if the government doesn't back down soon, "it's going to get worse."