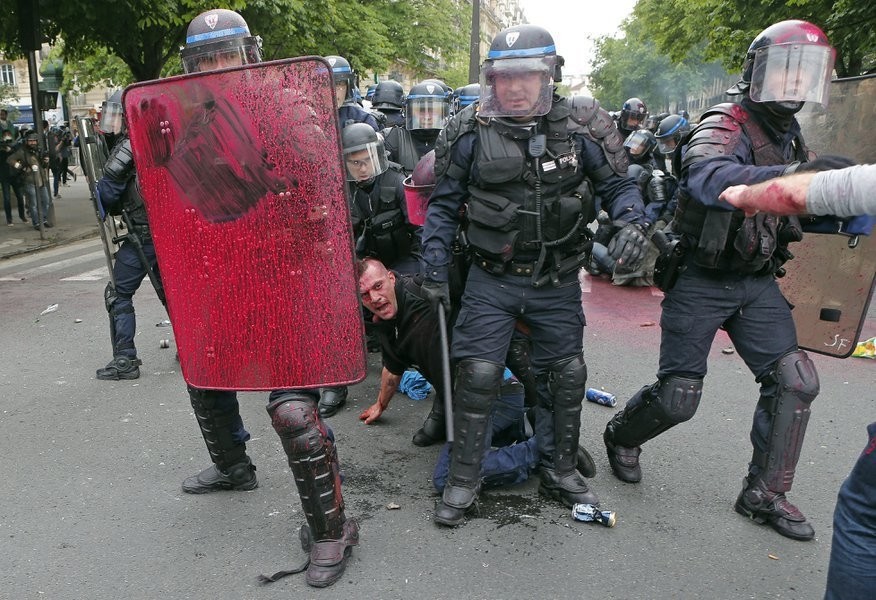 Several videos from protests in the French capital show police brutality. The French government has remained defiant with only two weeks left for the Euro 2016 championships, which has already been heightened by security concerns

Amid a fresh wave of protests over a bitterly disputed labor law, many videos showing police and security forces apparently using disproportionate force on labor protesters have attracted viewers and controversy, including a police officer aggressively shoving a woman and throwing her to the ground.

The incident, which took place on Thursday in Toulouse, shows a policeman pushing a young woman from her shoulder and grabbing her by the neck before she falls to the ground. A bystander helped her stand up while the officer was uninterested in the woman's situation.

French authorities ordered the removal of some of the videos showing police using violence on protesters, saying they posed a threat to security forces. French media has also been criticized on social media for not airing videos showing security forces using disproportionate force and for paying little attention to the issue. The video was only one of the many disturbing scenes that have been unfolding cross the country as thousands of people protest a controversial labor law proposal.

The escalating unrest, which has gathered pace over the last week and sparked petrol shortages that forced the government to dip into strategic fuel reserves, comes just weeks before football fans flood into the country for the Euro 2016 championships, which has been heightened by security concerns amid waves of protests and fear of terror attacks.

The reforms would give employers greater freedom to cut pay and lay off workers. They would also weaken unions' power to negotiate with firms on issues such as working hours, which in France average 35 hours a week. Unions say the changes proposed in the law favor companies at the expense of workers' rights and are demanding that the new labor law be scrapped. Despite the protests, the government has remained defiant, with riot police on Friday moving in to clear blockades outside petrol depots, and French President Francois Hollande vowing not to give in to union demands.

Hollande's tough line was echoed Saturday by French Prime Minister Manuel Valls ahead of talks with bosses in the oil and transport sectors, the two sectors worst hit by the protests. "My responsibility as head of government is to ensure that people can buy petrol and that businesses won't be penalized by the blockages," he said, pledging to defend the law "to the end."

Saturday's talks were aimed at taking stock of the gasoline shortages following the partial or total closure of six of the country's eight refineries. Several of the sites have been operating at reduced capacity due to the ongoing union action. Hoteliers and restaurateurs have reported "major cancellations" in Paris and in the west over the strikes and petrol shortages.

With most of the depot blockades cleared by police on Friday, the situation was much improved although the government said around 20 percent of petrol stations were still suffering shortages. Transport Minister Alain Vidalies cautioned Saturday, however, that it was too early to say the petrol crisis had been resolved. Francis Duseux, head of the Ufip oil industry federation, saw progress and said, "Over the past two days, the situation has considerably improved." Nonetheless, further protests are expected next week with strikes expected to hit the rail network, the Paris Metro and civil aviation on Tuesday. With petrol in short supply, many disgruntled motorists were forced to wait in long queues at service stations.

After a day of major protests on Thursday, which authorities said brought 153,000 people on to the streets – organizers put the figure at 300,000 – the eight unions opposing to the law urged demonstrators to "step up the mobilization."

Earlier this week, France's civil aviation body appealed to airlines to fuel up abroad before arriving in Paris from European destinations to ensure they could make the return flight, in a move that Air France insisted was merely precautionary. Tourist bookings were also hit, with hoteliers nervous that Euro 2016 visitors may be put off by the industrial action.

The CGT union that has led the protests has called for rolling strikes on the Paris Metro network to start on June 10, the day Euro 2016 begins, giving the organizers new headaches on top of security concerns sparked by last November's extremist attacks in Paris.

The strikes come a year ahead of an election in which Hollande is considering standing again despite poll ratings that are among the lowest for a French leader in modern history.