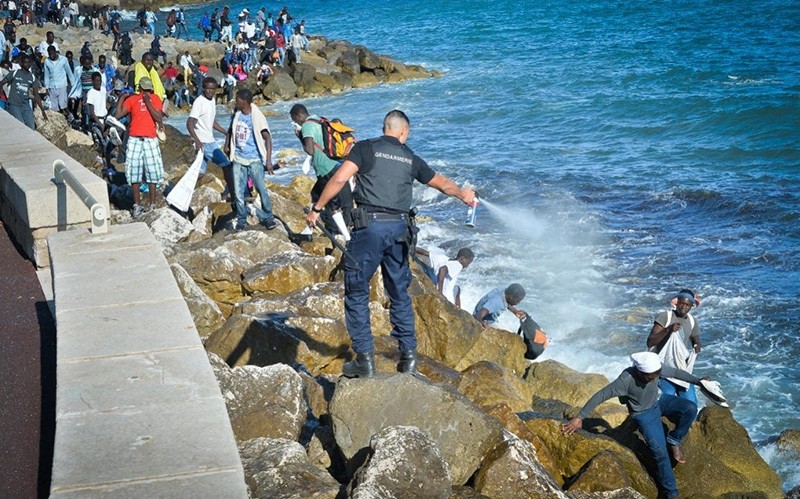 Migrants attempting to reach France from Italy were stopped by French police, who confronted the migrants with pepper spray.

More than 100 migrants broke through police barriers at the Italian border town of Ventimiglia and made their way into France last Friday, the local Italian police chief said.

They stopped on rocks near the port at the French Riviera town of Menton after breaking through in the afternoon and were still there in the evening under the surveillance of French police, said Ventimiglia police commander Giorgio Marenco.

"Both the Italian and French forces at the border were taken by surprise," Marenco told Reuters. The French Interior Ministry and representatives of the Alpes-Maritimes region around Menton were not available for comment.

A video posted on the website of Nice Matin newspaper showed a stream of people picking their way across rocks, followed by police in riot gear. A few started to walk into the sea.

It was not immediately clear how they got past police cordons.

Many of the hundreds of migrants who arrive by boat in Italy every day aim for northern Europe. Ventimiglia's craggy seashore became the site of a temporary migrant camp last year, which was later cleared away by police.

Most of the more than 94,000 people who have arrived in Italy by boat this year travelled from sub-Saharan Africa to Libya where people smugglers, who have taken advantage of the breakdown of order there, charged them hundreds of dollars for the passage, often in unseaworthy boats.

The city of about 24,000 residents opened a reception center to house the hundreds of migrants who had been sleeping rough under a bridge.

About 150 migrants left the center shortly after midnight on Thursday and walked to the shore, where they remained for hours before heading for France.

"The migrants who have reached Ventimiglia over the past three years have one aim: to pass into France," Marenco said.
Last Update: Aug 10, 2016 8:39 pm
RELATED TOPICS