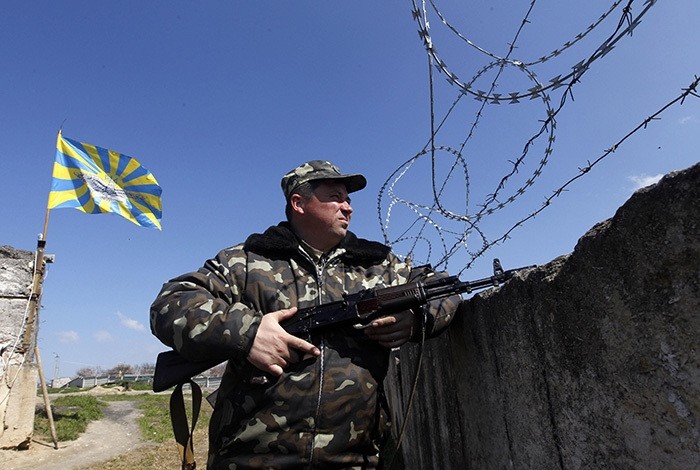 A Ukrainian serviceman stands guard at a Ukrainian military base in the Crimean town of Belbek March 21, 2014. (Reuters Photo)
by Compiled from Wire Services Aug 11, 2016 12:00 am

Ukrainian President Petro Poroshenko says he has ordered the army to be put on combat alert on the de-facto border with Crimea and the line of contact in eastern Ukraine.

The Russian intelligence agency FSB says its officer and an army soldier were killed over the weekend in two separate incidents while fending off what Moscow described as a series of attacks by Ukrainian "saboteurs."

The UN Security Council was to discuss the growing tensions later Thursday at the request of Ukraine, a non-permanent council member.

Ukraine's pro-Western President Petro Poroshenko met his top brass and ordered forces along the frontier with Crimea and across the conflict-wracked east onto "high-alert level".

Russian President Vladimir Putin also held a meeting with security chiefs to discuss "additional measures for ensuring security for citizens and essential infrastructure in Crimea," the Kremlin said in a statement.

"Scenarios were carefully considered for anti-terrorist security measures at the land border, in the waters and in the airspace of Crimea," it said.

Fighting in eastern Ukraine between government troops and Russian-backed separatists has claimed more than 9,500 lives since it began in 2014. But there have not been any reports of disturbances on Ukraine's de-facto border with Crimea.

The United Nations on July 14 said Ukraine's forces had indiscriminately shelled residents while pro-Russian insurgents and Kiev battalions had summarily killed civilians in what may have constituted "war crimes".

The United Nations High Commissioner for Human Rights (OHCHR) study painted a bloody picture of inhumane treatment of captives and non-combatants as well as the engagement of multiple-rocket systems never intended for use in urban areas.

It particularly pointed the finger of blame at rebel groups within the self-proclaimed "people's republics" of Lugansk and Donetsk -- a separatist region in Ukraine's eastern rustbelt that Kiev says is backed up by Russia.

The 26-month revolt against the pro-Western government in Kiev has killed nearly 9,500 people and plunged Moscow's ties with the West to a post-Cold war low that has complicated the resolution of other urgent matters such as the Syrian war.