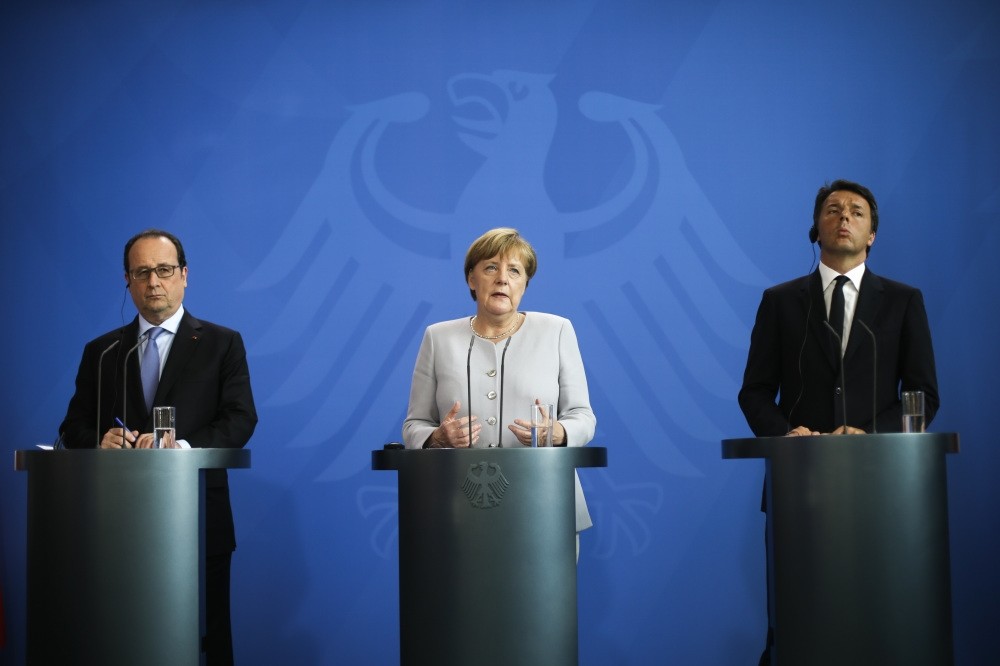 France's President Franu00e7ois Hollande, (L), German Chancellor Angela Merkel, (C) and the Prime Minister of Italy Matteo Renzi, (R), brief the media during a meeting at the chancellery in Berlin on June 27.
by Compiled from Wire Services Aug 23, 2016 12:00 am

Meeting with German and French leaders, Italian Prime Minister Renzi called for a reboot in the European Union after threats to the union emerged with extremist attacks, refugee crisis and the Brexit vote

The European Union needs a reboot in the wake of Britain's vote to leave, Italy's prime minister said Monday as he prepared to meet his French and German counterparts to discuss the fallout from Brexit.

Matteo Renzi said Europe needed to overcome the Brexit vote and a recent wave of militant attacks, and rediscover its role.

Europe's economic outlook, extremist attacks, the refugee crisis and the Syrian conflict were all on the agenda for the talks that were set to start later Monday on the island of Ventotene, one of the cradles of the European dream.

The big three are hoping to forge a common position ahead of an informal EU summit in Bratislava that will attempt to plot a way forward for the 27 remaining member states. Renzi admitted Brexit had left the bloc facing tough challenges. "Confronted with problems, one has a choice: find someone to blame or find a solution," he wrote. "We are working to solve the problems. And that means we want a post-Brexit Europe, that has been hit in the heart by terrorism, to relaunch an ideal based on unity and peace, freedom and dreams, dialogue and identity."

It will be the second round of talks between the three leaders. At their first, shortly after Britain's June 23 vote, the leaders called for "a new impulse" for the EU.

Critics have demanded less talk and more action over a crisis some states fear could lead to similar referendums in other countries, particularly the Netherlands, which opposes changes to the EU to achieve closer integration.

Coming up with a road map acceptable to all will not be easy, with the Czech Republic, Hungary, Poland and Slovakia vowing after Britain's vote to draw up their own plans for a less centralized EU.

Renzi was to welcome Hollande and Merkel in Naples before travelling to Ventotene, where they were expected to visit the grave of Altiero Spinelli, one of the founding fathers of the ideal of European integration. Imprisoned on the island by the fascist government during World War II, Spinelli and fellow captive Ernesto Rossi co-wrote the "Ventotene manifesto" calling for a federation of European states.

In another symbolic move, the leaders were set to hold a working dinner and press conference on Italy's Garibaldi aircraft carrier, the flagship of the EU's "Sophia" mission against people trafficking in the Mediterranean.

The EU plans to offer incentives to African governments to help slow the flow of migrants who have poured into Europe over the past three years, but disagreements on how to handle the situation have laid bare divisions between member states.

Italy, the main entry point for Africans but rarely their planned destination, is struggling to house migrants turned back from neighboring countries including France, and has disagreed with Germany over how to finance the response.

After a series of deadly attacks by DAESH, the three leaders are also expected to explore greater co-operation on counter-terrorism and an integrated European security and defense policy - a long-cherished objective that

could be easier to achieve now skeptical Britain has departed.

In terms of the economy, Hollande wants an EU investment fund for infrastructure, education, research and innovation to be doubled, according to a French diplomatic source.

Renzi is tipped to unveil a proposal to use part of those funds to restore European cultural monuments. But while Hollande and Renzi want to tackle Europe's identity crisis through investments, Merkel is unlikely to be moved by their anti-austerity overtures.

All three leaders have been hit in the polls by varying toxic combinations of refugee crisis, economic slump and terror attacks, with Eurosceptic or populist parties gaining ground.

And with 2017 bringing a general election in Germany and presidential election in France, they will be wary of ignoring opposition to further European integration at home, leaving them little room for maneuver.
RELATED TOPICS