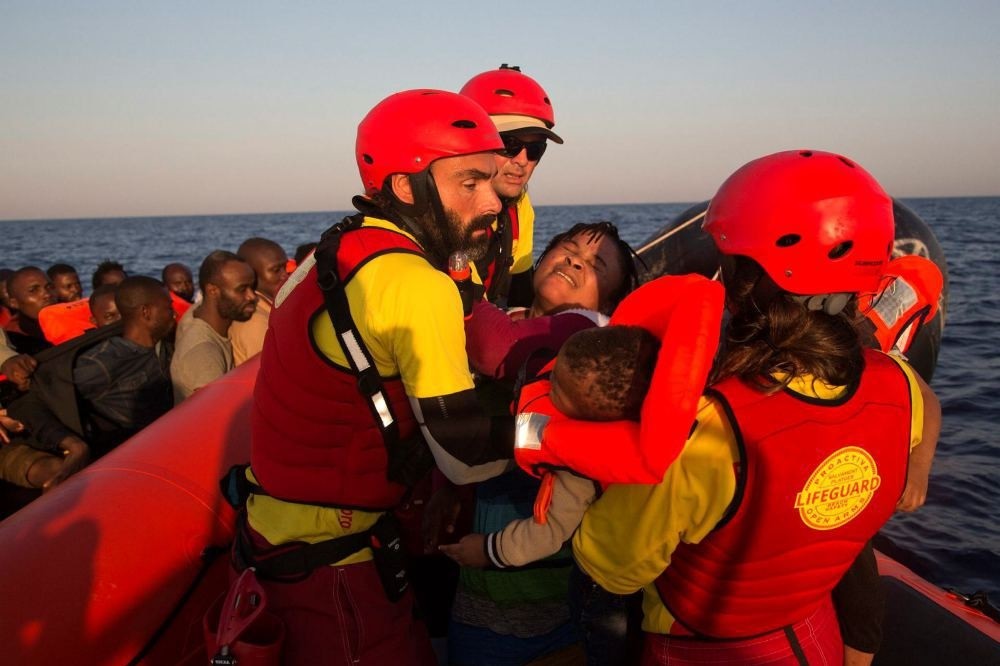 A woman from Nigeria and her baby are helped by members of the Proactiva Open Arms NGO, before transferring them to an Italian navy ship.
by Compiled from Wire Services Aug 24, 2016 12:00 am

New and more dangerous smuggling practices and attempts to reach Europe by riskier routes have led to a spike in the number of migrants dying as they attempt to cross the Mediterranean, according to a new analysis released Tuesday. The International Organization for Migration's Global Migration Data Analysis Center in Berlin said 2,901 people died or disappeared crossing the Mediterranean in the first six months of 2016, a 37 percent increase over the first six months of last year. Most of the deaths, 2,484, occurred on the so-called Central Mediterranean route from North Africa to Italy, where some 70,000 people crossed in the first half of 2016. "The numbers have not increased hugely in terms of those crossing, but the risk of death remains high and is increasing," said Frank Laczko, head of the Berlin center.

The Central Mediterranean route has always been the most dangerous route because of the length of the journey, and smugglers continue to overfill unseaworthy vessels with desperate migrants. Adding to the problem now, however, are more frequent instances where smugglers are sending multiple boats at once, making rescue operations more difficult. In addition, newer routes, particularly from Egypt, are longer and riskier, and search and rescue efforts are often carried out farther away from land. "Smugglers are showing absolutely no interest in the welfare of the people who are paying for their services, and cramming unseaworthy vessels with more and more people to increase profits," Laczko said. He added that further study needs to be done to determine whether other factors in the rising death toll may be at play, like whether the overland journey to the coast has become so grueling that migrants undertake the Mediterranean crossing already undernourished and exhausted. The number of deaths in the Central Mediterranean peaked in May at 1,130, and dropped to 388 in June, 208 in July and only 29 so far in August, but Laczko said it's too early to tell whether this may be part of a trend.

In the Eastern Mediterranean, however, few deaths have been reported since a March deal between the EU and Turkey, combined with Balkan border closures to migrants, has led to a dramatic drop in new arrivals. Where some 885,000 migrants crossed from Turkey to Greece along the route in 2015, the IOM reported that new arrivals are down 98 percent since the March 20 agreement. Some 154,000 arrived in Greece in the first half of the year, but almost all in the first three months. A total of 376 deaths were recorded in the Eastern Mediterranean in the first six months of 2016, but there were only 10 in April and none in May or June, according to the report. Laczko said there are no indications that the EU-Turkey agreement has been forcing people to attempt the more perilous Central Mediterranean crossing, though in recent days there have been reports of some trying to make it to Italy from Egypt. Laczko said the report shows there's a need for more legal channels for migrants to be able to come to Europe, but also for better information campaigns to make sure would-be migrants understand the dangers of the journey.

Meanwhile, Germany has agreed to take in hundreds of migrants who are blocked in Italy in a move that might revive the European Union's failed relocation program, Italy's Interior Minister Angelino Alfano said on Tuesday. As part of a deal to relieve pressure on Europe's frontline states in the migration crisis, the European Commission last year devised a plan aimed at moving thousands of new arrivals away from Italy and Greece towards other EU members. Under the scheme, up to 40,000 migrants could be relocated from Italy over two years, but so far only a few hundred have been flown out with many EU allies apparently reluctant to welcome in asylum seekers and refugees. "Up until now, the relocation has been a real flop," Alfano told la Repubblica TV. "(But) today we have heard that from September hundreds of refugees will be able to go each month to Germany. If things go well with Germany, we think they will also go well with other countries," he added.
RELATED TOPICS