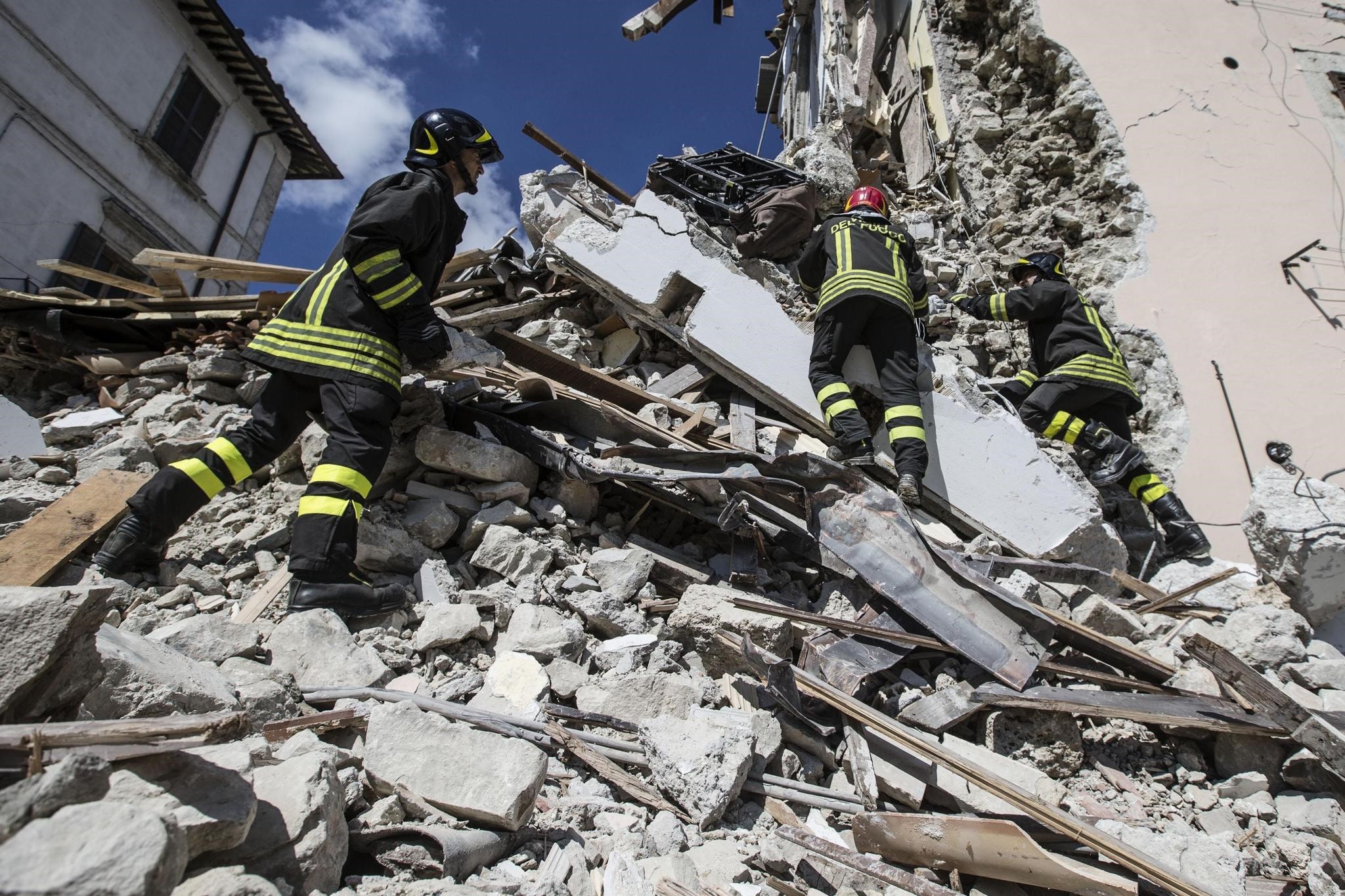 The provisional death toll for the earthquake in central Italy has risen to 250 people while the number of injured stands at 365, Italy's civil protection service said Thursday.

A day after a shallow quake killed 250 people and leveled three small towns, a 4.3 magnitude aftershock sent up plumes of thick gray dust in the hard-hit town of Amatrice. The aftershock crumbled already cracked buildings, prompted authorities to close roads and sent another person to the hospital.

It was only one of the more than 470 temblors that have followed Wednesday's pre-dawn quake.

Firefighters and rescue crews using sniffer dogs worked in teams around the hard-hit areas in central Italy, pulling chunks of cement, rock and metal from mounds of rubble where homes once stood. Rescuers refused to say when their work would shift from saving lives to recovering bodies, noting that one person was pulled alive from the rubble 72 hours after the 2009 quake in the Italian town of L'Aquila.

"We will work relentlessly until the last person is found, and make sure no one is trapped," said Lorenzo Botti, a rescue team spokesman.

Worst affected by the quake were the tiny towns of Amatrice and Accumoli near Rieti, 100 kilometers (60 miles) northeast of Rome, and Pescara del Tronto, 25 kilometers (15 miles) further to the east.

Many were left homeless by the scale of the destruction, their homes and apartments declared uninhabitable. Some survivors, escorted by firefighters were allowed to go back inside homes briefly Thursday to get essential necessities for what will surely be an extended absence.

"Last night we slept in the car. Tonight, I don't know," said Nello Caffini as he carried his sister-in-law's belongings on his head after being allowed to go quickly into her home in Pescara del Tronto.

Caffini has a house in nearby Ascoli, but said his sister-in-law was too terrified by the aftershocks to go inside it.

"When she is more tranquil, we will go to Ascoli," he said.

Charitable assistance began pouring into the earthquake zone in traffic-clogging droves Thursday. Church groups from a variety of Christian denominations, along with farmers offering donated peaches, pumpkins and plums, sent vans along the one-way road into Amatrice that was already packed with emergency vehicles and trucks carrying sniffer dogs.

Other assistance was spiritual.

"When we learned that the hardest hit place was here, we came, we spoke to our bishop and he encouraged us to come here to comfort the families of the victims," said the Rev. Marco as he walked through Pescara del Tronto. "They have given us a beautiful example, because their pain did not take away their dignity."

Italy's civil protection agency said the death toll had risen to 250 Thursday afternoon with at least 365 others hospitalized. Most of the dead — 184 — were in Amatrice. A Spaniard and five Romanians were among the dead, according to their governments.

There was no clear estimate of the missing, since the rustic area was packed with summer vacationers ahead of a popular Italian food festival this weekend. The Romanian government alone said 11 of its citizens were missing.

As the search effort continued, the soul-searching began.

Italy, which has the highest seismic hazard in Western Europe, also has thousands of picturesque medieval villages with old buildings that do not have to conform to the country's anti-seismic building codes. Making matters worse, those codes often aren't applied even when new buildings are built.

"In a country where in the past 40 years there have been at least eight devastating earthquakes ... the only lesson we have learned is to save lives after the fact," columnist Sergio Rizzo wrote in Thursday's Corriere della Sera. "We are far behind in the other lessons."

Some experts estimate that 70 percent of Italy's buildings aren't built to anti-seismic standards, though not all are in high-risk areas. After every major quake, proposals are made to improve, but they often languish in Italy's thick bureaucracy and chronic funding shortages.

Premier Matteo Renzi, visiting the quake-affected zone Wednesday, promised to rebuild "and guarantee a reconstruction that will allow residents to live in these communities, to relaunch these beautiful towns that have a wonderful past that will never end."

Geologists surveyed the damage Thursday to determine which buildings were still inhabitable, while Culture Ministry teams were fanning out to assess the damage to some of the region's cultural treasures, especially its medieval-era churches.

Italian news reports Thursday said prosecutors investigating the quake were looking in particular into the collapse of Amatrice's "Romolo Capranica" school, which was restored in 2012 using funds set aside after the last major quake in 2009.

In recent Italian quakes, some modern buildings — many of them public institutions — have been the deadliest. Those included the university dormitory that collapsed in the 2009 L'Aquila quake, killing 11 students and the elementary school that crumbled in San Giuliano di Puglia in 2002, killing 27 children — the town's entire first-grade class — while surrounding buildings survived unscathed.

Major quakes in Italy are often followed by criminal charges being filed against architects, builders and officials responsible for public works if the buildings crumble. In the case of the L'Aquila quake, prosecutors also put six geologists on trial for allegedly having failed to adequately warn residents about the temblor. Their convictions were overturned on appeal.

"The dogs from our dog rescue unit make us think there could be something," said Danilo Dionisi, a spokesman for the firefighters.

Emergency services set up tent cities around the quake-devastated towns to accommodate the homeless, housing about 1,200 people overnight. In Amatrice, 50 elderly people and children spent the night inside a local sports facility.

"It's not easy for them," said civil protection volunteer Tiziano De Carolis, who was helping to care for the homeless in Amatrice. "They have lost everything: the work of an entire life, like those who have a business, a shop, a pharmacy, a grocery store."

Violeta Bratu and the 97-year-old bedridden man she cares for were among those who sought shelter at the Amatrice sports facility. Her dog, a white Bishon Maltese, rested at their feet.

"It's the only thing of mine here," she said.