German military may withdraw jets from İncirlik air base 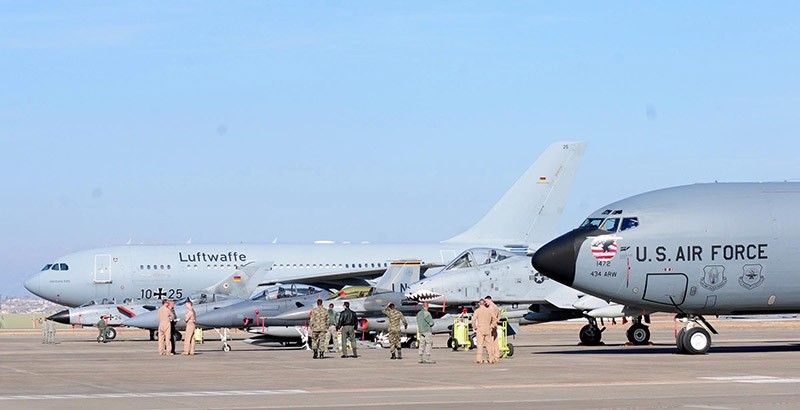 | DHA Photo
by reuters Aug 25, 2016 12:00 am
The German military is preparing or a possible withdrawal of six Tornado reconnaissance jets from Turkey's Incirlik Air Base given Ankara's continued refusal to allow German lawmakers to visit the facility, Der Spiegel magazine reported Thursday.

The magazine said the German Bundeswehr was evaluating whether it could move the warplanes and refuelling aircraft, which are supporting the U.S.-led coalition's aerial attacks on Daesh targets, to Jordan or Cyprus. It quoted unnamed military sources as saying such a move would interrupt the reconnaissance flights for at least two months.

The German Defence Ministry gave no details about its plans.

"We would like to continue the mission from Turkey, but there are alternatives to the base in Incirlik," the magazine quoted a ministry spokesman as saying.

The Social Democrats, junior partners in Chancellor Angela Merkel's coalition government, are now insisting that Germany should withdraw its aircraft and troops from the base given Turkey's refusal to allow German lawmakers to visit the base.

"The German government must immediately find other bases for the German soldiers," the magazine quoted Rainer Arnold, defence spokesman for the Social Democrats in parliament, as saying.

Turkey, angered by a resolution passed by the German parliament in June that branded the 1915 events as a "genocide", has denied German lawmakers access to the base.

Tensions between the two NATO allies have spiked after the July 15 failed coup attempt, with Turkey angry about Germany's sluggish response in condemning the putsch and expressing concern about those killed.

Merkel last month said the parliamentarians must be allowed to visit the 250 soldiers at the base, although she stopped short of threatening to withdraw the troops.

Arnold said he viewed an extension of the parliamentary mandate for the German military mission in Turkey as impossible. Without the approval of the SPD, the government cannot extend the mission when it expires in December.

Turkish officials blocked a visit to the base by several German lawmakers earlier this summer, and last week told reporters that they would not approve a separate visit planned by members of the German budget committee in October.

Arnold said the dispute would also prevent Germany's participation in a separate NATO AWACS airborne warning mission from a different Turkish base.

Without German participation, the NATO mission would be difficult to execute, the magazine reported, noting that all 16 of NATO's AWACS jets are based in Geilenkirchen, Germany, and a third of all crews are German soldiers.
Last Update: Aug 25, 2016 10:34 am
RELATED TOPICS