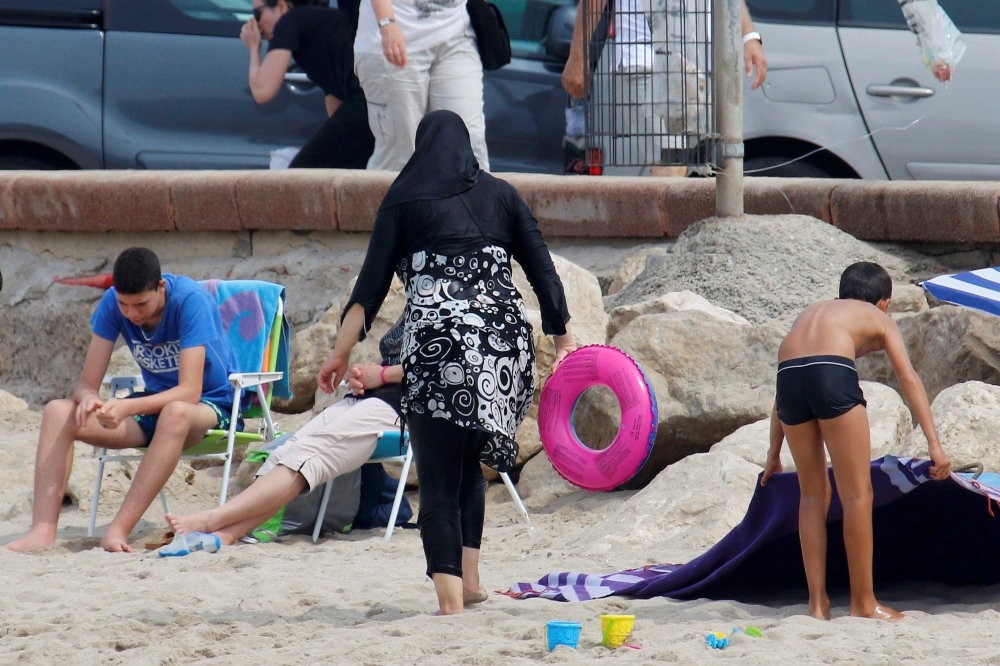 France, which recently banned the 'burkini,' drifts day after day toward Islamophobia with rising oppression against Muslims, while the country's secular constitution is under question on the basis of human rights

The burkini bans have sparked criticism all around the world and people took to social media to criticize the controversial ban.

Images of uniformed police appearing to require a woman to take off her tunic, and media accounts of similar incidents, have elicited shock and anger online this week. French police forced a woman to strip down and handed her a 32 euro fine in Nice's Promenade des Anglais beach for wearing a modest swimsuit, British paper Daily Mail reported on Tuesday. In the story, the paper said that the burkini ban in France is "turning into a farce." According to the piece, another similar incident happened at a beach in Cannes. A 34-year-old mother was ordered to leave the beach and was fined for simply wearing a headscarf.

Some fear that burkini bans in several French towns are worsening religious tensions. The bans, based on a strict application of secular policies, have exposed division within the government. Rights groups argue the bans are discriminatory and have appealed to the Council of State, which started to hold a hearing yesterday. A decision on whether to overturn the ban is expected within 48 hours. The Human Rights League and the Collective Against Islamophobia in France say the mayor's decree violates basic freedoms of dress, religious expression and movement.

President Francois Hollande's government has backed the decisions taken by mostly conservative mayors to impose the ban, arguing that the burkini violates French laws on secularism. Prime Minister Manuel Valls told BFM television that burkinis represent "the enslavement of women," but said enforcement of the bans must be handled respectfully.

But Education Minister Najat Vallaud-Belkacem, a feminist with North African roots, said that while she doesn't like the burkini swimsuit, bans of the garment are politically driven and unleashing racist sentiment. "My dream of society is a society where women are free and proud of their bodies," she said on Europe-1 radio. "This clears the way for racist slogans," Vallaut-Belkacem said in the radio interview on Thursday. "It raises the question of individual liberties," Vallaut-Belkacem added. The debate intensified as pictures began circulating online earlier in the week that show a woman surrounded by four policemen removing her long-sleeved top on a beach in Nice. On Wednesday, former president and upcoming election hopeful Nicolas Sarkozy called the burkini a "provocation" in comments to channel TF1.

Nice, which is on high alert following a deadly terrorist attack during Bastille Day celebrations in July, is one of several places in southern France where a burkini ban is now in place.

London Mayor Sadiq Khan also spoke out against the banning of the burkini swimsuit in France as he headed to Paris Thursday for talks with his French counterpart.

Khan, the first Muslim mayor of a major Western capital, spoke out after some 30 French towns banned the burkini, triggering a fierce debate about women's rights and secularism. "I don't think anyone should tell women what they can and can't wear. Full stop. It's as simple as that," he told the London Evening Standard newspaper.

"I don't think it's right. I'm not saying we're perfect yet, but one of the joys of London is that we don't simply tolerate difference, we respect it, we embrace it, and we celebrate it."

Khan was due to hold talks with Paris Mayor Anne Hidalgo covering the impact of Britain's vote in June to leave the European Union as well as trade and security.

"I'm here in Paris to make it clear that London is open - open to the world, open to trade, open for new business ventures and collaborations, open to new ideas, new talent and people," Khan said ahead of the visit. In 2010 France became the first European country to ban the burqa and niqab in public. In 2014 the European Court of Human Rights upheld the ban but said the law could appear excessive and encourage stereotyping.

After the recent developments, French Muslims are concerned that decisions taken by some municipal authorities to ban the burkini could lead to further stigmatization of Muslims, the head of a body representing Muslims in France said on Wednesday.

Anouar Kbibech, president of the French Council of Muslim Faith said after meeting Interior Minister Bernard Cazeneuve that there was growing concern especially among French Muslim women over the ban. "This is creating emotion and anxiety among Muslims in France and beyond," Kbibech said after the meeting. Cazeneuve said the decision to ban the swimwear must be proportionate and should not lead to stigmatization or the pitting of one French community against another.

A senior government official said authorities must be cautious and not exacerbate existing tensions as seen in Nice where a militant deliberately drove a truck into a festive crowd on July 14, killing more than 80 people.
RELATED TOPICS