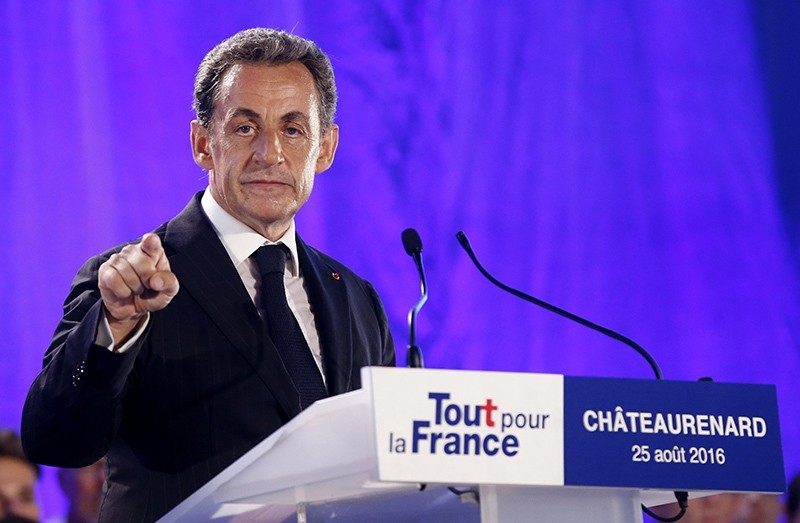 Former French President Nicolas Sarkozy of 'Les Republicains' party speaks during his first political campaign rally in Chateaurenard, France, 25 August 2016 (EPA Photo)
by Compiled from Wire Services Aug 26, 2016 12:00 am
Former French President Nicolas Sarkozy said on Thursday he would impose a nationwide ban on burkinis if elected back to the presidency in 2017, proposing to bring in a number of restrictive measures for Muslims living in France, under the name of secularism.

Hundreds of supporters waving French flags chanted "Nicolas! Nicolas!" and applauded as Sarkozy, a conservative president from 2007 to 2012 before losing an election to Socialist Francois Hollande, promised to protect the French people.

"I will be the president that re-establishes the authority of the state," Sarkozy told a crowd of more than 2,000 packing a sports hall in Chateaurenard, a Provence town where his Les Republicains beat the far-right Front National (FN) in regional elections last year.

"I want to be the president who guarantees the safety of France and of every French person," the 61-year-old said, sending a message that he wants to tackle the terrorist violence that has killed 230 people in attacks since January 2015.

For months he lagged in opinion polls behind Alain Juppe, a mild-mannered, more centrist former prime minister who is his main rival for the November primaries that will choose a conservative candidate for the election.

But his popularity, which had already started improving with party sympathisers in June, rose after terrorist attacks on a Bastille Day crowd in Nice and on a priest in Normandy.

Taking a hard line on a debate that has agitated France over the past weeks, Sarkozy told supporters in Chateaurenard, his first rally for the 2017 election, that the full-body swimwear known as the burkini should be banned throughout the country.

Several seaside towns have outlawed it, arguing that it breaks French laws on secularism, but there is no national ban.

"I refuse to let the burkini impose itself in French beaches and swimming pools ... there must be a law to ban it throughout the Republic's territory," he said to wide applause.

"Our identity is under threat when we accept an immigration policy that makes no sense," he said.

Sarkozy is seeking to win back votes from the far-right National Front whose rising popularity mirrors that of populist politicians in other countries that have appealed to voter worries over globalisation and immigration, such as U.S. Republican presidential nominee Donald Trump and the leaders of Britain's Brexit campaign.

Responding to an accusation by Prime Minister Manuel Valls that his proposals were brutal, Sarkozy said:

"The French people are not fascist because they consider there are security problems ... In my speech there is no fear, there is no hatred, there is just common sense."

In the TF1 channel interview, Sarkozy insisted that Muslims in France are French people "exactly like any other ones" but, when living in the country, they must "assimilate" the French language and way of life, the French regions and the history of France.

Muslim people shouldn't "impose their differences on the majority," he said.

Recently, Sarkozy has said that, in the name of France's secularism, he opposes pork-free options proposed by many school canteens for Muslim and Jewish children. He has also suggested that children born in France to parents staying illegally in the country shouldn't be granted French nationality.
Last Update: Aug 26, 2016 11:26 am
RELATED TOPICS