Europe's refugee crisis simmers despite efforts to solve it 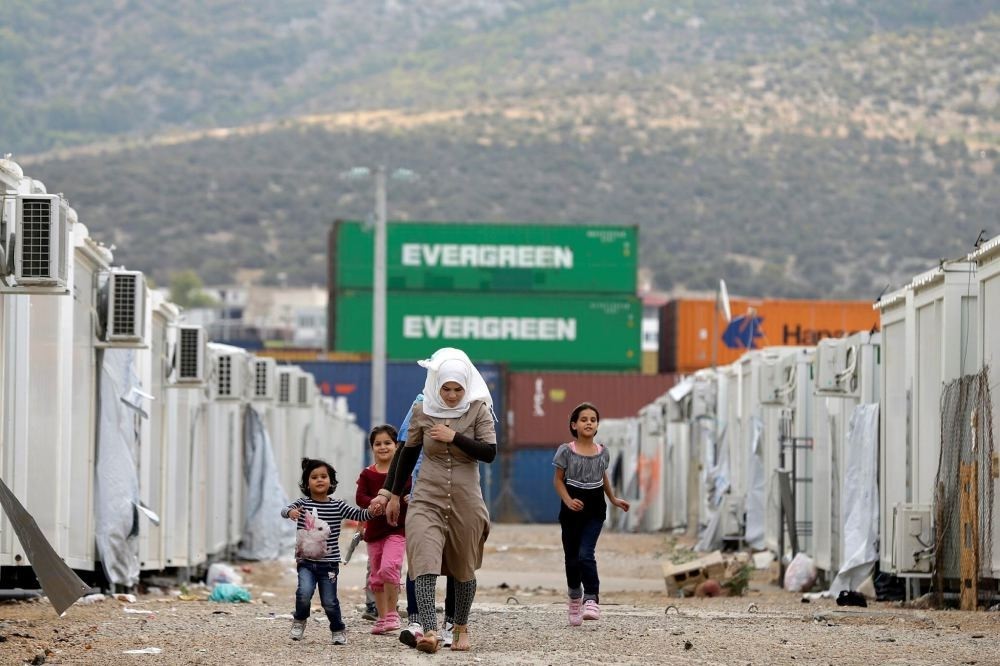 People walk at a refugee camp which houses about 3,200 refugees, in the western Athens' suburb of Skaramagas, Greece.
by Compiled from Wire Services Aug 29, 2016 12:00 am

Thousands of migrants continue to flee to European Union countries despite increasing anti-migrant sentiment and deaths in the Mediterranean Sea. The European Union has failed so far to create a common solution

Faced with more than 1 million migrants flooding across the Mediterranean last year, European nations tightened border controls, set up naval patrols to stop smugglers, negotiated an agreement with Turkey to limit the numbers crossing, shut the Balkan route used by hundreds of thousands, and tried to speed up deportations of rejected asylum-seekers. Yet many issues still remain. European nations continue to squabble about whether, and how, to share the newcomers between them and the issues that drove refugees to Europe in the first place, such as Syria's unrelenting war, are unresolved. Overall, 2,901 people have died or disappeared crossing the Mediterranean in the first six months of 2016, most along the dangerous central route to Italy, a 37 percent increase over last year's first half, according to the International Organization for Migration.

The numbers of migrants arriving in Greece have dropped dramatically since the March agreement with Turkey, but several thousand a month still make the journey, some 160,000 in the first half of this year. Over 58,000 people remain stuck in the financially struggling country, most hoping to continue north to nations like Germany or Sweden. The majority have applied for asylum, hoping to be relocated among EU nations, but the program is moving at snail's pace amid fierce resistance from eastern and central European countries. So far, only around 4,400 people have been relocated from southern Europe under a plan that's supposed to see 160,000 moved over two years through September 2017. Yet there's little Brussels can do to force any nations to comply.

About 70,000 migrants crossed the Mediterranean into Italy from January to June this year, similar to the same period last year. But with routes northward now restricted, there's nowhere for them to go and, as smugglers resort to more dangerous practices, more migrants are dying en route. Migrants are sleeping in hotels, homeless shelters, train stations and tent camps. The Tuscan city of Capalbio is putting them in fancy villas and Milan is readying a jail to take in some. Nigerians make up the biggest group of newcomers to Italy, followed by Eritreans, Gambians, Ivorians and Sudanese, according to the U.N. refugee agency. The wave of arrivals is testing Italy's social services and Premier Matteo Renzi's patience as he faces domestic resistance from the anti-immigrant Northern League and reluctance from Italy's EU partners to resettle asylum-seekers. To date, only 961 would-be refugees have moved out of Italy, according to the IOM.

Germany's top migration official predicts that fewer than 300,000 refugees will come to the country this year, a sharp drop compared with the height of the migrant crisis in 2015. Frank-Juergen Weise, the head of the Federal Office for Migration and Refugees, said in an interview in the German weekly Bild am Sonntag he expects between 250,000 and 300,000 new arrivals in 2016. Germany saw an unprecedented influx of asylum-seekers last year, due in part to Chancellor Angela Merkel's decision to allow migrants stuck in other European countries to come to Germany. Anti-migrant feeling has increased strongly in Germany over the past year, resulting in growing support for a nationalist party to the right of Merkel's Christian Democrats and a fall in popularity for the chancellor, who has stuck by her motto "we will manage."

Migrant numbers in Calais have soared this month, even though authorities shut down half of the city's wretched camp earlier this year, and the British and French governments erected security fences and announced measures to deter new arrivals. The French government says the number of migrants in the makeshift Calais camp known as the "jungle" has reached its highest official level yet: 6,901. Aid groups say it's closer to 9,000.

The discovery of 71 suffocated people in the back of a smuggler's truck in Austria a year ago triggered an outpouring of support for refugees. That now seems a distant memory. Then-Chancellor Werner Faymann urged Austrians to open their arms to the migrants, but faced increasing concerns that the country couldn't cope. Faymann changed course early this year, suddenly backing calls to shut Austria's border. He resigned in May amid falling support. His successor, Christian Kern, has continued on the restrictive path welcomed by most Austrians, even as he urges them to be open-minded toward new arrivals. Austria was the main force in the shutdown early this year of the Balkan route. After accepting more than 80,000 migrants last year, the country stands ready to turn back the first would-be refugee over the 37,500 limit it has set as a quota for 2016.
RELATED TOPICS