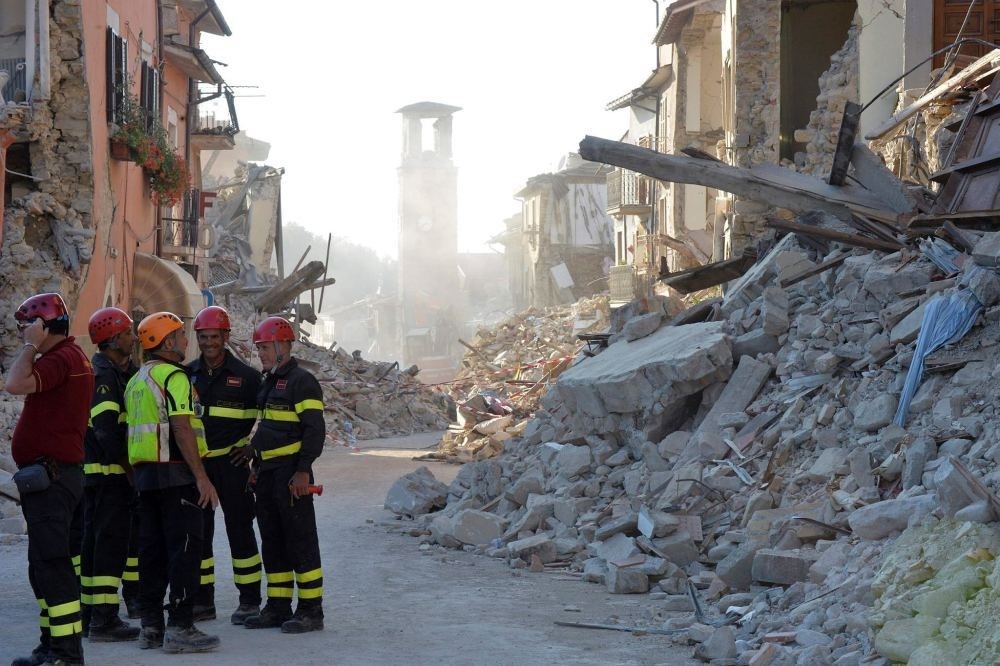 Firefighters and rescue workers stand near the damaged Santu2019Agostino church (C) and rubble and debris of damaged buildings.
by Compiled from Wire Services Aug 29, 2016 12:00 am
Bulldozers with huge claws and other heavy equipment rolled through Italy's quake-devastated town of Amatrice on Sunday, pulling down dangerously overhanging ledges and clearing rubble as investigators tried to figure out if negligence in enforcing building codes added to the quake's high death toll. Investigations will focus on a number of structures, including an elementary school in Amatrice that crumbled when the quake hit Wednesday. The school was renovated in 2012 to resist earthquakes at a cost of 700,000 euros. Questions also surround a bell tower in Accumoli that collapsed, killing a family of four sleeping in a neighboring house, including a baby of 8 months and a 7-year-old boy. That bell tower also had been recently restored with special funds allocated after Italy's last major earthquake in L'Aquila in 2009. The quake early Wednesday killed 291 people and injured hundreds as it flattened three medieval towns in central Italy. Giuseppe Saieva, the prosecutor in the regional capital of Rieti, said the high human death toll "cannot only be considered the work of fate." He said for now, police investigators remained focused on recovery efforts but once that emergency phase has passed, they will concentrate on the investigations.

Shoddy, price-cutting renovations, in breach of local building regulations, could be partly to blame for the high death toll, according to a prosecutor investigating the disaster. Prosecutor Giuseppe Saieva indicated that property owners who commissioned suspected sub-standard work could be held responsible for contributing to the quake's deadly impact. Saieva, who works in the Rieti region between Rome and the quake's epicenter, said the tragedy could not simply be filed away as an unavoidable natural disaster. "If the buildings had been constructed as they are in Japan they wouldn't have collapsed," he told La Repubblica. Within hours of the quake hitting on Wednesday Saieva was in Amatrice, the small mountain town hit hardest by the quake.

He is inspecting the damage there before opening a preliminary investigation for possible culpable homicide and causing a disaster. The crushed partition walls of a collapsed three-story villa were among the sights that caught his eye. "I can only think it was built on the cheap with more sand than cement," he said. A number of engineering and architectural experts have highlighted the widespread use of relatively cheap cement beams for house extensions and renovations as a possible factor explaining why so many buildings collapsed. Heavy and inflexible, the cement beams become deadly if released by shaking because they will crush older walls beneath them. "If it emerges that individuals cut corners, they will be pursued and those that have made mistakes will pay a price," the prosecutor said.

The issue of whether some of the deaths could have been avoided is particularly acute in the Amatrice area because it is so close 50 kilometers to L'Aquila, which was hit by a 2009 earthquake in which over 300 people perished. An outcry over the shoddy, corrupt building practices which led to so many buildings in the university city being inadequately prepared for a quake led to the national Civil Protection agency making almost 1 billion euros available for upgrading buildings in quake-vulnerable areas. But the take-up of grants has been low. Critics blame bureaucracy but others maintain that independent-minded villagers will always find the cheapest way of getting their renovations done, whatever the risks. Some 40 percent of the Italian population, 24 million people, live in zones vulnerable to earthquakes and the risk that entails has been a subject for the country's finest minds for centuries. As early as the first century, an advisor to the emperor Vespasian, Pliny the elder, was making recommendations on how buildings could be designed to withstand tremors. And the thicker walls and stone piers that are features of many modern-day quake-proof buildings, were also included in plans drawn up by Renaissance architect Pirro Ligorio in the late 16th century, after southern Italy was devastated by an earthquake that caused 2,000 deaths.

Experts however say protecting Italy's unrivaled artistic and architectural heritage is far from straightforward. "If we start from the idea of upgrading every old building to comparable safety levels of a modern building built to anti-seismic norms, we have to accept that we will never get there," said Paolo Bazzurro, a professor in construction techniques at the University of Pavia. The trend away from traditional wooden roofs and beams is not the only problem: widening window openings and the removal of reinforcing chains embedded in walls have also contributed. "These things make buildings more vulnerable," said Bazzurro.
RELATED TOPICS