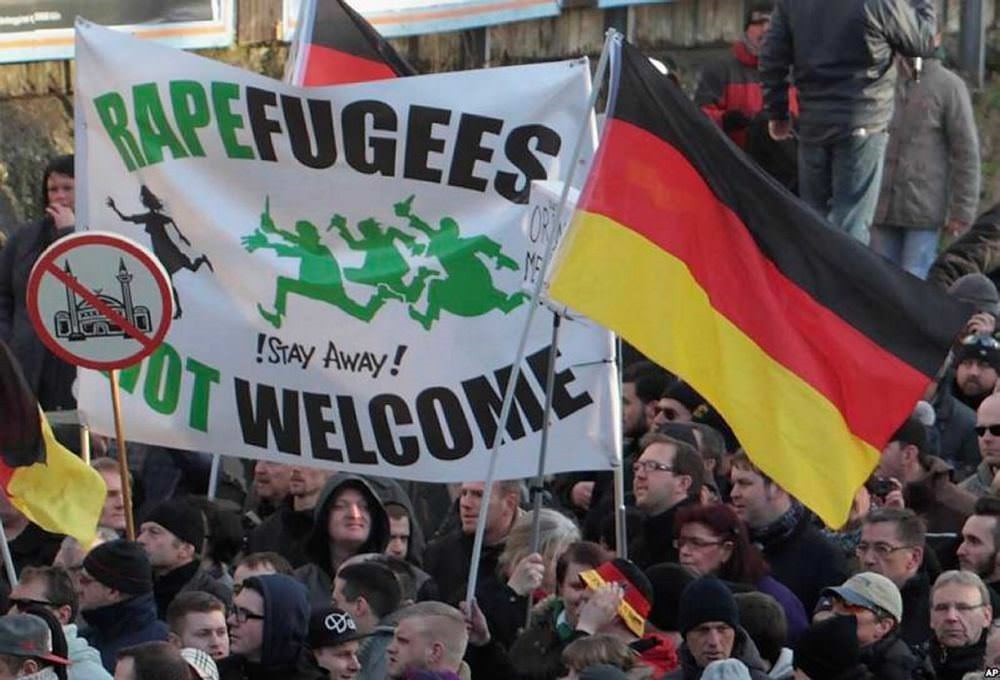 Supporters of far-right groups protesting against refugees and Islam in Germany (AFP PHoto)
by Ayşe Şahin Sep 03, 2016 12:00 am

With no solution to the refugee crisis, racism, xenophobia and ultra-nationalism have dominated the social and political environment in Europe, which is gripped by anti-Muslim hysteria

Europe, gripped by anti-Muslim hysteria, which often goes to the extent of associating Islam with terrorism, now seeks comfort in extremist right-wing political figures who have been drumming up support with ultra-nationalist and anti-immigrant rhetoric bordering on racism.

The campaign slogan of U.S. presidential candidate Donald Trump, "We will make America great again," spawned imitators in Europe who adopted similar nationalistic, populist discourse that apparently is aiming at Europeans who are seized by fear due to an ongoing terror threat engulfing the continent. "Austria first," has been the motto of Austrian presidential candidate Norbert Hofer from the far-right Freedom Party throughout his campaigning. In similar vein, the Netherlands' far-right Party for Freedom's (PVV) election manifesto that was released late August was titled, "The Netherlands is ours again."

Security concerns, shrinking economy and dissatisfaction with centrist parties all cemented such nationalist trend, but thousands of immigrants who flocked to Europe leaving the continent grappling with issues of integration are seen as the main cause of the emergence of protectionist and anti-immigration far-right parties. Moreover, the electoral success achieved by such extremist parties has also alarmed some moderate parties on the social-democratic line, leading them too to shift from moderation to extremism within the last several months to avoid losing.

"This is a little bit like the tactics Bill Clinton used when he ran for president. Realizing that Reaganism was entrenched in American society, he drew on its principles and moved the democratic party more to the right," says Professor Daniel Gordon from the University of Massachusetts, adding that the anti-immigration posture that used to be distinctive to the right "is now working its way into the language of the other parties."

Now, amid all European far-right parties, it would be safe to say Austria's Freedom Party (FPO) is closest to success. The polls predict a win for the FPO's presidential candidate Norbert Hofer, who is running against independent candidate Alexander Van der Bellen in the upcoming elections. Hofer lost narrowly to his rival Bellen in May's run-off vote but the polls will be re-held in October, since an objection was filed by the FPO upon its claim that the votes were not counted properly. Now as the re-run draws near, polls indicate that Hofer has a strong chance to become the first far-right head of state in the EU.

Hofer has been campaigning to tighten his country's borders and restricting benefits for immigrants. His skepticism about the EU and anti-immigrant stance have brought him a broad swell of support, particularly when there is a massive bulk of Austrians who feel negatively not only about the refugees seeking asylum in the country, but also its residents of Islamic origin.

As for the Netherlands, its far right party follows the suit, however, slightly ramping up the rhetoric. The Dutch far-right PVV that is allies with Austria's FPO, launched a fresh manifesto late in August calling for "the de-Islamization" of the Netherlands ahead of the parliamentary elections set to take place in 2017. The manifesto blatantly targets Muslims, as it calls for closure of all mosques and Islamic religious schools and vows to ban the Quran, the holy book of Muslims. The party's manifesto includes demands such as prohibiting entry to refugees from Muslim countries and banning the headscarf in public spheres.

Party leader Geert Wilders, already notorious for his racist remarks, appeared twice before the court for "inciting hatred." Wilders leads in the polls to become the next Dutch prime minister.

Ersin Kalaycıoğlu, professor of Political Sciences, points to the convenience of the environment for the rise of the far-right in Europe. Kalaycıoğlu, says the populist, nativist, chauvinist, xenophobic and ethno-racist nationalist attitudes seem to be emerging in an environment of anger, fear and diminished trust that the liberal democratic establishment will be able to deliver tangible benefits for those swathes of the population who seem to be on the way to pauperization in the socio-political system."

Kalaycıoğlu adds that some politicians do not miss the opportunity "to use these migrants as scapegoats in explaining the downturn of the industries and the loss of jobs."

And those who do not follow anti-immigration policies in such conjecture apparently are doomed to fail in the political platform, as in the case of German Chancellor Angela Merkel. A recent Forsa poll has indicated that there is a perpetual decline in support for Merkel and her Christian Democratic Union Party, which receded to 33 percent, eight points down from last year.

Her open door policy and taking in nearly a million refugees have unsettled many German citizens who developed concerns over how Germany will integrate and could afford the expenses of such "whopping" number of refugees. Such fears brought far-right, anti-immigration Alternative for Germany (AFD) to the forefront, which is predicted to make vast gains in the forthcoming state elections in the eastern state of Mecklenburg-Vorpommern and capital Berlin.

In France the right is still a minority, but compared to the past it is more influential over the parties in rhetoric. Its far-right National Front's leader Marine Le Pen has a slim chance of becoming the next French president in the upcoming 2017 presidential elections, nonetheless, her xenophobic and anti-immigrant discourse has been infecting some other politicians who set their sights on the votes of the fearful French. The election pledges of Former French President Nicholas Sarkozy who has recently declared candidacy for next year's elections is strong indicator that there is an inclination toward the far-right in France as well.

The terror threat is real in France, as the country has been rocked by a number of terrorist attacks since the Paris attacks erupted two years ago. Currently the entire continent is basically on needles and pins in fear of terrorism. The worst is yet to come unless the West's panic is alleviated by the authorities, but contrary to such an expectation, some political opportunists have chosen to fan anti-Muslim sentiment to achieve electoral gains by abusing the current panic atmosphere. However, repercussions of extreme polarization on the continent could be deadly, experts believe, as it would breed further terrorism.

A poll conducted in August by polling institute IPSOS, asking more than 16,000 people in 22 countries how they felt about refugees and their country's immigration policies, revealed that there are reservations among Europeans about the refugees and fear of terrorists is rather high across the continent. Thirty-one percent of respondents agreed with the statement "There are terrorists pretending to be refugees who will enter my country to cause violence and destruction." Another 30 percent chose the "somewhat agree" option. A different survey conducted by Pew Research Center in July suggests that "half or more believe incoming refugees increase the likelihood of terrorism in their country."

Speaking of refugees, Denmark appears to be the least attractive country in Western Europe for refugees, with stringent policies; the Danes pursue to keep the refugees out. Denmark, being an EU member and signatory to multiple U.N. conventions, cannot shut its doors to refugees seeking shelter in the country but, the government is coming up with various dissuasive laws to impede the arrival of refugees, such as strict border controls and "a jewelry law" that allows police to seize refugees' valuables. The Associated Press (AP) reported on Tuesday that the Danish government proposed the enactment of a fresh law that would give police the warrant to reject asylum seekers at the borders at times of crisis.

Ulrik Pram Gad, an associate professor at Aalborg University in Denmark says: "One of the most important effects of the current domestic turn to cultural nationalism is that it hinders Denmark [and EU] in pursuing the right foreign policy."

As for Hungary, the government's motivation of anti-immigrant policies is mostly based on Islamophobic narrative. The country's rightist Prime Minister, Viktor Orban, misses no chance to attack the EU for its migrant policies. Orban is also notorious for his extreme stance against the refugees.

Bod Peter Akos, Hungarian professor of economics, who served as the minister of Industry and Trade in József Antall's cabinet said: "In the policy of Mr Orban, the prime minister, there is a strong emphasis on national sovereignty - sounds logical in a time of European crisis, but restoration of sovereignty is a dubious concept for a medium/small country which is as open economically as Hungary [or Slovakia, or Poland]. Still, certain parties just mirror the general feeling of uncertainty, disorientation and disenchantment of an important part of the society - and 'restoring the national control over our life' is a vote-catcher line."

Akos added: "The Hungarian government follows an extreme attitude toward refugees: It is practically impossible to get a legal refugee status here, and there is a strong campaign in public media against migrants, feeding - as i can see it, the inherent fear of the general public about migrants, particularly coming from Islamic countries or Africa."
Last Update: Sep 03, 2016 1:10 am
RELATED TOPICS