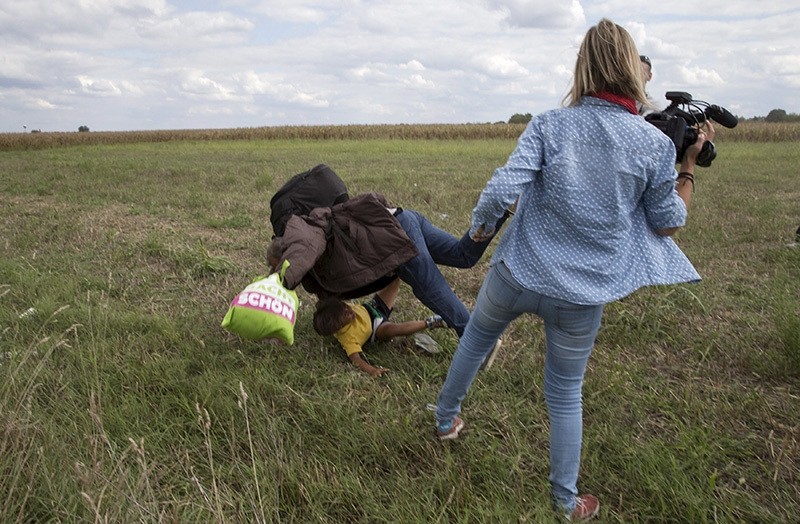 A refugee carrying a child falls after tripping on TV camerawoman (R) Petra Laszlo while trying to escape from a collection point in Roszke village (Reuters Photo)
by Compiled from Wire Services Sep 07, 2016 12:00 am

A Hungarian television camerawoman who made headlines last September after appearing to trip and kick migrants who were fleeing police has been indicted, prosecutors said Wednesday.

"The accused is charged by the Public Prosecutor's Office of Szeged with breach of the peace," said a statement from Csongrad county chief prosecutor Zsolt Kopasz.

Her trial will be held in the southern city of Szeged, the Associated press reported.

In the footage, which sparked global outrage, Petra Laszlo can be seen tripping up a man sprinting with a child in his arms, and kicking another running child near the town of Roszke, close to the border with Serbia.

"The violent actions of the accused did not inflict injury, however her behaviour was capable of provoking indignation and outcry in the members of the public present at the scenes," according to the statement, AFP reported.

It later emerged that Laszlo, who was fired over her actions, had been working for N1TV, an internet-based television station close to Hungary's far-right Jobbik party.

The incident on September 8, 2015 occurred as hundreds of migrants broke through a police line at a collection point close to the Serbian border.

Laszlo later told Russian newspaper Izvestia that her life was "ruined" and she was considering moving to Russia.

According to the prosecutor, an investigation concluded that more serious charges would not be brought as there had been no reasonable chance of the accused causing injury.

Nor was there evidence that "the conduct of the accused was motivated by ethnic considerations or by the migrant status of the victims," said the statement.

Last September thousands of migrants crossed into Hungary each day as the country, a southern gateway into the EU's passport-free Schengen zone, became a temporary hotspot of the migration crisis.

A week after the incident, Hungarian soldiers completed the closure of the 175-kilometre-long (110-mile-long) border with a fence reinforced with razor wire.

Some 400,000 migrants passed through Hungary last year bound for western Europe, but the number plummeted after the border was sealed off.

The Syrian man allegedly tripped up by Laszlo was later given a job by a Spanish football coaching school, while his son ran with superstar Cristiano Ronaldo onto the pitch in Madrid before a match.