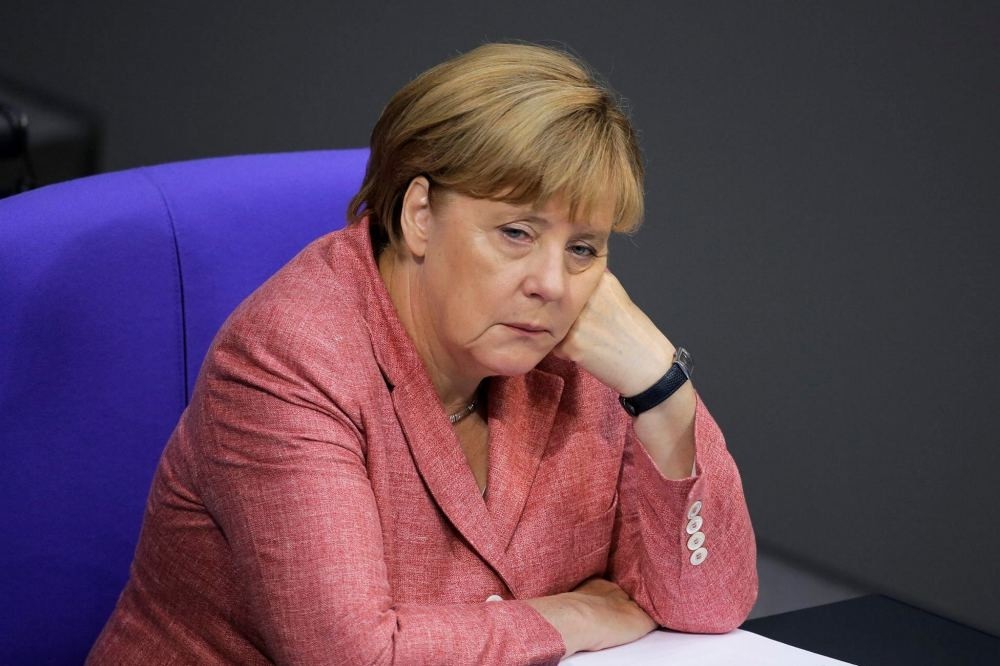 German Chancellor Angela Merkel resting her head as she attended the budget 2017 debate at the Bundestag in Berlin, Sept. 6.
by Daily Sabah with Wires Sep 09, 2016 12:00 am

German Chancellor Merkel, in power for 11 years, with her popularity lower than ever, has been left isolated by her allies. However, she is adamant on not changing her ‘open door' policy to refugees and migrants

After being relegated to third place behind an anti-immigration party in the regional election in her constituency in Mecklenburg-West Pomerania, German Chancellor Angela Merkel is suffering from low popularity, cutting a lonely figure in her struggle for resisting pressure to change refugee policy. Even though Merkel defends her immigration policy and calls on all political parties to fight against xenophobic and Islamophobic rhetoric, her support is gradually diminishing in the German parliament and among political parties.

Merkel's conservative Bavarian allies the Christian Social Union (CSU) party has put heavy pressure on Merkel to change course on her refugee policy and is urging her to apply tougher policies on migrants, while favoring migrants primarily from Europe's "Christian-occidental cultural sphere." The CSU party also has demanded a ban on the Islamic full-face and partial-face veils, an end to dual citizenship, iron-clad rules that newcomers socially integrate and learn German and an upper limit of 200,000 asylum seekers a year. The party, which has long and fervently attacked Merkel's liberal stance on refugees that welcomed a million asylum seekers into the European Union's top economy last year plans to present the paper at a meeting starting Friday. It also reiterated its long-standing opposition to admitting Turkey to the EU, or granting its citizens eased visa conditions to the bloc as part of a deal to halt the refugee flows to Europe.

The move comes after the right-wing populist and anti-immigration Alternative for Germany (AfD) beat Merkel's party in a state vote. The state vote was held exactly one year after Merkel opened German borders to a mass influx of Syrian refugees and other migrants that would swell arrivals to the country to 1 million asylum seekers in 2015. While her welcoming stance initially won much praise, the mood has since considerably darkened as worry has grown on how to integrate the newcomers.

The chancellor was slapped down on Wednesday in her own parliament, being ordered to sit down after interrupting a speech in the Bundestag. "One second, Chancellor Merkel, that's enough… And if you must, then not here up front," said the politician chairing the debate in the parliament.

Merkel, whose long-stellar approval ratings have taken a dive amid the refugee crisis, came under fresh fire over her pro-immigration policy stance. The AfD has capitalized on widespread discontent about the arrival of the large number of migrants, which it argues resulted from Merkel's promise of sanctuary to Syrian refugees. The right-wing populist AfD party clinched almost 21 percent in its first bid for seats in the regional parliament of Mecklenburg-Western Pomerania. Merkel's conservative Christian Democratic Union (CDU) won just 19 percent in its worst ever score in the ex-communist northeastern state, while the Social Democrats maintained top place with over 30 percent.

The state election in the sprawling farming and coastal state is the latest to serve as a bellwether ahead of national elections in late 2017. Merkel, in power for 11 years, has not yet said whether she will run for a fourth term but is widely expected to do so. Although the regional election was held in Germany's poorest and least populous state, the outcome was significant in part because it is home to Merkel's constituency, the port city of Stralsund.
RELATED TOPICS