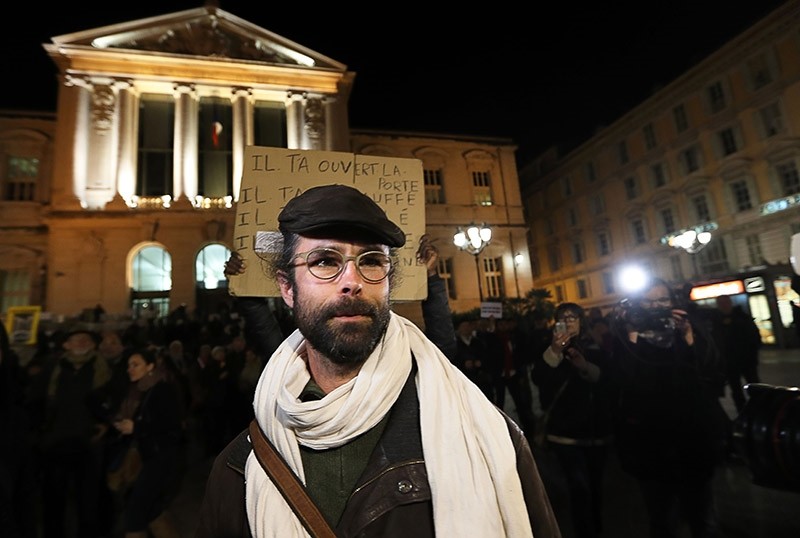 French farmer Cedric Herrou (C) leaves the courthouse of Nice, southeastern France, on Jan. 4, 2017, after his trial for allegedly assisting migrants to enter and remain illegally in France. (AFP Photo)
by Jan 05, 2017 12:00 am

A French farmer who faces up to five years in prison for helping African migrants slip into the country and find shelter told his trial Wednesday he merely wanted to relieve their suffering.

Cedric Herrou, 37, has become something of a folk hero around the French-Italian border for driving migrants across the frontier, under the noses of the French police, and then putting them up.

He is one of three people in the area to appear in court recently for illegally assisting migrants travelling up through Europe after crossing the Mediterranean in rickety boats.

Their cases have pitched the spirit of solidarity against the letter of the law at a time when border controls and migration have become hot political issues.

At his trial Wednesday in the southern city of Nice, the farmer struck an unrepentant tone.

Public prosecutor Jean-Michel Pretre called for Herrou to be given an eight-month suspended term, for his vehicle to be confiscated and for his driving licence to be restricted to driving only for professional use.

He accused Herrou of using the court as a "political platform" to justify his acts.

"We find ourselves in the situation of an intentional trial, the product of a media strategy designed to showcase a cause," Pretre said.

"It's not the job of the judicial system to change law, and it's not its job to give lessons in diplomacy to such-and-such a country," he said.

Judgement is expected on February 10.

Herrou's olive farm sits in a valley near the frontier with Italy, near a popular route for migrants trying to skirt border controls established between the neighbours after last year's terror attacks in France.

Cutting a bohemian figure with his black beard, round glasses and flat cap, he claimed he was picking up the slack for "a state that put borders in place and is absolutely not managing the consequences."

Addressing hundreds of supporters outside the courthouse earlier, he declared: "If we have to break the law to help people, let's do it!"

He has been outspoken in his criticism of France's response to the migrant crisis, accusing the police of detaining "thousands" of minors and dumping them back across the border in Italy.

Police regularly remove migrant youths from trains crossing into France and send them back to Italy. Cars crossing the frontier are also frequently checked.

In October, Herrou led a group of activists who occupied a disused holiday village belonging to state railway company SNCF and opened it up to a group of migrants who had been staying on his farm.

Police intervened after three days to evacuate the makeshift camp, arresting the farmer.