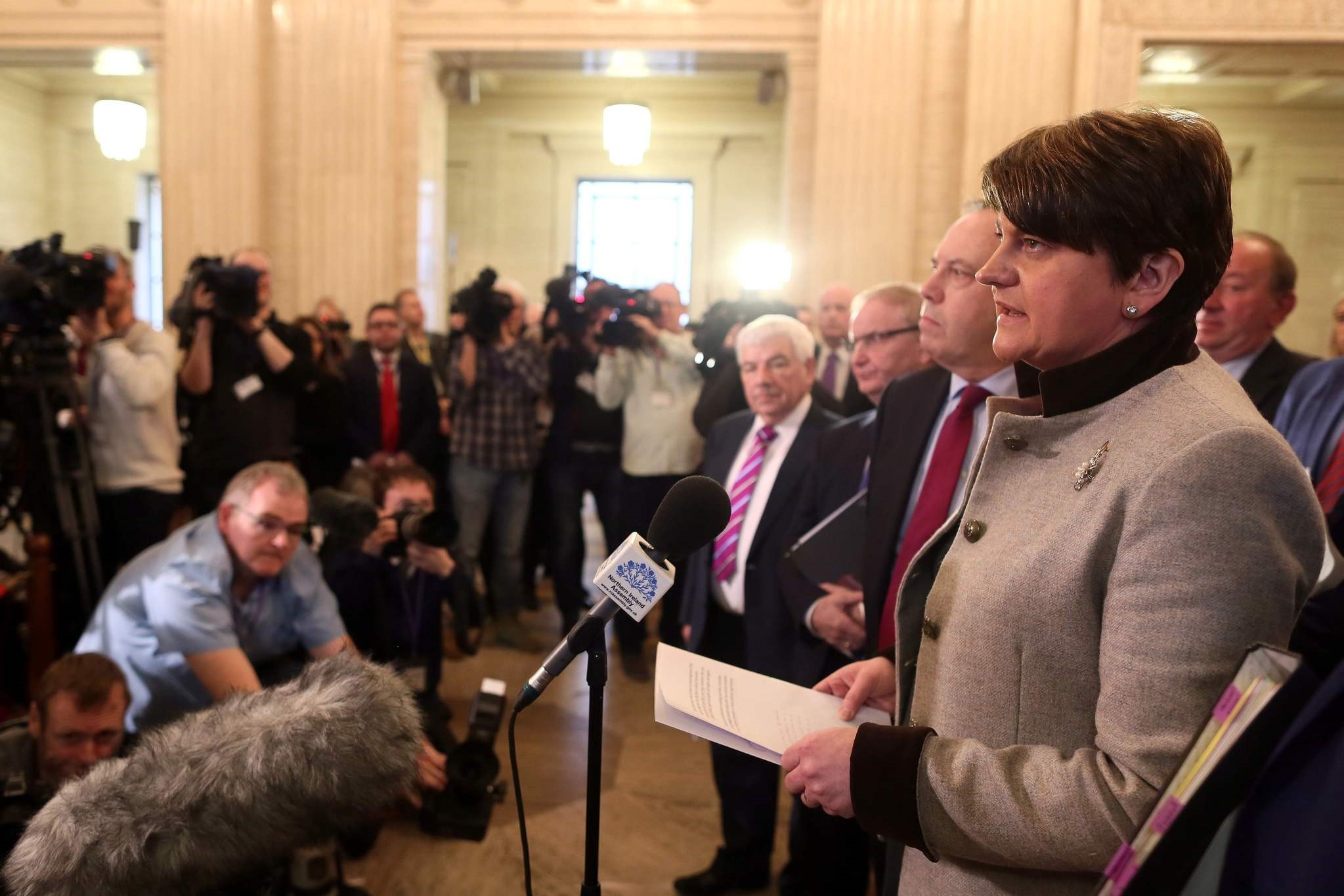 Democratic Unionist Party leader Arlene Foster, speaks to members of the media in the Great Hall at Stormont before the start of the Assembly in Belfast, Northern Ireland. (AFP Photo)
by Jan 16, 2017 12:00 am

Northern Ireland was on Monday headed for snap elections within weeks as its worst political crisis in years raised fears of an end to hard-won stability while impacting upcoming Brexit negotiations.

The nationalist Sinn Fein party passed up its last chance to nominate a new deputy first minister to the power-sharing executive to replace Martin McGuinness, meaning elections are all but certain.

McGuinness resigned last week in protest over a botched green heating scheme following weeks of tensions with the Democratic Unionist Party (DUP), which supports British rule of the province.

The government's Northern Ireland minister James Brokenshire is now expected to call elections -- the second in 10 months -- to be held within six weeks.

"Sinn Fein have indicated that they're not intending to put a replacement forward. The clear indications are that we are moving towards an election," Brokenshire told the BBC on Sunday.

The crisis over a green energy scheme instigated by Arlene Foster, leader of the DUP, when she was economy minister has been simmering for months.

She has repeatedly refused to step aside temporarily to allow an investigation into a scheme which could cost Northern Ireland taxpayers up to £490 million ($592 million, 558 million euros) and McGuinness last week quit his position, accusing Foster of "deep-seated arrogance".

Northern Ireland's power-sharing executive and assembly were formed under the 1998 Belfast Agreement that effectively ended three decades of political violence in Northern Ireland.

The sectarian voting patterns that have always characterised elections in the province's deeply divided society could remain intact in the next vote, bringing little prospect of an end to the political stalemate.

If the two biggest parties are returned as expected but the deadlock remains, then a second election could be called if there is failure to form an executive within three weeks of the vote.

The other option would be direct rule of Northern Ireland from the British parliament in London.

The last period of direct rule ended in 2007.

In the Brexit referendum, 56 percent in Northern Ireland voted to stay in the EU compared to a national result of 52 percent in favour of leaving.

The DUP was the only one of the main political parties that voted to leave the bloc.

British Prime Minister Theresa May has said she plans to launch the EU exit procedure by the end of March at the latest, which could coincide with elections and subsequent negotiations to form a government.

May's spokeswoman said the prime minister had spoken to both Foster and McGuinness on Monday to underline "the importance of finding a way forward, particularly in the context of wanting to make sure that Northern Ireland has a voice in the UK exit from the EU as we approach a critical period before triggering Article 50".

In a tweet, McGuinness confirmed the conversation but refused any plea for a rethink.

"In conversations this morn with The British PM & her Sec.of State I said society & I felt badly let down by both the DUP & the British Govt," he tweeted.

May has promised to launch the formal procedure for leaving the EU by the end of March at the latest.