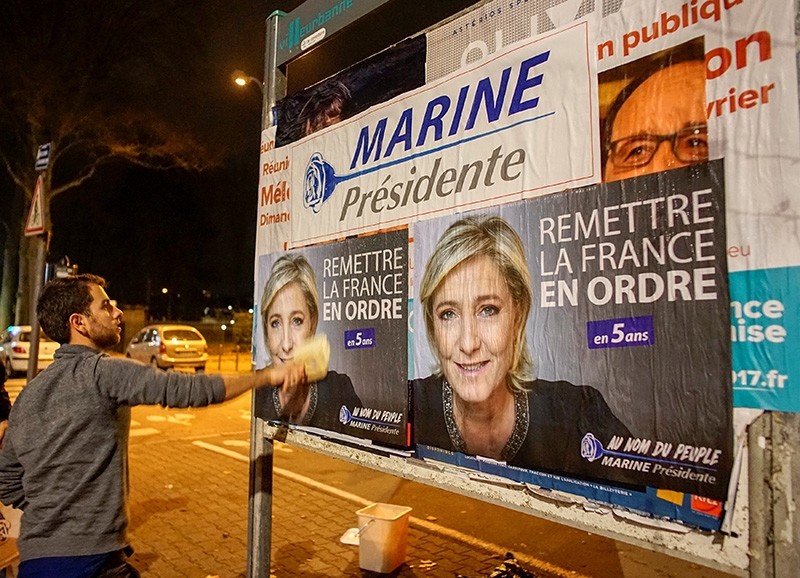 Members of the National Front youths put up posters of Marine Le Pen, ahead of a 2-day FN political rally to launch the presidential campaign in Lyon, France, February 2, 2017. (Reuters Photo)
by Feb 04, 2017 12:00 am

Opinion polls see the 48-year old daughter of National Front (FN) founder Jean-Marie Le Pen topping the first round on April 23 but then losing the May 7 run-off to a mainstream candidate.

But in the most unpredictable election race France has known in decades, the FN hopes a two-day rally in Lyon, where Le Pen is spelling out her electoral platform, will help convince voters to back her.

"The aim of this program is first of all to give France its freedom back and give the people a voice," Le Pen said in the introduction to the manifesto.

Emmanuel Macron, a pro-European centrist candidate whom polls say might be Le Pen's opponent in the run-off, will also hold a rally in Lyon on Saturday to propose a radically different platform.

"This presidential election puts two opposite proposals," Le Pen said. "The 'globalist' choice backed by all my opponents ... that wants to abolish all borders...and the 'patriotic' choice which I personify."

Buoyed by last year's unexpected vote to take Britain out of the EU and Donald Trump's election in the United States, the FN hopes to ride the same populist wave to victory.

If elected, Le Pen says she would immediately seek an overhaul of the European Union that would reduce it to a very loose cooperative of nations with no single currency and no border-free area. If, as is likely, France's EU partners refuse to agree to this, she will call a referendum to leave the EU.

The electoral manifesto is short on macro-economic details and does not give any public deficit or debt targets and does not explain how a Le Pen government would balance raising welfare benefits while cutting taxes.

The FN would combine leaving the euro with unorthodox policies including money printing, currency intervention and import taxes, Jean Messiha, who has overseen the drafting of Le Pen's manifesto, told Reuters ahead of the rally.

The Lyon rally is also bound to focus on militant threats facing France, with the FN quick to react on Friday to an attempt by a machete-wielding man to enter the Paris Louvre museum. FN officials said it proves France must reinstate border controls and be tougher on radical Islam.

While Le Pen is hoping to benefit from an unpredictable campaign that has seen the favorites drop out one after the other and that has caught up with hitherto favorite Francois Fillon, embroiled in a scandal over alleged ghost jobs for his wife, opinion polls still see her losing the second round.

But that leaves grass-roots supporters undeterred. "The rally will show people are backing the National Front and our ideas," said Victor Birra, the regional head of the FN youth association. "We're fighting to win the 2017 election," he said, before driving around Lyon to put up posters for the rally.

Le Pen and her party are also facing their own scandals, including one over assistants in the European Parliament and investigations over her 2012 campaign financing.

Here are the main proposals from Le Pen's election manifesto:

6 MONTHS TO RENEGOTIATE THE EU OR GO FOR "FREXIT"

* Election to be immediately followed by six months of talks with EU partners with the aim to radically change France's membership and turn the bloc into a loose cooperative of countries: no more euro, border-free area, EU budget rules or pre-eminence of EU law.

* Referendum on EU membership at the end of the 6 months. Le Pen to recommend leaving if does not manage to radically change the bloc. Most likely scenario is therefore "Frexit."

* Would be accompanied by some form of loose monetary cooperation which could for instance manage exchange rate fluctuations.

* Public procurement to be open only to French firms as long as the price difference is not too big.

* To rebuild France's industrial base, sellers of imported goods would not be allowed to pass on all of the value-added sales tax to consumers as they do now, Messiha said.

* Lower retirement age to 60 from the current 62, increase aids to the poorest of the elderly. Give child benefits to all without conditions of resources. Cut by 5 percent the regulated price of gas and electricity.

* Allow each parent to give each of their children 100,000 euros tax-free every five years.

* Reserving certain rights now available to all residents, including free education, to French citizens only, which would be put to voters via referendum.

* Employers who hire foreigners to pay a tax worth 10 percent of the salary paid to those people, Le Pen's deputy Florian Philippot said.

* Make it impossible for undocumented migrants to legalize their stay in France.

* Curb asylum to requests made abroad, in French consulates.

* Make it much harder to become a French citizen -- being born in France would give no right to citizenship anymore.

* Allow referendums to be organized on issues called for by 500,000 citizens.

* Cut the number of lawmakers by nearly half.