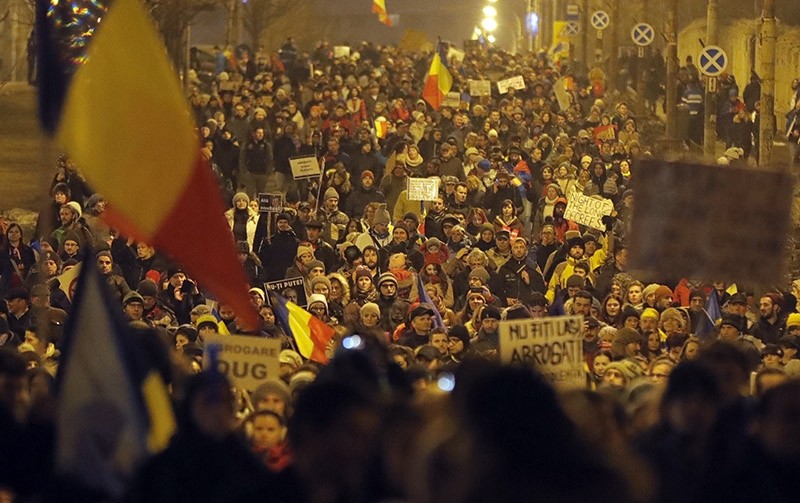 Demonstrators march in front of the government building during a protest in Bucharest, Romania, Saturday, Feb. 4, 2017. (AP Photo)
by Compiled from Wire Services Feb 04, 2017 12:00 am

Buckling under the pressure of nationwide protests, Romania's government Saturday promised to withdraw a controversial decree with which it would have relaxed anti-corruption rules for officials.

Prime Minister Sorin Grindeanu said the decree, which triggered daily protests since it was passed late night Tuesday and drew international criticism, will be repealed in a cabinet meeting on Sunday.

"We will repeal, cancel the decree in an emergency meeting Sunday," Grindeanu said, stressing that it will "not take effect."

"I don't want to divide Romania ... Romania in this moment seems broken in two," Grindeanu said.

The Constitutional Court is expected to rule next week on whether the measure was legal.

The leftwing government, which has been in office barely a month, also wants in a separate decree to free some 2,500 people from prison serving sentences of less than five years.

This prompted five straight days of protests including up to an estimated 300,000 on Wednesday night nationwide, the biggest since the ouster of Ceausescu and the communist system in 1989.

Grindeanu says that the measures are to bring penal law into line with the constitution and reduce overcrowding in prisons.

But critics say that the real aim is to let off some of the several thousand officials and politicians ensnared in a major anti-corruption drive in recent years, many of them from Grindeanu's Social Democrats (PSD).

Earlier this week Brussels, which had previously praised European Union member Romania for its efforts on graft, warned against "backtracking".

The U.S. State Department said it was "deeply concerned" that the new measures "undermine rule of law and weaken accountability for financial and corruption-related crimes".

Grindeanu said Saturday that the penal code still had to be brought into line with the constitution.

"We will probably eliminate the 200,000-lei ceiling and send a bill to parliament as soon as possible," he said.

"There has been a lot of confusion and distortion created. Things have not been well explained."
Last Update: Feb 04, 2017 10:41 pm
RELATED TOPICS