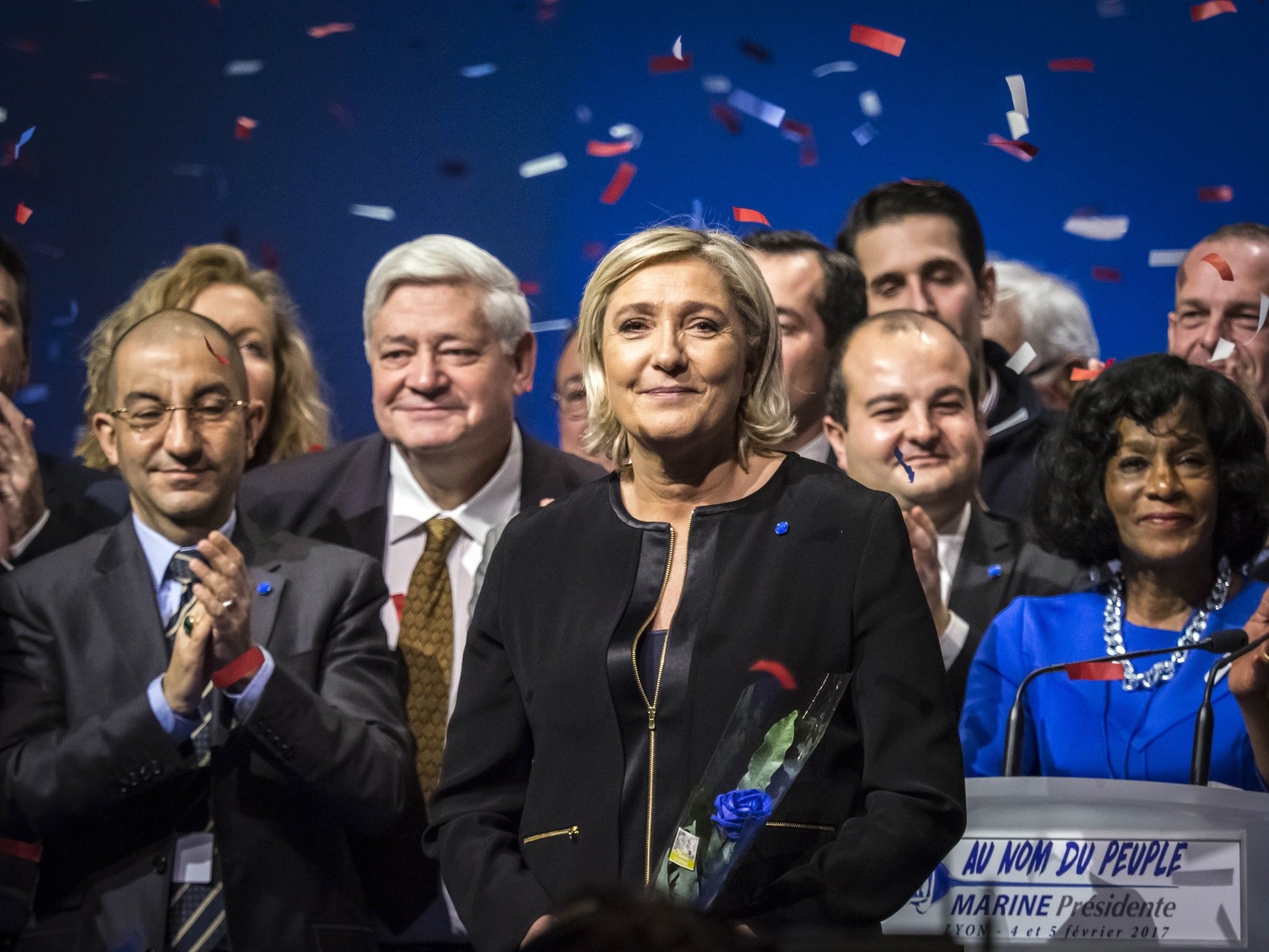 French far-right leader Marine Le Pen promised her supporters to fight against the European Union, mass immigration as well as radicalization, what she described as "Islamic fundamentalism" as she launched her bid for the French presidency on Sunday in the city of Lyon.

To applause and cries of "On est chez nous" (We are in our land), Le Pen served up the grand themes of the party that have made her a leader in early polls of the spring presidential election.

"If the EU does not submit, then I will ask the French to vote in the referendum to resign from this nightmare," she told a crowd of some 3,000 supporters from her National Front party as a two-day rally came to a conclusion.

A referendum on a so-called Frexit along the lines of the British vote in June 2016 to leave the bloc is a cornerstone of her campaign.

She also questioned France's role within the military alliance NATO, saying the country should not be dragged into wars that were not her own.

A now familiar target of her rhetoric also featured in Sunday's speech. "We do not want to live under the yoke or the threat of Islamic fundamentalism," she said.

Le Pen's manifesto makes the bold promise of "putting France back in order within five years."

The National Front has taken heart in the disarray of the left with the unpopularity of Socialist President Francois Hollande who decided not to seek a new mandate.

The right's leading candidate, Francois Fillon, has been caught up in a corruption scandal, opening the way for maverick centrist Emmanuel Macron - who could face off Le Pen. The chances for Macron, a rebel from the Socialist Party, were unclear.

Le Pen has been a leader in early polls, which place her at the top in the April 23 first-round vote but not winning the May 7 runoff.

If elected, she envisions a "government of national unity" formed after June legislative elections.

Le Pen told the crowd at the congress center in the southeastern city of Lyon that globalization is "erasing" France and Islamic fundamentalism is "planting itself in some neighborhoods ... and vulnerable minds."

Le Pen listed Muslim veils, mosques or prayer in the streets of France as unacceptable cultural dangers that "no French person ... attached to his dignity can accept."

No one living in France illegally will be given papers or be able to acquire the French nationality, she said.

"When you arrive in a country, you don't start violating laws, demanding rights," she said in reference to what she calls "massive immigration."

"There will be no other laws and values in France but French."

Le Pen rejects free-trade agreements like the ones between the EU and Canada (CETA) and the US (TTIP), instead calling for "intelligent protectionism," echoing the policy pledges of Trump.

Polls predict that the 48-year-old party leader will reach the second round in the elections, although she remains well behind Macron in
polls regarding the decisive presidential election in May.

The leading conservative candidate, Francois Fillon, has become embroiled in a scandal involving his wife possibly receiving state funds for work she may not have done and has plummeted in the polls.

On Sunday, Benoit Hamon was also nominated as the candidate for the Socialist Party, which is struggling to regain popularity.