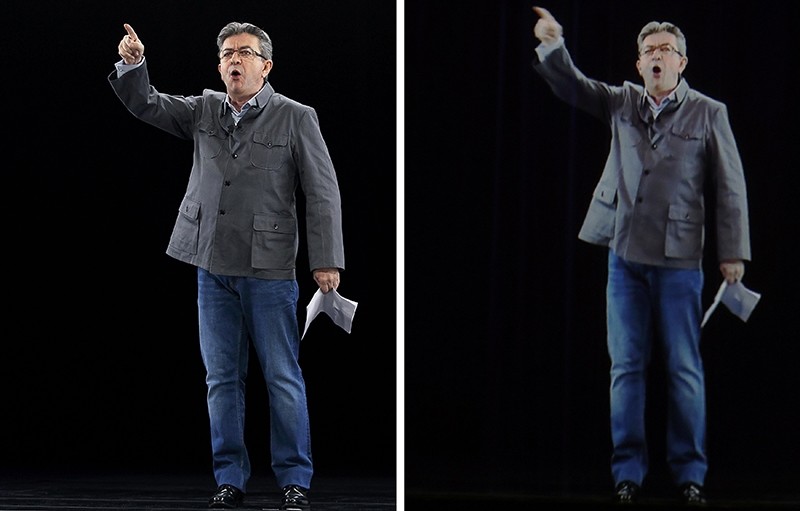 Melenchon and his hologram appeared in Lyon and Paris at same time during a double live rally. (REUTERS Photo)
by Feb 06, 2017 12:00 am

French far-left candidate Jean-Luc Melenchon appeared to supporters by hologram on Sunday in a technological first for a presidential campaign in France.

Melenchon was speaking in person in the central city of Lyon, but with a click of his fingers, he also appeared to 6,000 supporters in a concert hall 450 kilometres (280 miles) away in Paris.

Despite a slightly muffled voice, the appearance passed off without a technical hitch.

Many in the crowd in the capital clapped and rose to their feet to take pictures with their phones as the hologram of the candidate strode back and forth in jeans and grey tunic as he gave a typically fiery address for over an hour.

Lyon, where he made his physical appearance, was also the weekend launch pad for the campaigns of far-right leader Marine Le Pen and fast-rising centrist Emmanuel Macron, who also drew thousands of supporters.

Melenchon came in fourth in the 2012 election behind his arch-nemesis Le Pen.

Backed by the Communist party, the 65-year-old wants to dump France's presidential system for a parliamentary system and renegotiate EU treaties, and has bashed the outgoing Socialist government for pushing labour market reforms through parliament last year despite protests.

He reserved particular scorn for Macron, a former investment banker who as economy minister helped pilot the reforms designed to make it easier to hire and fire workers.

"Macron has ruined the lives of thousands of people," Melenchon said.

Benoit Hamon, the radical leftwinger who the Socialists have chosen as their candidate, has appealed to Melenchon to join forces with him in a bid to pool their votes and avoid a humiliating exit for the Socialist in the first round of the election in April.

Pierre Vila, a 49-year-old Melenchon supporter at the Paris hologram rally, said he was opposed to such an alliance.

"I no longer have any confidence in the Socialist Party," he told AFP.