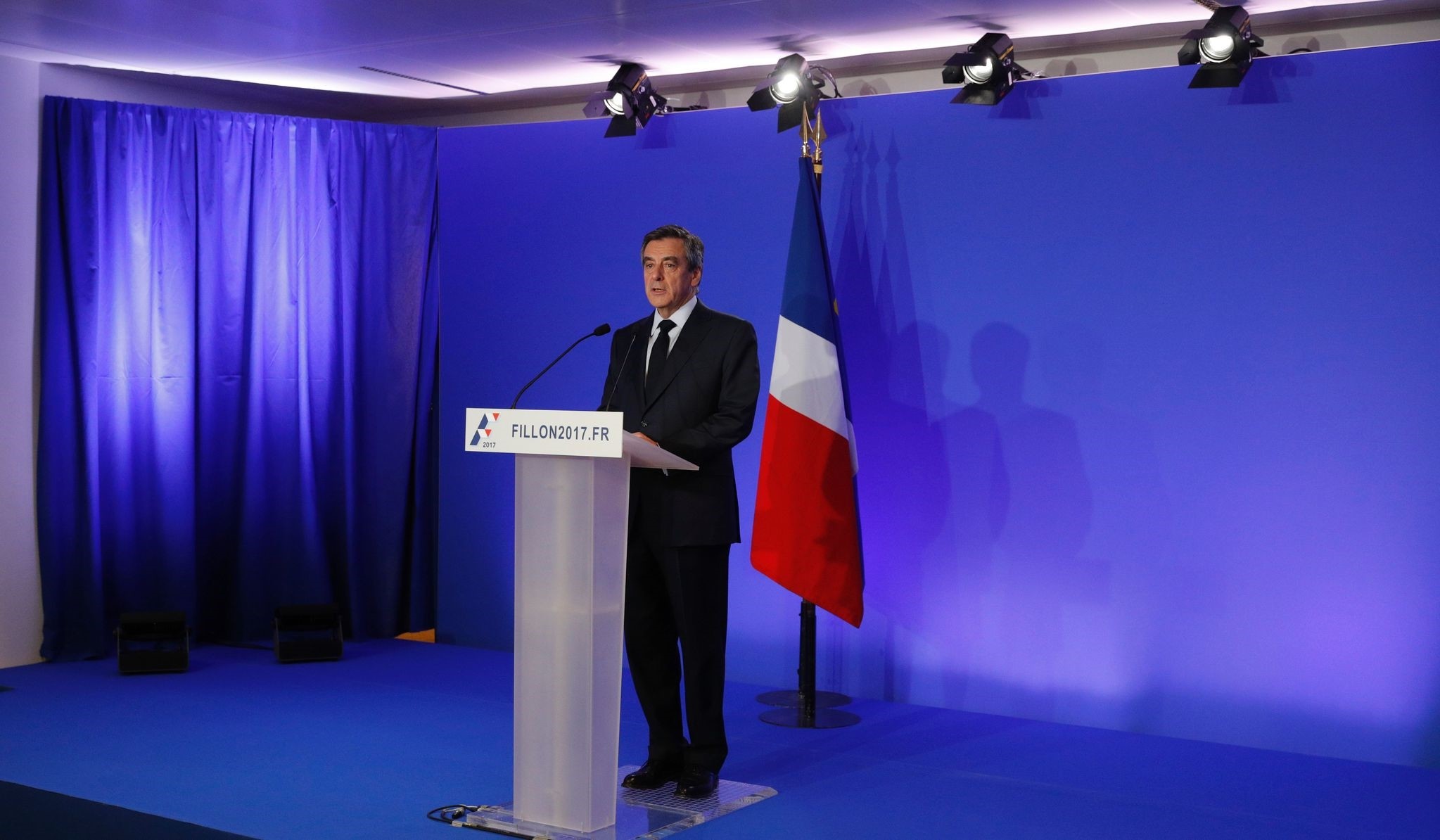 French rightwing presidential candidate Francois Fillon on Monday apologized for hiring his wife as a parliamentary aide, admitting he made an "error" but refusing to quit the race.

Fillon's presidential bid has been floundering since it emerged that his British-born spouse was paid over 800,000 euros ($860,000) from public funds between 1998 and 2013 as a parliamentary assistant.

"It was an error, I profoundly regret it and I apologize to the French," a combative Fillon told a press conference while insisting he had done nothing illegal and that his wife Penelope's earnings were "justified."

Fillon, 62, said he had hired family members - as allowed in France - out of "trust" but recognized that such practices "create distrust nowadays".

Addressing allegations that Penelope did not actually perform any duties, Fillon said: "No-one has the right to judge what a parliamentary assistant's job consists of, except the MP himself."

He said his wife had worked constantly to assist in his constituency business and that her average monthly salary of 3,677 euros (around $4,000) after tax over the period was "perfectly justified" given her training in law and literature.

He again presented himself as the victim of a smear campaign and ruled out stepping back in favor of another Republicans party candidate, saying there was no "Plan B'.

"I am a candidate for the presidency to win it," he said.

Fillon's remarks were an attempt to bury a scandal that has dogged his campaign for nearly two weeks, triggering a preliminary probe into possible misuse of public funds.

A devout Catholic who won the nomination of the Republicans party in November on a pledge to slash public spending, Fillon had been the presidential frontrunner before the scandal broke.

Le Monde reported Monday that investigators were also examining Fillon's ties to Marc Ladreit de Lacharriere, the owner of a literary magazine who is also suspected of paying Penelope for a fictitious job.

The investigators are looking at whether the owner of the Revue des Deux Mondes magazine paid her around 5,000 euros a month pre-tax between May 2012 and December 2013 in return for being recommended by Fillon for France's highest honor, the Grand Cross of the Legion of Honour, in 2010.

In a statement to AFP, Ladreit de Lacharriere said Penelope Fillon's work for the magazine "was in no way fictitious" and said he was "very shocked" to see it being linked to the Legion of Honour.

The scandal appears to have cost Fillon crucial support, three months before the French begin voting in an election characterized by the kind of anti-establishment anger that fuelled Brexit and Donald Trump's rise to the White House.

Polls now show the former frontrunner crashing out of the first round in April, leaving far-right candidate Marine Le Pen and rising star Emmanuel Macron, a centrist, to battle it out in May's runoff vote.

Fillon's listing poll numbers have created alarm in his camp, leading some members of his party to call for a replacement candidate.

Some have suggested 71-year-old Alain Juppe, the runner-up in the Republicans primary, should step forward.

On Monday, Juppe again ruled out taking over from Fillon.

"I've set out my position... No means no," Juppe told reporters in the southwest city of Bordeaux, where he is mayor.

Le Figaro quoted an unnamed Republicans lawmaker as saying that, despite his public renunciations, Juppe could be persuaded to step in if Fillon, 62, bowed out.

"Juppe will only go for it if there is consensus," the source was quoted as saying.