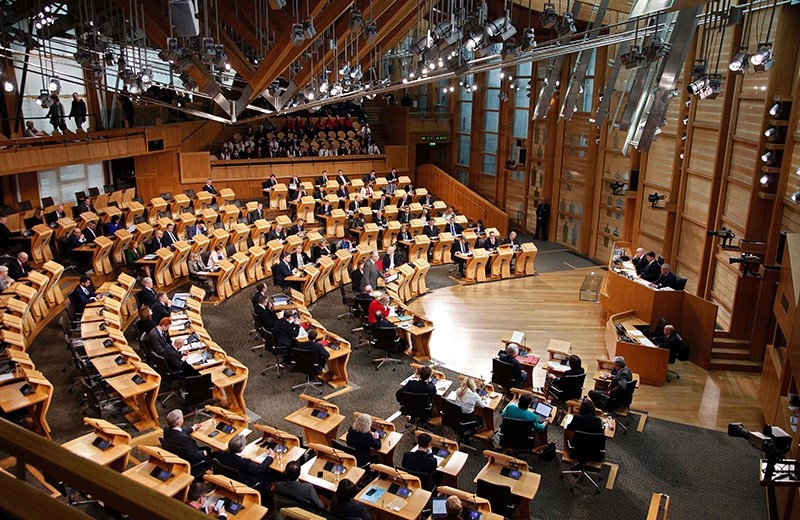 The Scottish parliament, in a symbolic motion, voted overwhelmingly on Tuesday to reject Britain's march towards the EU exit, with the semi-autonomous government warning Scotland would not be "humiliated".

The Scottish government said the vote - backed by nearly three quarters of Scottish lawmakers from across the political spectrum - is one of the most important in the parliament's 18-year history.

Minister for Brexit Negotiations Mike Russell said his government will "never allow Scotland to be humiliated, and its democratic choice rejected. We will never, ever, turn our back on Europe and the world."

He said there was still time for London to avert another independence bid by Scotland if it accepted a "compromise" - a differentiated solution that would keep Scotland in the European single market even as the rest of Britain leaves.

British lawmakers are debating a bill that would empower Prime Minister Theresa May to begin the country's withdrawal from the European Union (EU).

The Scottish Parliament voted by 90 votes to 34 that the draft legislation should not proceed as Edinburgh has received no commitment that it will be effectively consulted on the exit terms.

The vote has no legal force, however.

The only dissenters were the Scottish Conservatives, who are aligned with May's Conservative government in London.

"This is the Scottish Parliament. The people that voted for us are Scottish voters, they expect us to stand up for Scotland," Russell said.

Scotland was told it would be an "equal partner" in the British union if it rejected independence, which it did by 55 percent in a 2014 referendum.

Twenty months later Scotland voted to remain in the EU by 62 percent, but it was outvoted by England which has a vastly larger population. Brexit succeeded overall with 52 percent of the vote.

British judges ruled in January that a convention designed to deter London from imposing laws on Scotland carried no legal weight, clearing the way for the UK government to trigger Brexit without consulting Edinburgh.

A majority of MPs on Monday rejected amendments to the Brexit bill which called for greater involvement of the devolved administrations.

Lawmakers voted against guaranteeing they be consulted before Prime Minister Theresa May signs any agreements with Brussels, or delaying starting exit proceedings until at least one month after the devolved administrations have agreed to a UK strategy.

The Scottish parliament vote sends a clear signal to London that the Brexit process is proceeding without their support, but the UK government has no compulsion to listen.

"We're going to keep talking and make sure that we go on talking so the Article 50 letter can still be influenced by the reasonable demands of Scotland," Russell said.

A British government spokesman said: "The UK government will continue our engagement with the Scottish government and with people and groups across Scotland as we prepare to leave the EU to secure the best deal for Scotland and the UK."

Support for Scottish independence rose last month after British Prime Minister Theresa May came out in favor of Britain making a clean break with the European Union, a BMG survey for Herald Scotland showed on Wednesday.

It indicated 49 percent of Scots now support independence - a 3 point rise from a previous poll - with 51 percent opposing it, after "don't know" votes are removed.

However, a majority - 56 percent to 44 percent - still oppose holding another independence vote before Britain leaves the EU.

In 2014, Scots voted roughly 55 percent to 45 percent to remain in the United Kingdom. But last year's Britain-wide vote to leave the EU changed the landscape.

Scottish Greens lawmaker Ross Greer, who backs the devolved nationalist government on independence, told Reuters on Monday that Scotland was almost certainly headed to a new independence referendum after the UK triggers the process to leave the European Union.

A report by Dundee-based newspaper the Courier said that May believes Scottish First Minister Nicola Sturgeon is two weeks away from demanding a second referendum on independence.

It said May is privately working a strategy to deal with this.

Scotland has a population of around 5.3 million, according to the last census, slightly more than 8 percent of the United Kingdom's population as a whole.