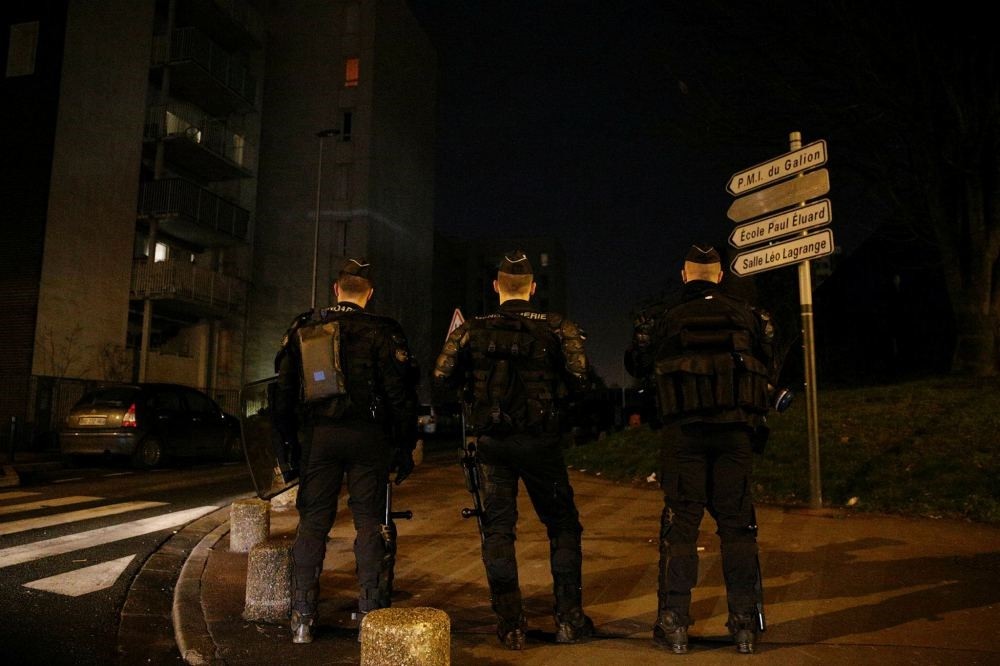 French policemen stand guard at the Rose des Vents district in Aulnay-sous-Bois, northeast of Paris.
by Compiled from Wire Services Feb 09, 2017 12:00 am

Amid growing political uncertainty over the upcoming presidential election, serious rioting in Paris suburbs spreads to new areas as French police arrested a dozen people on a fourth straight night of confrontation with youths

Violence spread in Paris's northern suburbs for a fourth night and French police arrested a dozen people, police said on Wednesday, amid accusations that police officers raped and beat a man they were detaining.

Police initially detained 26 people during the pre-dawn outburst in which a police car and other vehicles were set afire in Aulnay-sous-Bois, a working class suburb northeast of Paris. At one point, police encircled by an angry crowd fired warning shots into the air using real bullets, according to French press reports. No injuries were reported.

Dozens of vehicles and a nursery school were set on fire by youths during standoffs with police in an area of Paris. As well as damaging the nursery school and a car sales outlet, youths had also used a shopping trolley full of petrol bombs, police said.

The trouble began in Aulnay-sous-Bois on Feb. 2 where four police officers were accused of using excessive force while arresting a 22-year-old man, including raping him with a baton. One of the police officers involved in the man's arrest on Feb. 2 has been placed under formal investigation for suspected rape and three others for unnecessary violence.

"For the moment we're talking of very violent but isolated standoffs," said Luc Poignant from the SGP police union.

Authorities are wary of unrest in France's poor towns, remembering the fiery 2005 riots that spread through France — beginning in the Paris suburb of Clichy-Sous-Bois and hopscotching through social housing around the country.

The latest violence was a show of outrage in support of a young black man who authorities allege was sodomized with a police officer's baton last week during a spate of identity checks as part of a police operation targeting drug traffickers. One officer was charged Sunday with aggravated rape and three others were charged with aggravated assault.

The standoffs are playing out against a backdrop of growing political uncertainty in France, where far-right leader Marine Le Pen leads the pack of candidates to succeed Hollande in May and conservative standard bearer Francois Fillon has been hit by accusations he had his wife paid by the state for a fake job.

Aulnay-sous-Bois is one of several areas where riots erupted in 2005 after two teenagers who fled from police in the nearby neighborhood of Clichy-sous-Bois died from accidental electrocution in a power station where they had hidden.

That incident sparked three weeks of rioting in which 10,000 cars and 300 buildings were set on fire, prompting the then interior minister, Nicolas Sarkozy, to declare a state of emergency and drawing attention to the contrasts between Paris and the bleak suburbs around it.

In Aulnay, where an unemployment rate of 19 percent is near double the national average, petrol bombs were thrown and police used tear gas in confrontations around a sprawl of buildings that were built in the late 1960s to house car factory workers. The factory closed in 2013.
RELATED TOPICS