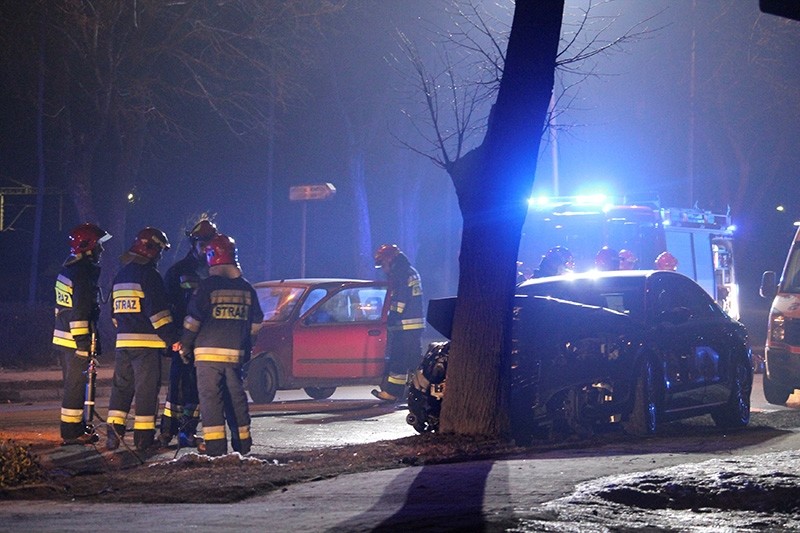 Prime Minister Beata Szydlo suffered injuries in a car crash in southern Poland on Friday and was flown by helicopter to Warsaw for medical tests, even though doctors and her spokesman said that she was not badly hurt.

The accident occurred shortly before 7 p.m. in the southern town of Oswiecim, which is Szydlo's hometown. Szydlo, 53, was traveling in a convoy along the town's main road when another car drove into her black Audi limousine, causing it to hit a tree.

The state broadcaster TVP published an image of the limousine with the front of the car bashed in.

Government spokesman Rafal Bochenek said Szydlo was in "good condition" but had been transported 350 kilometers (215 miles) by helicopter to a government hospital in Warsaw for further monitoring and tests.

The car that hit the prime minister's vehicle was a small Fiat driven by a 21-year-old man who was sober, said Sebastian Glen, a police spokesman. Two security officers, one of whom was the car's driver, were also taken to a hospital with injuries.

Dr. Andrzej Jakubowski, who examined Szydlo in the hospital in Oswiecim, a town of 40,000, said she was stable and conscious all the time and was talking and "very strong" given the trauma. Jakubowski said Szydlo suffered some injuries to her body but that the prognosis is good.

In Warsaw, Jaroslaw Kaczynski, the head of the governing party, Law and Justice, said during a speech to supporters that "I must start from the sad news that there has been a car accident in which the prime minister and Government Protection Bureau officers were seriously hurt."

"We are with you, Beata," Kaczynski said. "And we are convinced that after a short stay in the hospital you will be with us again, you will be at the head of the government."

Oswiecim is best known to the world by its German name, Auschwitz. It is the town where Nazi Germany ran the death camp in occupied Poland during World War II and today is the site of a memorial and museum that draws large numbers of visitors.

Poland's interior minister called an emergency meeting with the leadership of the Government Protection Office, which protects and drives Szydlo and other top figures. Meanwhile, prosecutors also opened an investigation.

It was the latest in a string of road incidents involving top state officials.

In November, several vehicles in a Polish government convoy collided during a state visit to Israel. Szydlo was not in one of those that collided but two other Polish officials had minor injuries.

In March 2016, a limousine carrying President Andrzej Duda skidded into a grassy ditch due to a punctured tire. Duda was unhurt.