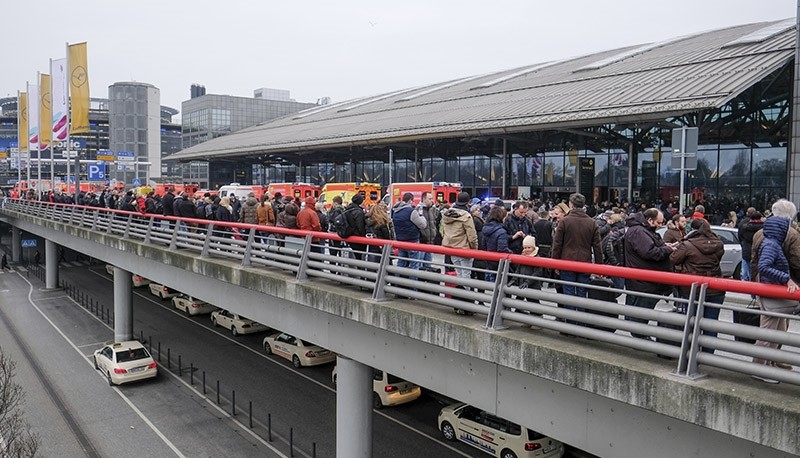 Travelers wait outside the Hamburg, northern Germany, airport Sunday, Feb. 12, 2017 after several people were injured by an unknown toxic that likely spread through the airport's air conditioning system. (AP Photo)
by Compiled from Wire Services Feb 12, 2017 12:00 am

German authorities on Sunday briefly closed the airport in the northern city of Hamburg after a discharge of a corrosive substance that likely spread through the airport's air conditioning system caused eye irritation and breathing difficulties among 50 people in a security check area, a police spokeswoman said.

Firefighters and ambulances were rushed to the scene after the incident, which occurred in an area where passenger luggage is scanned by security staff.

Firefighters are trying to determine the source of the discharge and the nature of the corrosive substance.

More than 50 people — both passengers and staff — had complained about breathing problems, burning eyes and nausea. Firefighters were examining them to find out whether they had to be taken to the hospital, the German news agency dpa reported.

Lightly dressed passengers were rushed outside the terminal but were allowed back in shortly after, the police spokeswoman said.

Those who were evacuated from the airport but not injured had to wait outside the terminals in freezing temperatures.

All flights were halted for several hours due to the evacuation, but air traffic started running again around 2 p.m., airport spokeswoman Karen Stein said.

According to live flight tracking website flightradar24.com some flights were diverted to other airports after the incident.

Last year, about 16.2 million passengers passed through the Hamburg Airport, which is Germany's fifth biggest airport.