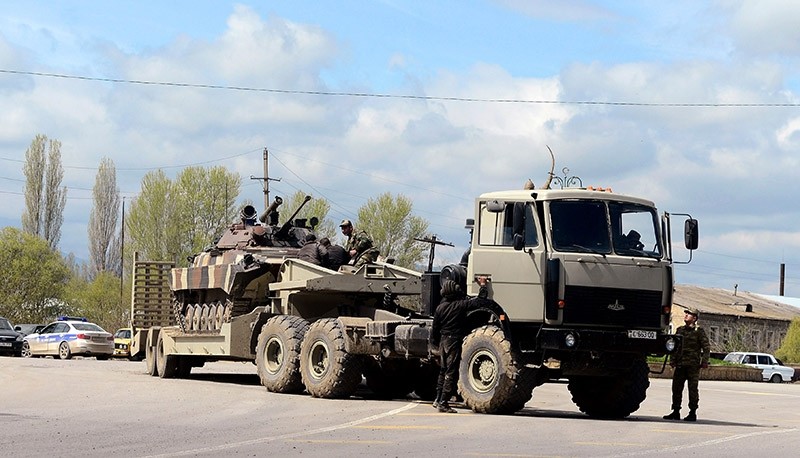 An Azerbaijani military armoured personnel carrier (APC) is seen on the platform of a truck in the town of Terter, Azerbaijan in April 2016. (AFP File Photo)
by Daily Sabah Feb 13, 2017 12:00 am

Azerbaijani defense minister released camera footage on Sunday showing the elimination of a group of Armenian soldiers, thought to be a reconnaissance-sabotage team, on the frontline in Karabakh.

The defense ministry said in its statement that the group of Armenian servicemen was bombed after being spotted by Azerbaijani forces.


The Azerbaijani ministry also said in a statement that they are in full control of the Karabakh contact line.

On the other hand, Sergeant Fuad Gafarov was reportedly killed on Saturday after Armenian artillery units shelled Azerbaijani positions on the frontline.

Azerbaijan and Armenia remain in dispute over the occupied Karabakh region. Despite being occupied by the Armenian military, Karabakh remains internationally recognized as a part of Azerbaijan.

Three UN Security Council Resolutions (853, 874 and 884), and United Nations General Assembly Resolutions 19/13 and 57/298 refer to Karabakh as being part of Azerbaijan.

Ethnic Armenians have occupied Karabakh, an enclave within Azerbaijan, since 1993.

During the dissolution of the Soviet Union, Armenian forces, aided by the weapons vacuum, former Soviet forces fighting as mercenaries on their side and local support, captured the former autonomous oblast of Karabakh along with large surrounding areas to its east and south.

Between April 1-5 2016, the skirmishes escalated into a four-day war, and the Azerbaijani military recovered over 2,000 hectares of land occupied by Armenian forces.